Is it time to start worrying about Corey Kluber?

The Statcast data surrounding the Klubot’s first two starts in pinstripes are mixed.

Share All sharing options for: Is it time to start worrying about Corey Kluber?

Corey Kluber’s first week as a Yankee has not exactly gone as fans, or the Yankees, have hoped. His first start on April 3rd against the Toronto Blue Jays was roughly what many expected — two runs (only one earned) on five hits, with five strikeouts and three walks in four innings and one batter. Unfortunately, his second appearance, this past Friday against the Tampa Bay Rays, was nothing short of a disaster. Kluber was knocked out of the game after only 2.1 innings, giving up five runs (three earned) on five hits with three strikeouts and two walks.

Obviously we’re dealing with a small sample size here, and Kluber is a notoriously slow starter, but how concerned should the Yankees be about the early returns for their free agent acquisition? A scout had this to say to Kristie Ackert of the New York Daily News:

Scout on Kluber's outing today: that's the best I've seen the Rays approach a pitcher yet this season and sloppiest defense by the Yankees. Not too worried about his velocity, but would keep an eye on slider velocity. #Yankees

As I mentioned in both our Corey Kluber free agent target post and our 40-man roster preview, Kluber has never been a power pitcher velocity-wise — his fastball has averaged in the 92-93 range for most of his career; on the other hand, both his fastball and his curveball/slider (different sites call the pitch different things) have regularly boasted among the highest spin rates in the game. So how has he looked so far?

That’s a noticeable drop, but not so massive that it should result in Kluber’s collapse. After all, Clayton Kershaw’s average spin rate on his curveball in 2020 was 2536, and Zack Greinke’s cutter had a spin rate of 2428. These are pitches that, used properly, can be used to great success. Thus, it should not be surprising to learn that the expected batted ball profile from these pitches are much better than their actual profile over the first two games.

This suggests to me that the pitches themselves have not been the problem. So what went wrong in the first two starts? Looking at the box scores again, the first figure that popped to my mind was the high amount of walks, almost one per inning, and three times his career average.

Extra baserunners are never a good thing. And unfortunately for the Yankees, in these first two starts, Kluber is walking batters at a rate that he never has in the month of April before.

A large part of this trend is because batters have chased fewer pitches outside the zone (only 27.5-percent chase rate, down from career mark of 34.2 percent). In particular, hitters have laid off pitches below the zone. 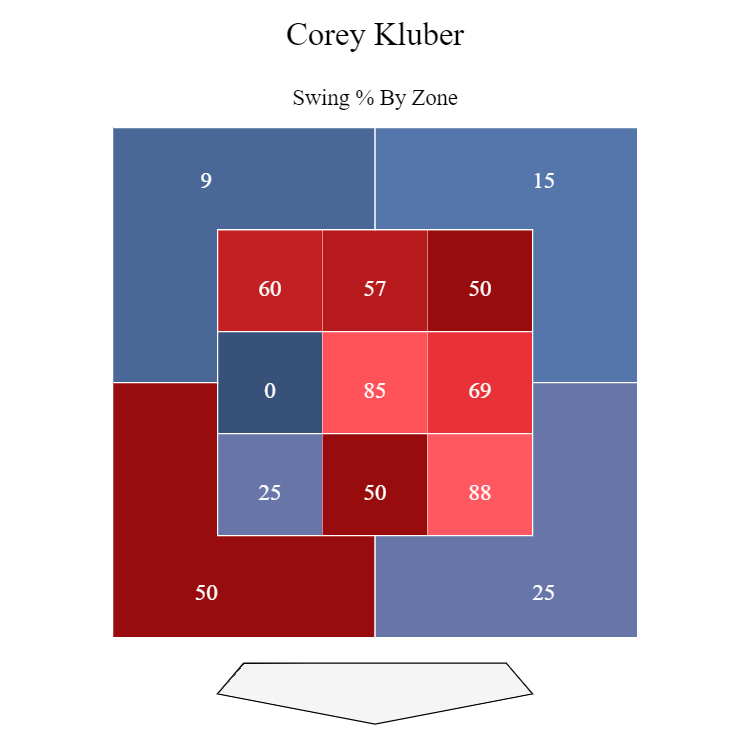 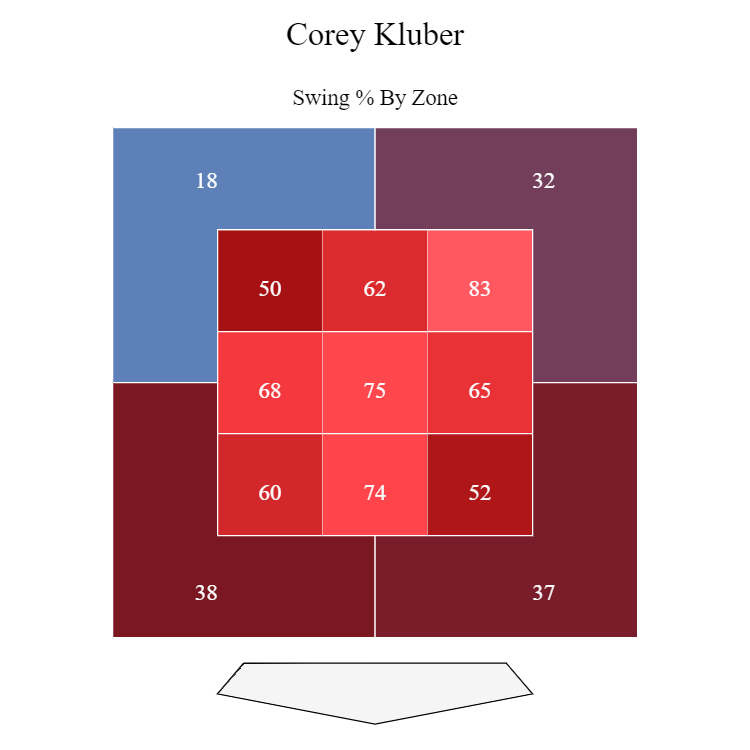 That said, we’re trying to extrapolate a lot of information out of only two early-season starts — just 6.1 innings and 136 pitches. In six months, we could simply look back to the first two starts and chalk up these numbers to a particularly bad outing against the Rays at Tropicana Field with remarkably bad defensive performances by Yankees fielders; or it could be the first signs that Kluber’s remarkable career is in its twilight. At the moment, there’s plenty of evidence for both conclusions.