Clint Frazier’s new approach has him primed for 2021

A change in plate discipline led to his breakout 2020

Share All sharing options for: Clint Frazier’s new approach has him primed for 2021

Ted Williams is perhaps the greatest pure hitter in the history of baseball, and also maybe the smartest. So many of his insights now dominate the game — the uppercut swing, the understanding that walks are good, actually, and a certain forgiveness for defensive lapses if the stick is good enough.

The most interesting insight Williams had on hitting, in my eyes, is the way he envisioned the strike zone. The rulebook might delineate a pitch in the strike zone as a hittable pitch, and an umpire might call a pitch a strike, but that doesn’t actually mean a hitter could make good contact with it. If your goal is to hit the ball hard in play, there is actually only certain parts of the zone that are conducive to doing that. Meanwhile, there are a whole bunch of potential strikes that hitters can’t really do much with.

Dallas Keuchel at his best kind of underscores this:

These are called strikes. One is barely inside the zone, the other is barely outside the zone. Either way, a hitter isn’t doing anything with those pitches. Gerrit Cole pitches this too, with high rising fastballs at the letters that travel above a hitter’s swing plane, and at worst, get fouled straight back.

The goal isn’t necessarily to swing at strikes, but to swing at the right strikes. Williams wrote about that specifically by breaking down the strike zone into 77 baseball-sized pockets:

There’s really only about a third of the strike zone that a hitter can do real damage on. If a ball is in any of those pockets, hammer it. If it’s not, wait for a pitch that is, and bet that a pitcher can’t locate three strikes in the “unhittable” pockets before he throws a mistake or walks you.

Now, on to Clint Frazier. I wrote last summer about how his shorter, more efficient swing was going to make him a better hitter, and while better mechanics are a big part of his breakout 149 wRC+ season, I think there was another factor at play:

Not only does Frazier boast a new and more efficient swing, he’s become a drastically more selective hitter — at the same rate, year over year, as Juan Soto, possibly the best hitter in the game today. We can look specifically at Frazier’s heat maps from 2019 and 2020, and see a striking similarity to that image from Teddy Ballgame: 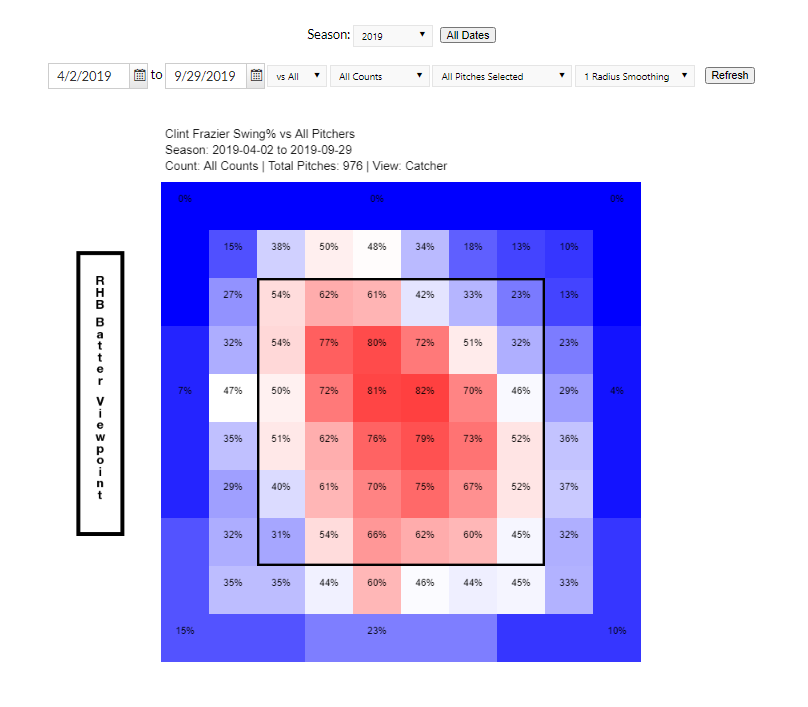 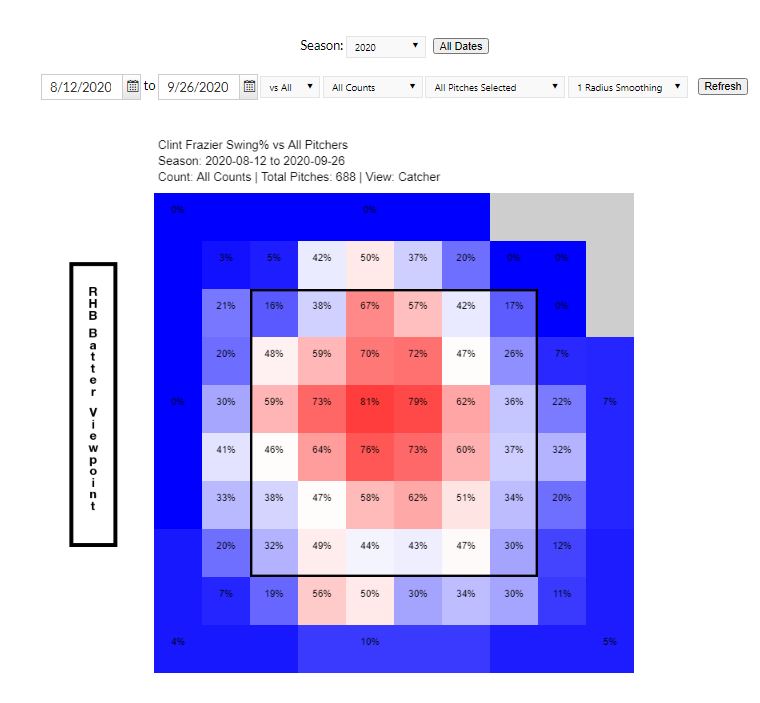 You can see for yourself how much more Frazier focused on the middle of the strike zone — his swing rate for pitches below the belt has dropped off significantly. That 2020 heat map is really similar to what we saw above, what Williams’ preached about understanding what pitches you can do damage on.

Take this box for example. It and the bucket below it are either in the strike zone or often called as being part of the strike zone, but it’s not that helpful to swing. Even if you make contact, you’re not doing it with the barrel of the bat. At best you tap the ball out to the pitcher and hope they mess up the throw to first. The ideal plate appearance doesn’t end with you tapping to the pitcher and hoping they mess up.

So, in 2020, Frazier went from swinging at those pitches 60-65% of the time, to less than 50%. He’s shifted his focus up in the zone, to pitches he can drive and do real damage with. If a pitcher can locate in that X three straight times, without missing his spot or throwing a ball, you tip your cap and move on. We have this idea that taking strikes is a bad thing, but it’s not as long as it’s done with the purpose of getting a better strike later.

The next step for Frazier, in my opinion, is making more contact on the pitches he does offer at. One of the differences between someone like Soto and Frazier is, Soto makes contact with about 89% of strikes he swings at, whereas Frazier makes contact about 82% of the time, and actually got a little worse from 2019 to 2020:

In a perfect world with perfect hitters, you’d see Frazier in the upper left quadrant — this would show that he became more selective with the pitches he swung at, while making more contact on his swings. We know that he’s attacking better pitches and spitting on worse ones. Now he just needs a more refined attack.

The good news in all this is these kind of approach, pitch-level changes, can often be very sustainable and repeatable. What pitches a hitter swings at is really the most basic level of control a batter has — he doesn’t have input on whether he sees a fastball or a slider, but he does choose whether to swing at a pitch or not. That Frazier combined conscious swing mechanic changes with this new approach to pitch selection is quite encouraging going forward.

Aaron Boone has talked about how Frazier is the starting left fielder for the Yankees, and I’ve written about how nervous I am that he might not start as many games as possible for the club. 2020 was the season he blossomed into the hitter we all thought he could be, and he did it by making really sustainable changes in approach and mechanics. The kid gloves should be off for Frazier in 2021 — he’s finally combined his natural talent with the adjustments major leaguers need to be able to make, and now we’ve got to see what he can do over 150 starts.