The Yankees seemingly have 4 options to acquire a proven lefty 1st baseman. Freddie Freeman and Anthony Rizzo can be signed through free agency, and Matt Olson and Josh Bell would need to be traded for.

In terms of offensive production over the last 3 years, Freeman and Olson are clearly in a class of their own at the top, with Rizzo and Bell in the next tier. Even so, Rizzo and Bell still rank in the top half of 1st baseman in each category.

Below are the 2022 FanGraphs Streamer600 projections for the following players

These projections are consistent with what the 2019-2021 stats say in that Olson and Freeman are the clear top 2 choices. 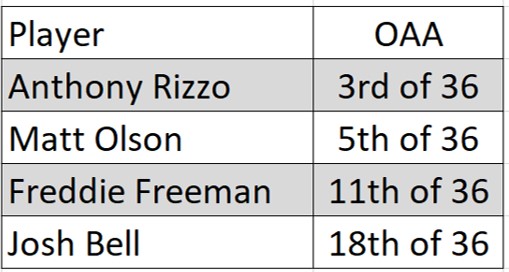 The Yankees have made it known that they look to improve their defense from 2021. Both Anthony Rizzo and Matt Olson are in the top 5 1st baseman of the last 3 years.

Of these 4 guys, Rizzo would benefit the most due to Yankee Stadium in terms of added homeruns from the past 3 years.

Freddie Freeman has played an incredible rate of over 98% in the last 3 years. The other 3 guys have played just under 90% which averages out to about 145 games in a 162 game season. 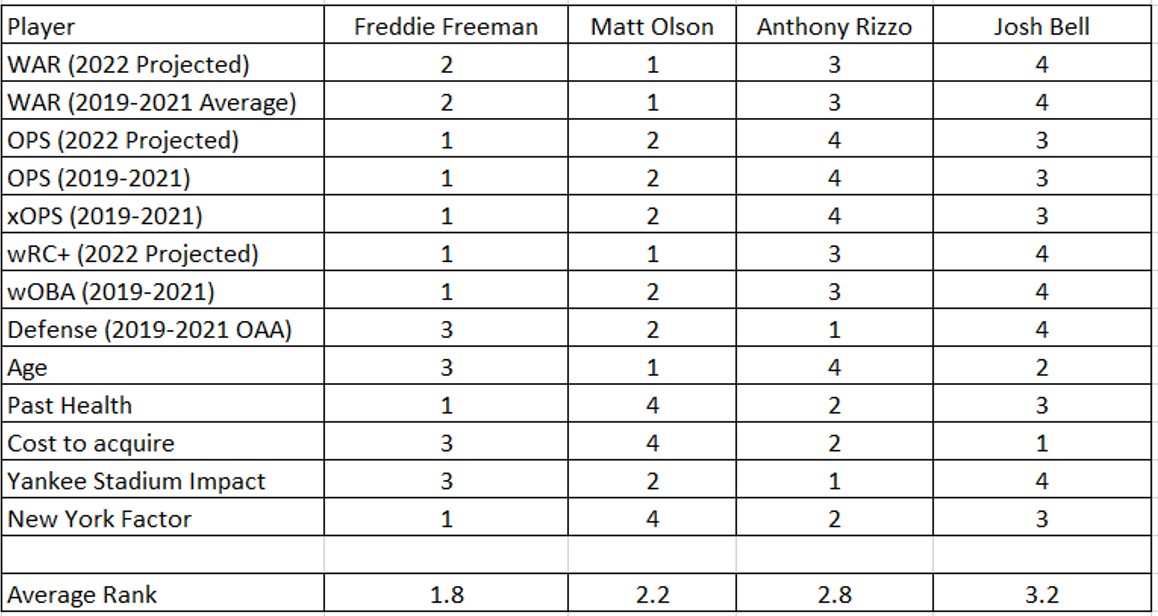 Totaling up various factors, Olson and Freeman still look like the clear top choices for the Yankees. However, I predict that Freeman will sign with the Braves. He has spent all 12 of his MLB seasons with them and has grown his family in Atlanta. Not to mention he just won the 2021 World Series with the Braves and is beloved by the fans. Looking at Olson, the Oakland A’s hold all the cards and will likely ask for a ridiculous amount of value in return for Olson. They do not need to trade him this offseason because they still have him under club control through the 2023 season. So, there is a very real possibility that both Freeman and Olson won’t be on the Yankees in 2022. If this is the case, their best option is to re-sign Anthony Rizzo.

A big emphasis of the Yankees this offseason is improving their defense, and of the 4 Rizzo ranked 1st in Outs Above Average over the last 3 years. In addition, his half of a season with the Yankees was consistent with his first half with the Cubs. This shows he was able to handle New York, and in addition also turned into a clubhouse leader. Although his recent offensive production as well as his projected is not as high as Olson and Freeman, he is still a top end 1st baseman offensively. Of these 4 guys, he is estimated to gain the most home runs by Yankee Stadium. There will continue to be rumors about almost every free agent to the Yankees, but in the end I believe they will re-sign Anthony Rizzo as their 2022 1st baseman.