Urshela’s regression at the plate in 2021 creates another problem the Yankees must solve this winter.

The story of the Yankees’ disappointing 2021 season was offensive underperformance almost across the board. Guys like DJ LeMahieu and Gleyber Torres get the bulk of the attention, though Gio Urshela isn’t blameless when it comes to the team’s offensive malaise. His regression in 2021 not only hurt the team this year, but creates a new set of problems going forward.

After posting a 132 and 133 wRC+ with solid defense in 2019 and 2020 respectively, it appeared the Yankees had found their third baseman of the future on a team-friendly luxury tax number to boot. But Urshela took a huge step back offensively in 2021, throwing the team’s long-term plans at the hot corner into uncertainty. With a 96 OPS+ and wRC+, Urshela graded out slightly below average at the plate with diminished power and run production.

Much of Urshela’s regression can be explained by a nosedive in quality of contact. He lost about two mph in exit average velocity relative to the previous two seasons. Urshela also batted at a launch angle roughly five degrees lower than the previous two seasons. The result: a career-high 47.8 percent groundball rate at the expense of fewer line drives and fly balls. 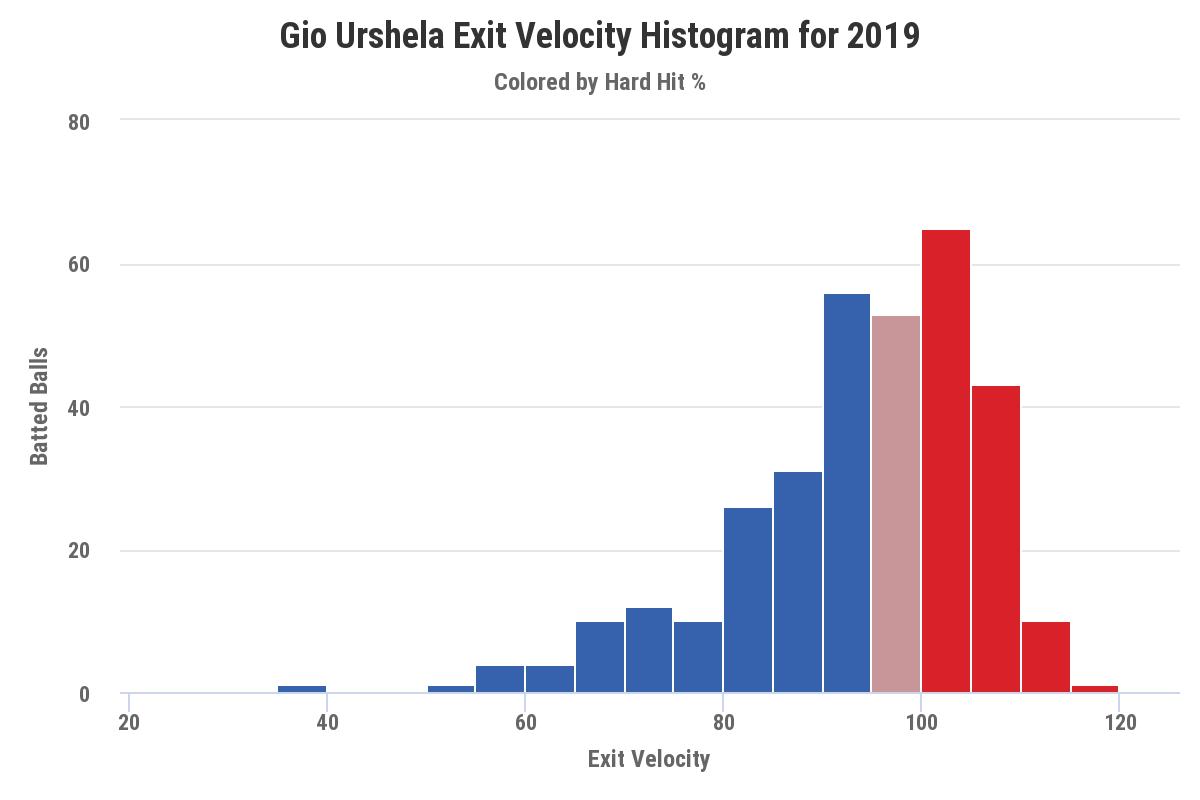 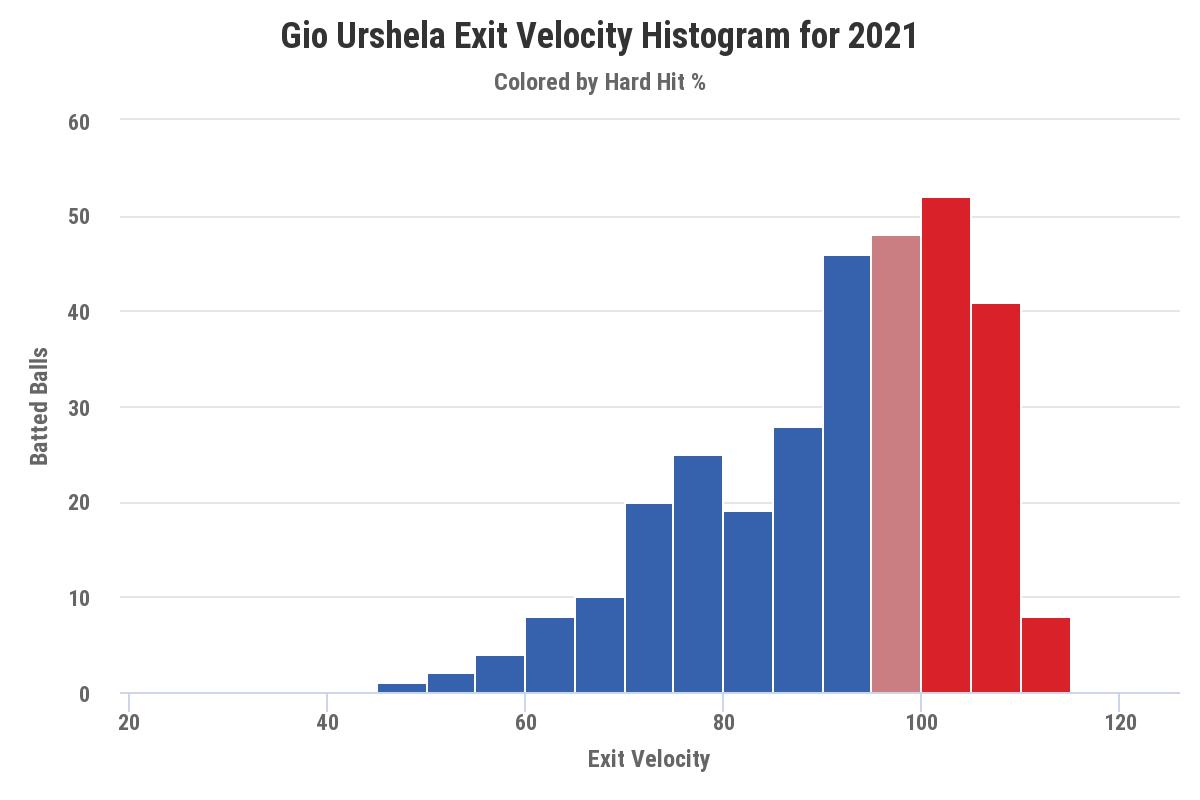 We can illustrate the drop off in batted ball quality by comparing Urshela’s exit velocity histograms from 2019 to 2021. Aside from a lower peak in the 100-105 mph bucket, notice the secondary peak right around 70-80 mph. A significant portion of Urshela’s batted balls were hit with a harmless exit velocity. A glance at his launch angle histogram tells a similar story. 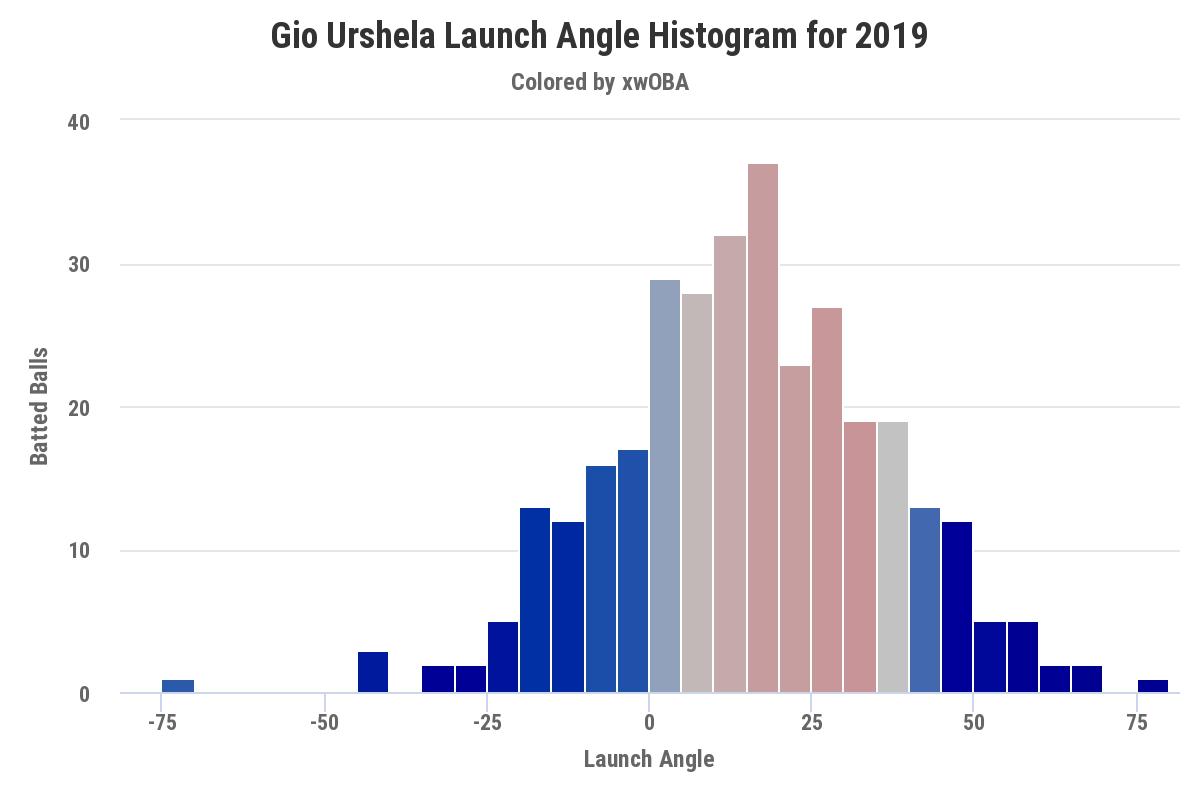 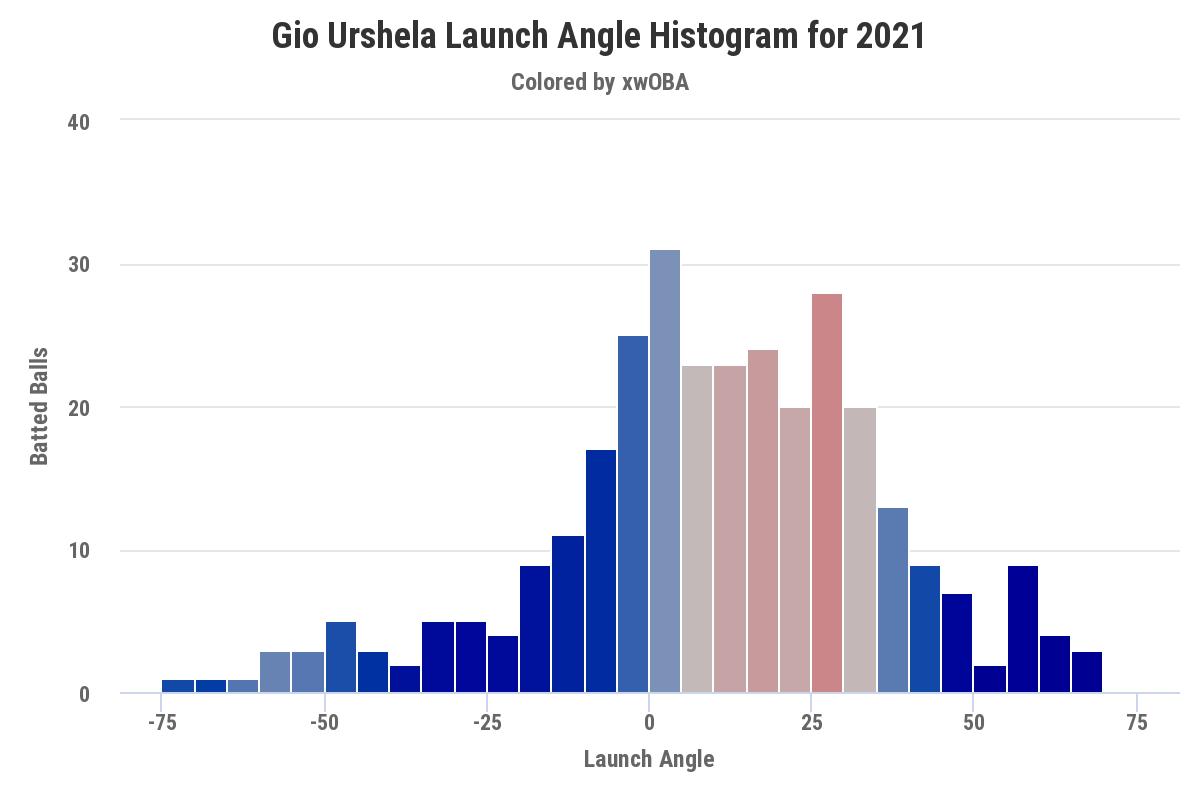 Again, compared to 2019, Urshela had a higher percentage of unproductive batted balls. This time, the largest peak occurs right around a zero degree launch angle. By now, I’m sure we’re all aware that balls batted at that angle (read: groundballs) cause the defense much less trouble than those batted with a higher launch angle.

Besides the drop-offs in batted ball quality, a general dip in overall contact also fueled Urshela’s down year. He struck out in 24.7 percent of plate appearances compared to a 17.2 percent strikeout rate in his first two years in pinstripes. His called-strike-plus-whiff rate climbed by about three points, while his chase rate went up a point and zone contact rate fell a point.

Unfortunately for Urshela and the Yankees, his down 2021 cannot be explained away citing bad luck. His .329 BABIP sat right in line with his career averages, while his wOBA and expected wOBA were nearly identical. In other words, he performed exactly how you might expect looking at batted ball and plate discipline.

As for Urshela’s defense, it wasn’t as sterling as you may have been led to believe. Statcast grades him out at -4 Outs Above Average at third, while FanGraphs is a little more split, assigning him -4 Defensive Runs Saved but 1.2 UZR/150 at third. It’s hard to square with several metrics labeling him a below average defender, but that’s completely understandable. The human brain is designed to remember the most salient memories, so of course you’re more likely recall his absurd diving catch into the dugout or Brooks Robinson showering praise on him, all while forgetting the groundballs he was too slow to reach or the throws that were a fraction late.

That brings us to the sticky situation of his salary. Urshela is entering his third year of arbitration eligibility and is projected to earn around $6.1 million. That’s not an insignificant amount for a team that is projected to exceed the luxury tax threshold (should it carry over into the next CBA) before signing a single free agent this winter. He’s also 30-years-old, missed almost a month with a hamstring injury, and had lingering knee problems all season. Therefore, it’s fair to say that Urshela could be on the bubble as the non-tender deadline approaches.

Last but not least, we have the question of the loaded free agent class of shortstops and the pair of infield prospects storming their way through the Yankees minor league system. Should the Yankees sign a Corey Seager for example, many have ticketed him for an eventual move to third base, which would facilitate Anthony Volpe or Oswald Peraza graduating to the majors. Urshela’s disappointing 2021 campaign only adds fuel to a scenario like the one mentioned above.