He was one of the best pitchers in the AL, yet we were still left wanting more.

On a personal level, this was the hardest grade to assign. I grappled with grading from an objective stance to grading relative to my preseason expectations. The grades rendered from each of those two viewpoints are radically different. Luckily, that’s why these player grades are an average across the whole staff — a larger sample size you might say. It quiets down the noise of outlier responses to arrive at a grade that more accurately reflects the performance of the player in question. And today that player is Gerrit Cole.

However, the Yankees didn’t sign Cole to simply be a top pitcher in his league. They signed him on the heels of an utterly dominant playoff run with the Astros where he looked untouchable in his five starts. Regular season performance is the prerequisite. New York opened the purse strings for a Postseason ace capable of dragging the team almost singlehandedly to the World Series. And in that, not only did he fail, his Wild Card dud torpedoed the team’s season. For that reason he can earn no higher than a B+, regardless of how he pitched in his other 30 starts.

Speaking of those other 30 starts, it wasn’t all smooth sailing. Aside from the Wild Card Game, Cole’s 2021 season will be defined by two unflattering episodes: being made the face of the Spider Tack controversy and his late season injury and collapse in form. Josh wrote about this in extensive detail earlier today, so there’s no point in me rehashing a lot of what he said, but it’s still worth it to review the salient points.

Cole started his season on an unrelenting tear, pitching to a 2.26 ERA and 1.93 FIP while striking out 104 batters in 75.2 innings across his first 12 starts. He was the presumptive AL Cy Young favorite only a third of the way into the season. Then came the June 5th memo.

For those who don’t remember, on June 5th, MLB sent out a memo detailing a plan to start on-field enforcement of the foreign substance ban. Strikeout rates across the league were just too high while spin rates were spiraling out of control (at least, that’s how MLB saw it). And Gerrit Cole was made the poster child of the league’s crackdown.

There’s no sugarcoating it. Cole’s RPMs took a nosedive after the June 5th memo. The drop-off is significant enough that we can’t attribute the difference to chance. His response when asked point blank if he used Spider Tack did not help his case.

Yet as Josh showed earlier today, Cole was still one of the most dominant pitchers in the league even with his sticky stuff taken away. Two of his best starts occurred after the memo — a three-hit, 12-strikeout complete game shutout of his former team in Houston and a 15-strikeout gem against the Angels. When he’s on like that, Gerrit Cole is probably still only one-of-one in MLB when it comes to the combination of pure overpowering stuff and the ability to mow down a lineup multiple times through the order.

As all great players do, Cole found a way to adapt to these new circumstances, and proved that he was a Cy Young frontrunner with or without foreign substances. But then, injury struck. Cole injured his left hamstring in his September 7th start against the Blue Jays, and had to leave the game after only 3.2 innings.

In his subsequent four regular season starts and Wild Card start, it was clear Cole was not the same pitcher. Cole’s effectiveness begins and ends with his four-seam fastball. After the injury, it retained its raw characteristics — velocity, spin rate, and rising life all remained constant. Where he faltered was in the command department. 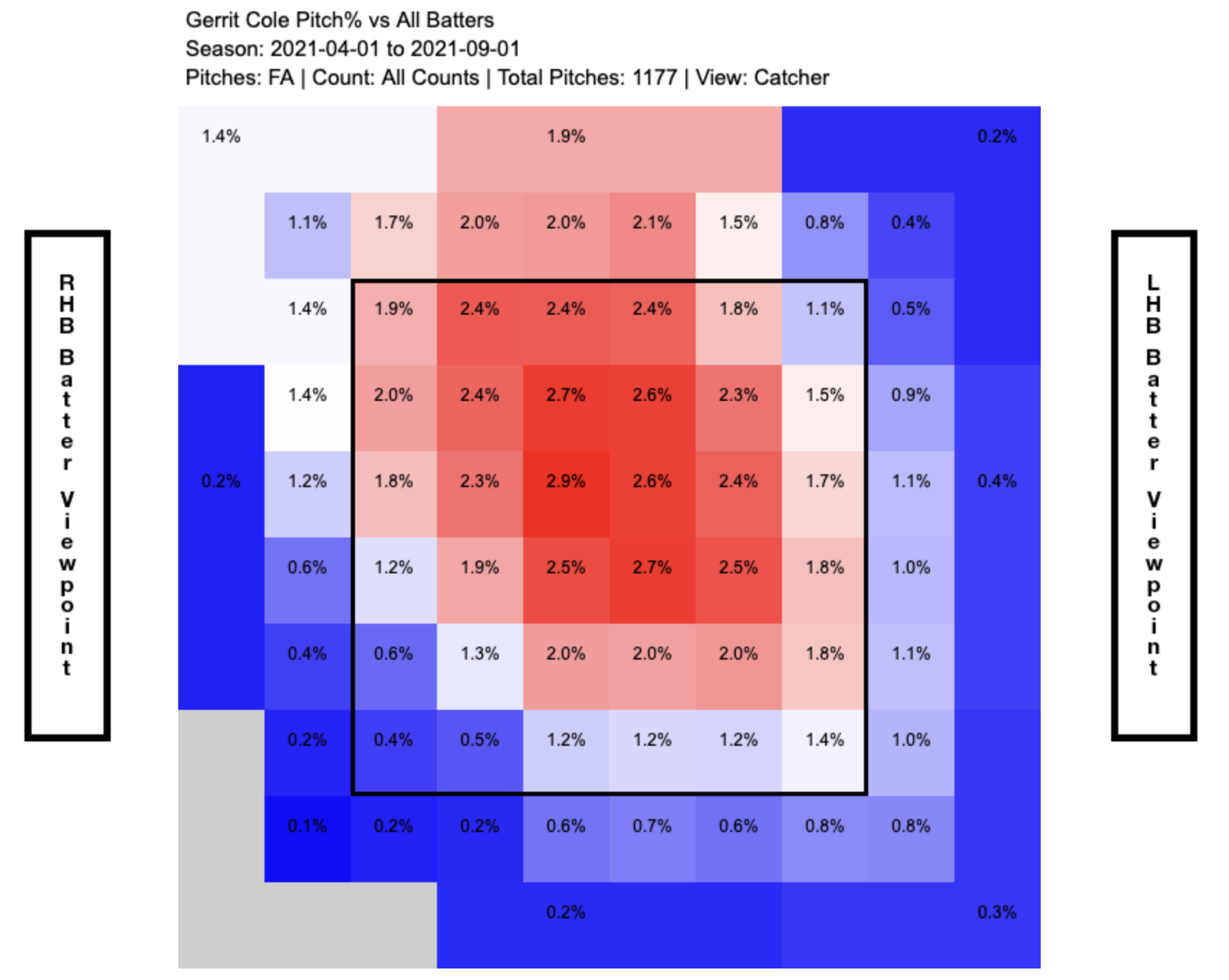 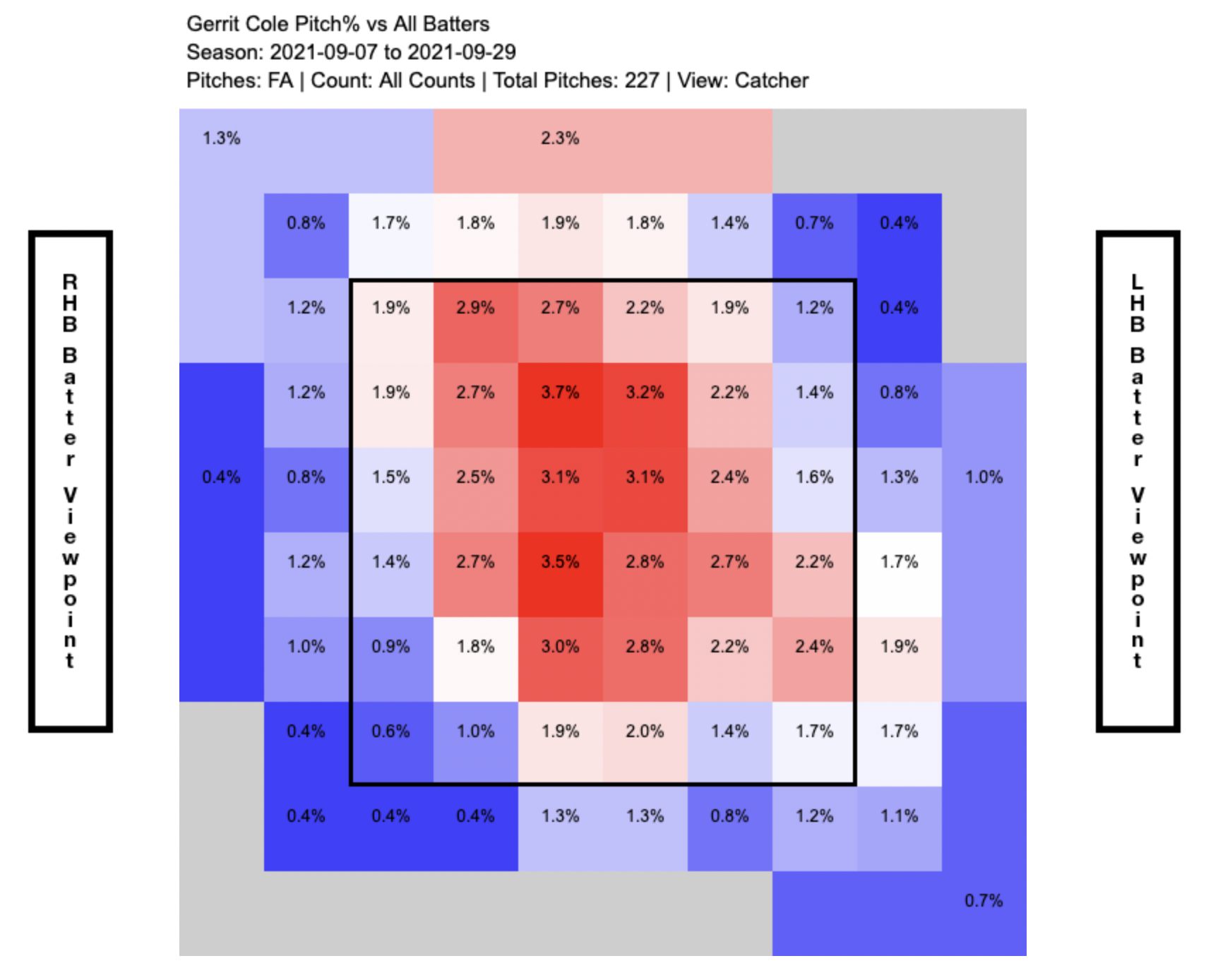 While the changes aren’t extreme, it’s important to note that we was locating fewer pitches at or right above the top of the zone, with many leaking middle to middle-down. This loss of command had catastrophic results. Before the hamstring injury, hitters only managed a .270 xwOBA against the four-seamer. After the injury, that figure shot up to .401. Instead of missing bats by pitching above hitters’ swing planes, Cole was throwing too many heaters into a batter’s happy zone.

Again though, Cole will probably still finish second in AL Cy Young voting. With a healthy hamstring, I have no doubt he will return to his dominant form next season. But solely in the context of this season, it’s hard not to ultimately feel a little disappointed with Cole’s performance. As I said, success in the regular season almost feels like the bare minimum. For $36 million a year, the Yankees were hoping they were buying a perennial ticket into the World Series, and instead they played one playoff game in 2021, thanks in large part to Gerrit Cole.

It’s unfair to reduce his entire season down to one failed postseason start, but such is the territory that comes with being the Yankees’ ace. It’s the tariff for demanding the ball with the season on the line, playing for a team that professes each season to be championship or bust. Maybe we need to reset our expectations now that the foreign substance ban is being enforced. Maybe the hamstring injury really did steal away any shot at being effective. Whatever the case, Cole needs to be better wire-to-wire next season.