Most of us know that spin rate plays a big role in why a pitch breaks vertically. A high spin rate fastball will drop less than a low spin rate fastball, giving it the “rise” that can drive batters to swing and miss at pitches over the plate — Gerrit Cole does this quite a lot.

What drives horizontal movement, especially on fastballs, is a little different. Because a fastball is thrown with backspin, spin rate alone doesn’t really affect lateral movement. It’s actually affected by delivery and release point, specifically how horizontal the pitching arm is at release. A pitcher with a three-quarters delivery, all else equal, will impart more horizontal movement on a pitch than a straight-over-the-top delivery.

All this leads to Darren O’Day, the newest Yankee and recipient of a one-year, $3.25 million contract to solidify the bullpen. O’Day shows three pitches, but really only gameplans with two: a four-seam and a slider. He throws those pitches like this:

Yes, watching it makes me feel queasy too.

Just the second real sidearmer on the Yankees in the past eight years, O’Day’s delivery actually serves as cover for what can be pretty unremarkable stuff (and he should play a bigger role than sidearming predecessor Cory Gearrin did in 2019). His four-seam is literally at the bottom of the velocity leaderboards, raw spin is pretty much the MLB median, and his active spin — or percent of spin that drives movement — is toward the bottom of the league as well. Yet he’s still able to strike out a third of the batters he sees, and he gets about 31 percent whiffs on a not great fastball.

The key is the delivery:

Because of that weird sidearm delivery, the ball is coming out of a much lower point vertically, and much farther out away from the pitching rubber, especially relative to other righthanders. Take Chad Green, probably the best right-handed reliever the Yankees have, as an example:

Green is a two-pitch pitcher too, but his pitches are coming out of a slot two and a half feet higher than O’Day’s, and about a foot closer in to the pitching rubber. The difference to the hitter must be night and day: 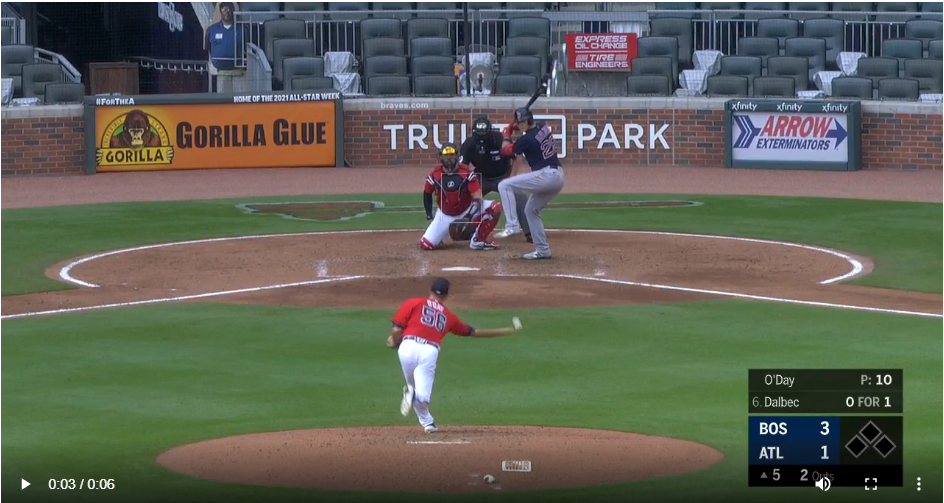 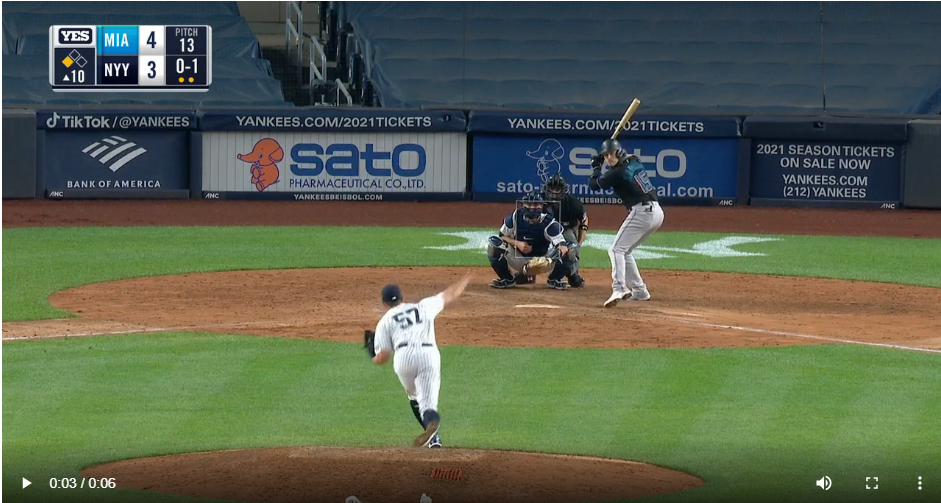 Green has a three-quarters delivery, which is going to allow him to impart some horizontal movement on the ball and hide it behind his head for most of his delivery. O’Day, meanwhile, is going to hide the ball so far out off the mound that a right-handed batter can’t really see the pitch until it’s on him, making up for a lot of that reduced velocity and ineffective spin.

And really, playing O’Day off the other righties in the ‘pen might be the key to unlocking his greatest value. In games where the Yankees need three or four relievers to get through nine innings, it would be a challenge for a hitter to face Green or Jonathan Loáisiga, and then be confronted by O’Day two innings later. Someone who looks completely different being thrown into the mix means that everyone gains just a little bit of an edge. Over the course of a 162-game season and however long the playoffs end up being, those little edges can add up quickly.