The Cubs are signaling a fire sale, so it’s time to be buying

It’s important to be able to learn from your own mistakes, but it’s perhaps even more important to take advantage of other people’s mistakes. The Ricketts family, for example, is making a mistake with the Chicago Cubs, signaling that they’re ready to blow up a competitive baseball team. In the last month, the club has non-tendered Kyle Schwarber, dealt ace Yu Darvish, and there are rumors abound that they also want to ship out Kris Bryant and Javier Báez.

If the Cubs are having a fire...sale, the piece that the Yankees should poach, above all else, should be starter Kyle Hendricks. One of the most underrated pitchers in baseball, Hendricks often gets overlooked because of his stuff, but both the process and results speak for themselves. He had as good a year as Gerrit Cole by ERA, was considerably better by FIP, and his control-the-zone style of pitching would have given him the lowest walk rate of anyone in pinstripes not named Erik Kratz.

At age 31, Hendricks is a year younger than Masahiro Tanaka and a year older than Cole. He’s under contract until the end of 2023, at a $13.9 million AAV hit. Since the start of 2018, he’s been a top 20 pitcher in baseball, a step below the true elite like Cole, Justin Verlander and Jacob deGrom, but the definition of a number two — the kind of pitcher who takes the ball in a playoff series after your ace, and pitches well enough to give you a stranglehold on the series. And he just might be available on the trade market.

Hendricks also offers a very different look than the Yankees have traditionally pursued. The planned starters for the club over the past few seasons have been fastball-heavy, with Gerrit Cole and Luis Severino ranking among the hardest throwers in the game, James Paxton as fast as they come from the left side, and even J.A. Happ heavily relying on fastballs to attack hitters.

Hendricks, meanwhile, is very much a throwback. His fastball and sinker average about 87 mph, and he throws his three primary pitches — the sinker, four-seam, and changeup — relatively evenly, with no one pitch thrown more than 34 percent of the time. The sinker is the closest to a “primary” pitch he offers, and may challenge Zack Britton for the best pitch of its type in baseball. A ridiculously low spin rate, somewhere in the high 1800s, means that the ball drops 26” on average, consistently an inch or more than league average.

Now, most pitchers have their primary pitch, and it guards against a potentially weaker secondary offering. Gerrit Cole throws his fastball so much, in so many counts, that hitters have to worry about starting their swings early to catch up with 97 up in the zone. That exposes them to a curveball down in the zone, so even though Cole’s curveball is far from the best in baseball, it’s hedged against by the threat of the fastball.

For Hendricks, that slow, looping sinker actually enhances his other pitches, because of the way they behave. His four-seam gains the most by far, being used as a put-away pitch more than his below-average velocity and mediocre spin would have you think: 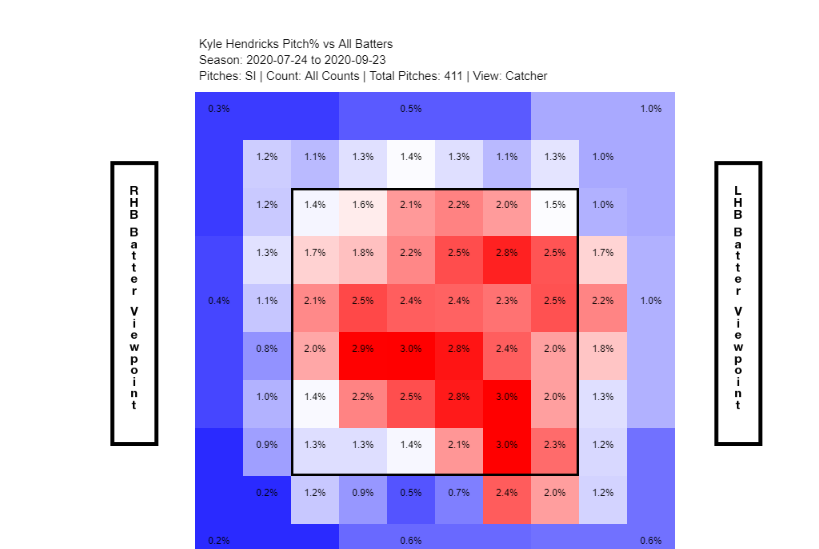 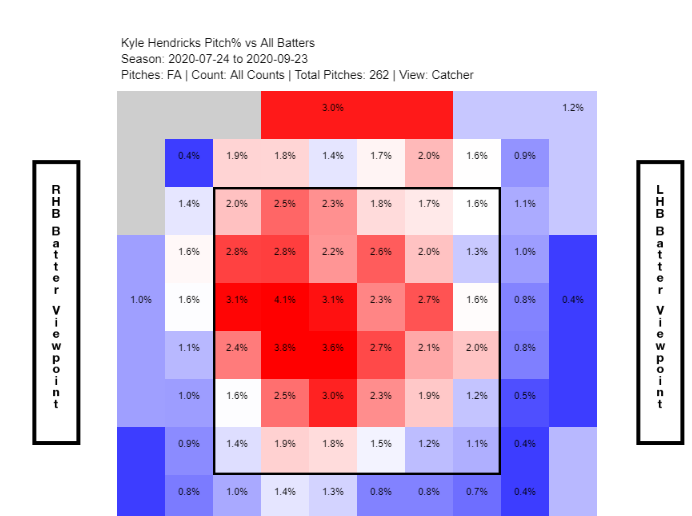 You can see the way Hendricks’ locates the four-seam compared to the sinker: he works higher in the zone, and much more in on righties. Now, without a pitch like the sinker, a mediocre fastball in on righties would get crushed. 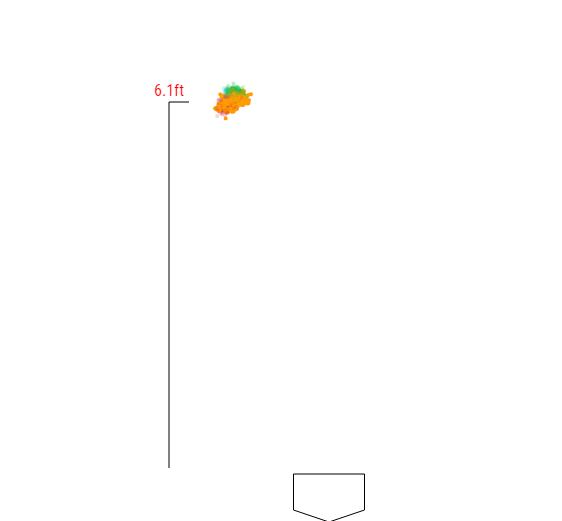 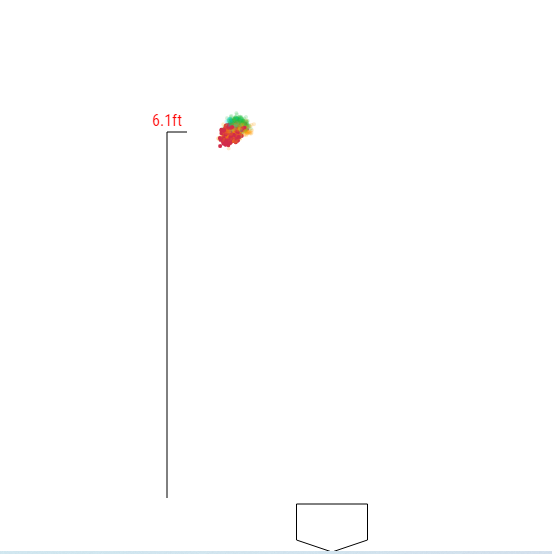 Instead, because the two pitches come out of identical release points — sinkers in yellow and four-seams in red above — and the same velocity, but moving in completely opposite directions, hitters are kept off balance. Hendricks then uses that pitch to put them away about a quarter of the time.

Kyle Hendricks is that platonic ideal of a “pitcher,” rather than a “thrower”. I always struggle with what that’s worth, because there’s no substitute for velocity. However, Hendricks isn’t a guy surviving on luck. He just doesn’t have a 97 mph fastball, and has built an incredibly successful career without it. I also wonder if he’s going to age better than guys that rely more on velocity — if you’ve never had a heater, you don’t have to learn how to pitch without it, à la CC Sabathia.

The downside to Hendricks is that he’s really good, young enough to still hold a lot of value, and depending on who gets involved in the bidding, the Yankees don’t have the farm system to compete with other teams. Hendricks’ contract also isn’t as overvalued as other guys, meaning it’s less likely that the Yankees can wave the Money Wand and take on more money in exchange for a lower prospect hit.

Still, if the Cubs are selling, Hendricks is the piece to buy. He’s better than the free agent pitchers on the market, and his AAV hit is lower too. Unlike a target like Joe Musgrove, we don’t have to hope or expect the Yankees to make many changes to the Professor. He’s already an upper-tier arm, and looks a heck of a lot better in Game Two of the ALDS than Deivi Happ.