Mike Tauchman has been jammed up for the Yankees

Share All sharing options for: Mike Tauchman has been jammed up for the Yankees

This season, Mike Tauchman certainly hasn’t been able to reproduce his 2019, even if his outfield defense is still as staunch as ever. Last week, Tom wrote about how Mike Tauchman might not be the player the Yankees hoped. As Tom noted, Tauchman’s hitting almost everything the other way, as he currently sports the fifth-highest oppo-rate in MLB.However, the problem isn’t that Tauchman is hitting the ball to left field, it’s the way that he’s doing it.

We’ve seen a number of right-handed Yankee hitters over the past couple seasons find success driving the ball to the opposite field, including Giancarlo Stanton, Aaron Judge, Luke Voit, and DJ LeMahieu. Batters from either side of the plate can generate solid contact to the opposite field, though Yankee Stadium happens to be particularly rewarding to those who can hit the ball in the air with force to right field. Here’s The Machine, the fourth-most prolific opposite field hitter in terms of the percentage of his overall batted balls, providing a tutorial in how to drive the ball the other way with force.

DJ’s rock solid mechanics allow him to fire this 105.9 mph laser to Anthony Santander out in right field. He allows himself to create separation between his upper and lower halves by first sinking into his legs. Then, he turns and clears the lower half early (by contact his hips are already pointing at the shortstop), and then rotates his upper body tightly all the way through the swing in order to be on-time to drive this high-and-inside fastball into right field. By matching the angle of his barrel exactly to the tilt of his upper body, LeMahieu allows for an efficient firing of the backside, sending the barrel directly back through the zone.

Tauchman too, has been quite good at flipping the low and outside pitch into left field for singles. Since the pitch’s location away from his body requires full extension just to make contact, Tauchman’s often able to catch the ball on-plane out in front of his body, and with enough force to clear the infield.

Tauchman does a good job staying through pitches down-and-away, as evidenced by both his spray chart and pitch location of all of this season’s hits. 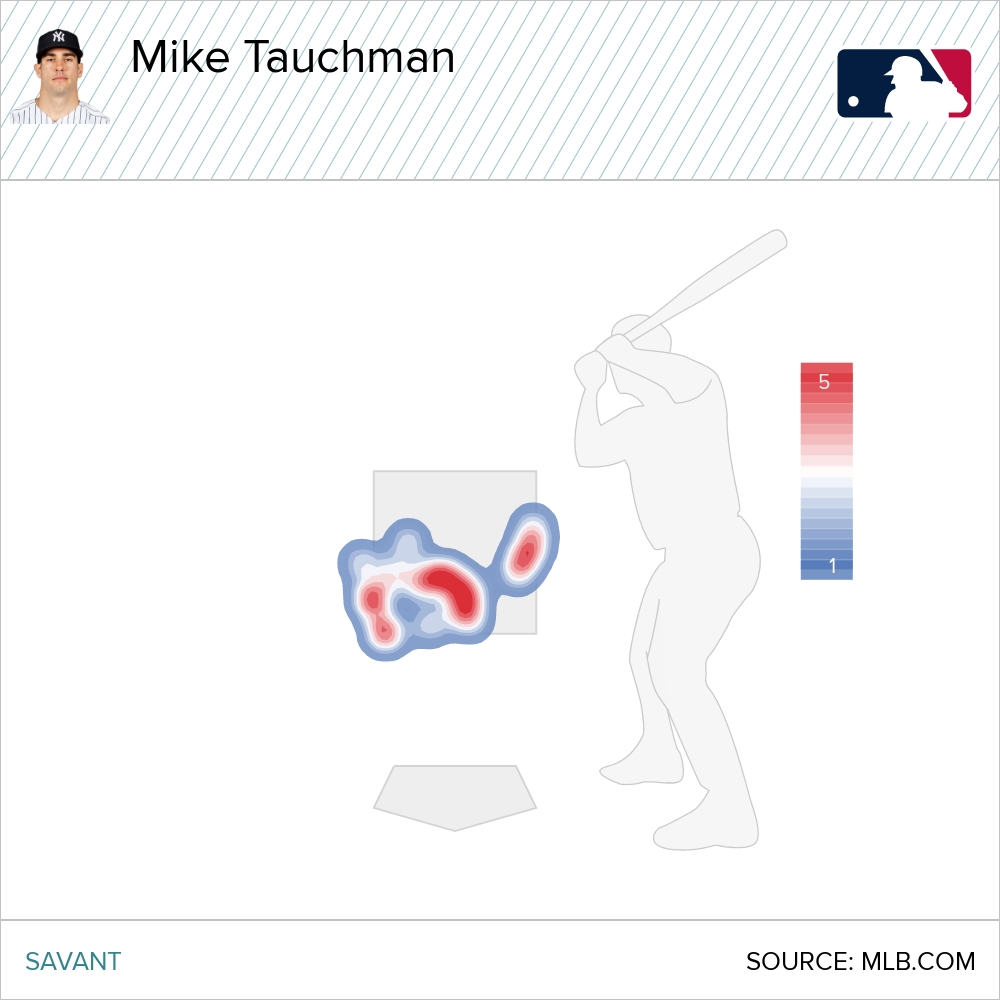 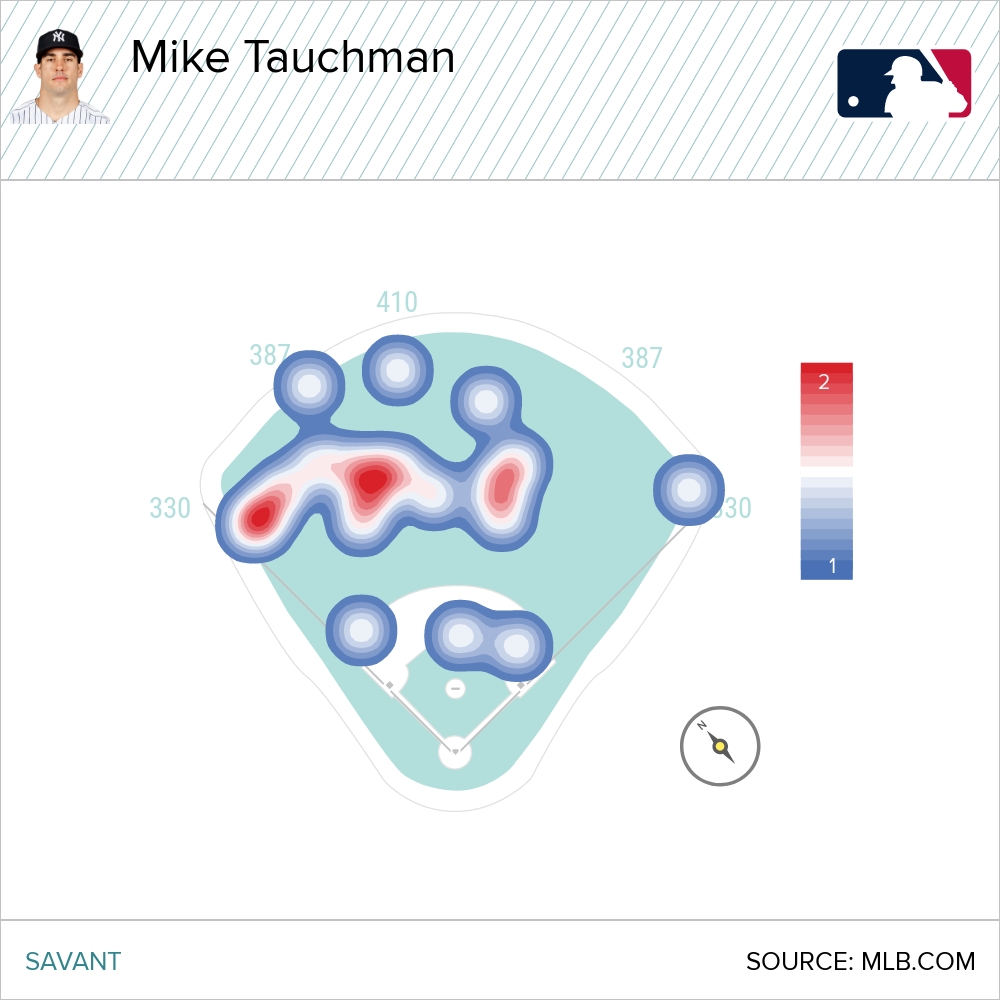 However, on pitches that limit Tauchman’s ability to achieve full extension, he’s struggled mightily. When swinging at strikes in the upper third of the zone, he has recorded exactly zero hits this season.

Along with balls fouled back into the screen, Tauchman’s hits soft fly outs to left field, or swings and misses entirely. He hasn’t squared up a single ball in the upper third of the zone. Without turning his hips early enough to create separation for his hands to travel straight through the zone, Tauchman ends up cutting his barrel across the baseball. This leads to a preponderance of opposite field contact, but of nowhere near the quality of the Yankees’ starting second baseman. Tauchman’s average exit velocity is down three mph from last season, and it’s this indirect path that’s at the root of his power problem.

Last season, Tauchman recorded an xSLG of .323 on these same pitches. Though it’s certainly nothing to write home about, it’s passable, especially when he obliterated pitches in the middle third (.650 xSLG), and held his own against pitches at the bottom of the zone (0.434 xSLG). For a side-by-side view of Mike Tauchman’s struggles this season compared to last, take a look at hitting coach Avery Ware’s excellent breakdown of the subtle change that’s broken Tauch’s tick:

It is easiest for Tauchman’s flat swing to match the plane of the ball as well as that of his shoulders on belt-high pitches. Technically reminiscent of Robinson Cano’s swing, with the proper separation and hand path, Tauchman can successfully drive mistakes like he did last year. This jammed up version of his swing won’t be able to recreate the out-of-nowhere performance he posted last season.