The one glaring concern for Gerrit Cole

Share All sharing options for: The one glaring concern for Gerrit Cole

Over the past few days, people have written ad nauseam about Gerrit Cole and his regression back down to Earth. I do not wish to beat a dead horse, but so far I have found all of the different explanations for Cole’s “struggles” wholly unsatisfying. Surely there must be something quantifiable that we can point to and say “Aha! Fix this and you’ll be right as rain!” Would that it were so simple.

Yesterday, Andrés called for cooler heads to prevail as it pertains to the start of Gerrit Cole’s Yankee career. He reminded us that it is far too soon to begin panicking over results and home run rates, and rightfully so, as Cole has been largely effective-to-dominant in most of his starts in pinstripes. However, we are all justified in feeling some level of worry that Cole has looked pedestrian at times and downright hittable at others.

The biggest cause for concern is the four-seamer. Batters are squaring up the offering with frightening consistency. The average exit velocity off the fastball is up 2.5 mph. Batting average, slugging, and wOBA against the four-seamer are all up at least 80 points. Barrel rates are 40% higher and hard hit rates are 28% higher. The whiff rate and put away rates against the four-seamer have each dropped by more than 12 percentage points. Most alarming, the pitch is practically neutered in the area it should be most effective: the top of the zone. 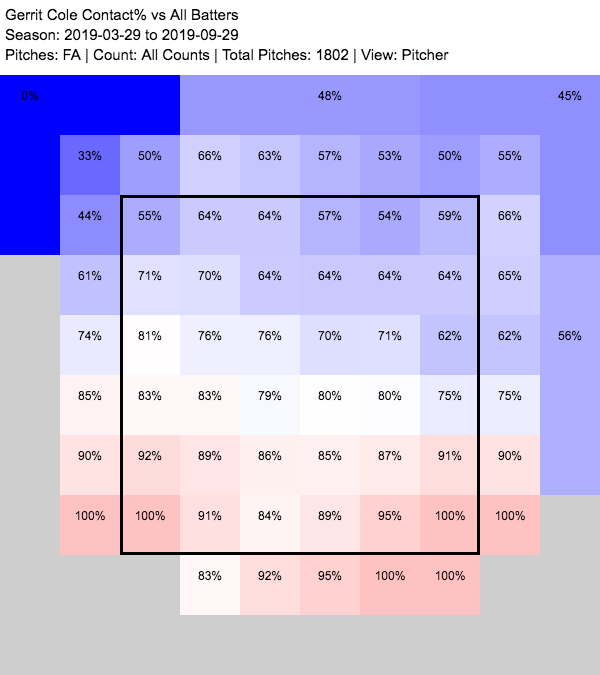 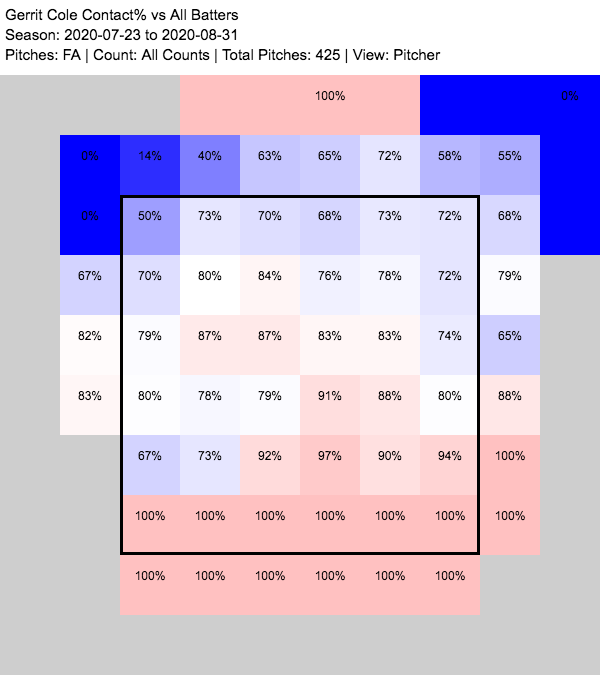 But how is it that hitters’ stats are up pretty much across the board against the four-seamer? Velocity? Nope. Cole’s fastball is within 0.6 mph of its average velocity last year. Spin rate? Wrong again. His four-seamer is within 30 RPM of last season. No, instead, I would venture that fastball movement, or lack thereof, is the culprit.

The first clip is a Cole fastball during his 15-strikeout ALDS performance last year. The second clip is his most recent outing. Brandon Lowe is the batter both times. You can clearly see that while the fastball stays on plane in 2019, causing Lowe to whiff underneath, this year his Cole’s fastball is dipping into the zone and onto his opponents’ bats. The numbers back up the eye test, as his four-seamer exhibits almost an inch less rise relative to last season.

The four-seamer is Cole’s bread and butter, the foundation upon which the effectiveness of every other pitch is built. Therefore, the lack of dominance with the fastball has a trickle-down effect. Simply put, opposing batters are not as scared of having the gas thrown past them. They no longer have to cheat quite as much if they have confidence in the ability to handle Cole’s fastball. Even a fraction more reaction time can have profound outcomes at the plate. Just those few milliseconds extra are the difference between swinging over the top of a breaking ball versus recognizing the pitch and taking it for a ball.

If his fastball is being thrown about as hard and with the same amount of spin as last year, why is its rising action still diminished? Well, we could look at its spin axis. A pitch’s spin axis determines the direction that it moves. For a four-seamer with perfect backspin (12:00 spin direction, 180 degree spin axis), the forces generated by the spin of the ball contribute to a perfectly vertical direction of movement.

It stands to reason then that the closer a pitcher’s spin axis approaches 180 degrees, the more rise that pitch will have. Taking this a step further, if Cole’s spin axis on his fastball is trending away from 180 degrees, this could provide a clue into its decreased vertical rise. Alas, this is not the case, as the average spin axis on a Cole four-seamer in 2020 is 215 degrees, functionally equivalent to the 217 degrees in 2019.

So we’ve established that the magnitude and direction of a pitch’s movement is determined by spin rate and spin axis. We’ve found that Cole is not achieving the same kind of rise and riding action on his fastball, that instead the movement profile mirrors that which you might expect to see from a less vertical spin direction (higher value spin axis). However, we’ve also discovered that neither the spin rate nor spin axis on Cole’s four-seamer has varied significantly between 2019 and 2020. So what in the heck has caused Cole’s fastball to lose the characteristics that made it so unhittable last season?

Enter spin efficiency. For the sake of this article, just think of spin efficiency as how true a baseball is spinning on a given axis. Or, to make it even simpler, say a fastball has a spin rate of 2500 RPM on a 3:00 axis (12:00 spin direction, or true backspin). Spin efficiency tells you how many of those rotations occurred on that axis, and thus were able to contribute to the movement of that pitch.

So there’s the smoking gun! This explains how a pitch that maintains similar spin rate and spin axis from one year to the next could still have such variance in movement outcomes. Perhaps Cole has thus far been unable to replicate the wrist orientation and finger manipulation he had in Houston needed to idealize the fastball’s spin to the desired axis. Unfortunately I do not have access to the high speed cameras needed to confirm these suspicions, so understand that the postulations I have made are simply one of many possible explanations for the trends we are seeing. Cole did lend some credence to these conjectures speaking to Andy Martino of SNY following his 10-K outing against the Rays:

I made a little tweak with my delivery, staying over my legs a little better. I thought that it kind of increased a little bit of the deception. It allowed me to get through the baseball at the end and really start to nail... the spin axis that is my spin axis. At times it’s been a little inconsistent, and today we were really repeating for the most part. The more vertical you can get [the fastball], the more carry it has through the glove as opposed to east and west... The more I stay over my legs, the more it frees the hand up to get through the pitch.

It’s OK as fans to be critical of even our best players, while at the same time standing behind them in support. The two are not mutually exclusive. There are few pitchers for whom the bar is set so high as it is for Cole. And already Cole has impressed, certainly with his ability, but perhaps more so with his comportment and accountability when representing the Yankees. I have no doubt the Cole has put in countless hours dissecting the areas of improvement and working on a solution, and will be back to the dominant form we expect sooner rather than later.