Will the real Ben Zobrist please stand up?

Share All sharing options for: Yankees infielder DJ LeMahieu should be the American League’s Most Valuable Player

Back in 2014, when WAR was still for nerds, the baseball literati made a strong push for Ben Zobrist as one of baseball’s most underrated superstars. In a piece from The Hardball Times, Neil Weinberg argued Zobrist’s case as one of the league’s best in full. Despite his relatively low counting stats for an MVP-caliber player, Zobrist’s sky-high walk-rate and excellent defense all over the diamond made him one of the most valuable baseball players during his peak.

From 2009 to 2014, Zobrist was the fifth-most valuable player according to fWAR, and ranked third in fWAR. Even when the baseball world at-large came around on Benny boy, traditional catch-all advanced metrics left out the exact quality which Zobrist was best known for, and which, according to Weinberg, caused his improperly low perceived valuation—his positional flexibility. While evaluators might thumb their nose at a nominal utility-man, in Zobrist’s case, it was an additional boon to his value. He provided elite offense and defense at a number of positions, unlike the run of the mill “U,” allowing his manager (usually Joe Maddon) increased flexibility with which to operate.

Though there’s a case to be made that DJ LeMahieu’s 2020 offensive counting stats keep him a step behind the upper-crest of the American League’s best hitters, his hard-to-quantify Zobristian contribution to this Yankees squad makes him the League’s Most Valuable Player, in the literal interpretation of the award.

Before addressing the je ne sais quoi that makes LeMahieu special, it’s certainly worth noting that he has been the cornerstone of a particularly lopsided Yankee lineup that’s been the best offense in the American League by a wide margin. The Yankees 50.2 offensive runs above average is third in the majors, and first in the AL, outpacing the second-place Angels by nearly 18 runs. Despite constant injuries (again) and a shaky back-end of the rotation (again), DJ LeMahieu has been the most consistent source of production at the top of the Yankee order, followed by Luke Voit. His second consecutive phenomenal season in pinstripes will cement his name as the latest high-average hitting Yankee slugger, particularly beloved by the Yankee faithful, following the likes of Paul O’Neill, Dave Winfield, Derek Jeter, and Don Mattingly among so many others.

In 2020, LeMahieu stands among the league leaders in nearly every offensive category. In order to appease the old-fashioned voters, LeMahieu’s .359 batting average leads the American League. For the younger crowd, LeMahieu offered up a season as the second ranked hitter in both wOBA and wRC+.

Only Nelson Cruz and Jose Abreu even have a case as better hitters in 2020 in terms of wRC+ or wOBA, but one’s not a good defender at a limited position (Abreu), and the other isn’t a defender at all (Cruz). Alternatively, LeMahieu is a two-time Gold Glover, and has been more than serviceable at the keystone and the hot corner all season.

This season, according to OAA, DJ’s been a net neutral. However, his pedigree should count for something here considering the small sample size. LeMahieu won Gold Gloves as a second baseman in 2014, 2017, and 2018 all with the Rockies. In 2018, his 13 outs above average, the second most in the majors among second basemen, backed up his reputation, earning him the gilded leather awarded to the NL’s best fielder at the position. In 2017 too, the first year of OAA, LeMahieu finished first among NL second basemen with nine outs above average.

LeMahieu has been asked to so much more on defense for the Yankees, spreading his total value thinner over three positions. Though his sprint speed has fallen a tad over the past few years, potentially limiting his range, his glove remains as true as nearly any infielder in the majors. He’s got stellar footwork and hands at second base, consistently making all of the routine plays. The only slight hole in his defense is down the line at third base. He doesn’t have the arm-strength of someone like Nolan Arenado or Matt Chapman to hang with the game’s best third basemen, but he’s plenty good enough to do a patch job when the Yankees need him. 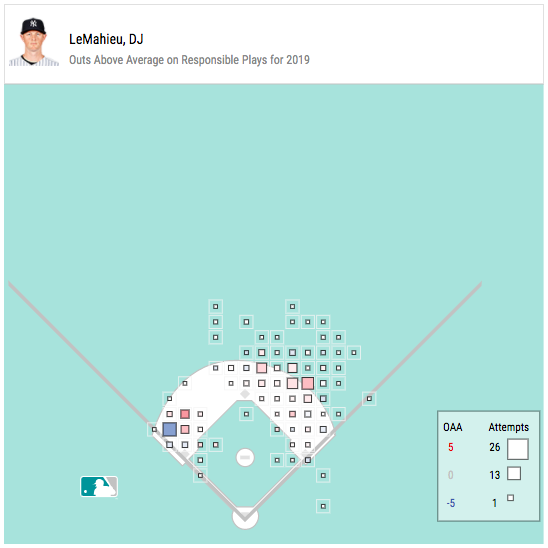 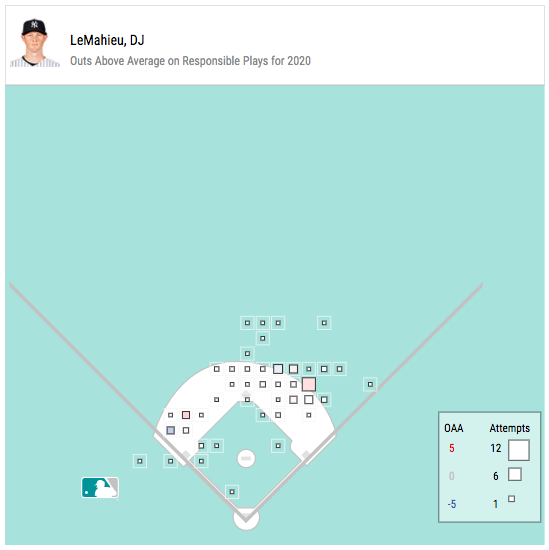 Also worth noting is that although DJ is only ranked 16th in fWAR, that number suffers slightly due to the positional ding he gets from the innings he’s played at first and his sub-stellar arm strength at third. In 2020, DJ’s played just 72% of all of his innings at his natural position, second base. If the Yankees were to have started DJ at second base every game, they might maximize his personal value, but they’d be limiting his contextual value to the 2020 Yankees.

In that way, LeMahieu is actually underrated, like the infield-only version of the former (Devil) Ray-A-Royal-Cub analytics darling, Ben Zobrist. With all of the injuries the club’s suffered this season, DJ has been able to fill in at third for Gio Urshela (17 missed games) and at first for Voit (4). With an injury-ridden roster stripped down to its bare bones, the Yankees were forced to start nine different infielders over the course of the season. The ability to select the best four on any given day has been essential to maintaining the team’s success especially considering the slim pickings amongst the fickle bats of Tyler Wade, Thairo Estrada, Mike Ford, and the defensive sieve that is Miguel Andújar. Further, LeMahieu's ability to spot-start at two additional infield spots allows the roster flexibility of carrying your best overall players without worrying too much about explicitly carrying a backup at every position.

Though this boon isn’t quite quantifiable, it certainly makes LeMahieu more valuable to the Yankees than his traditional or advanced stats might suggest. He’s already amongst the American League’s elite few in that regard, and when you incorporate the the ways LeMahieu helps on the margins, he emerges as the league's best.