DJ LeMahieu and the Yankees are a perfect match

The veteran infielder has experienced a massive career boost since putting on the pinstripes, and it’s no coincidence that he’s thriving in the Bronx.

Share All sharing options for: DJ LeMahieu and the Yankees are a perfect match

Last season, DJ LeMahieu outperformed even his most optimistic projections. Despite maintaining his line-drive opposite field approach he honed as a member of the Rockies, he’s been able to increase his power output even after leaving the dinger-friendly confines of Coors Field. This year, he’s been just as good, if not better.

During his seven years with the Rockies, LeMahieu posted a combined .760 OPS; below league average for a second baseman. Despite recording a stellar .299 batting average and .352 on-base over that stretch, his inability to hit for any power whatsoever (.408 slugging and 49 total homers) limited his total output.

However, it wasn’t for his lack of strength — before 2018, he’d already hit two homers over 450 feet, something that only a small percentage of the best hitters in the entire world are capable of doing. For comparison, through his MVP season in 2018, Christian Yelich had only ever hit a single 450-foot dinger, despite having exactly twice as many career homers. Over the course of his career, DJ has hit more balls 99 mph than at any other speed.

If anything, LeMahieu’s differential between his maximum power and his median results shows that his approach is at the plate is the antithesis to an Adam Dunn/Joey Gallo type; DJ’s optimized for consistency over power.

LeMahieu’s problem was that even when he absolutely smoked the baseball, it was straight into the ground. Though LeMahieu himself claims to have not changed his approach, which his relatively stable (and low) launch angle marks back-up, it seems as though he’s just grown more comfortable driving the ball in the air while continuing to hit the crap out of the baseball. Even back in 2016, as was the case again in 2019, he was among the top 8% in average exit velocity mostly due to his consistency rather than his top-end.

Despite Coors Field’s homer-friendly reputation, batters only hit 1.108 times the number of homers that they would at the average ballpark, 11th in the majors. In Yankee Stadium, that number climbs to 1.643, the third highest mark in the majors. Although LeMahieu occasionally goes nuclear with an absolute bomb, more often than not his homers are of the wall-scraping variety. In 2020, LeMahieu’s average home run distance is the third-lowest in the entire Major Leagues.

At 360-feet per dinger, that’s almost 40 feet shorter than the league average. He also had the fourth greatest jump from his expected homer total to his actual home run total with 9.4 more, which factors in how many ballparks his actual homers would have left the park at. This season, he’s already hit ten bombs and would be on-pace for over 30 if he were to record 600-plus at-bats like he did last year. However, LeMahieu’s hit 4.1 more homers than his expected mark, the most in the majors. 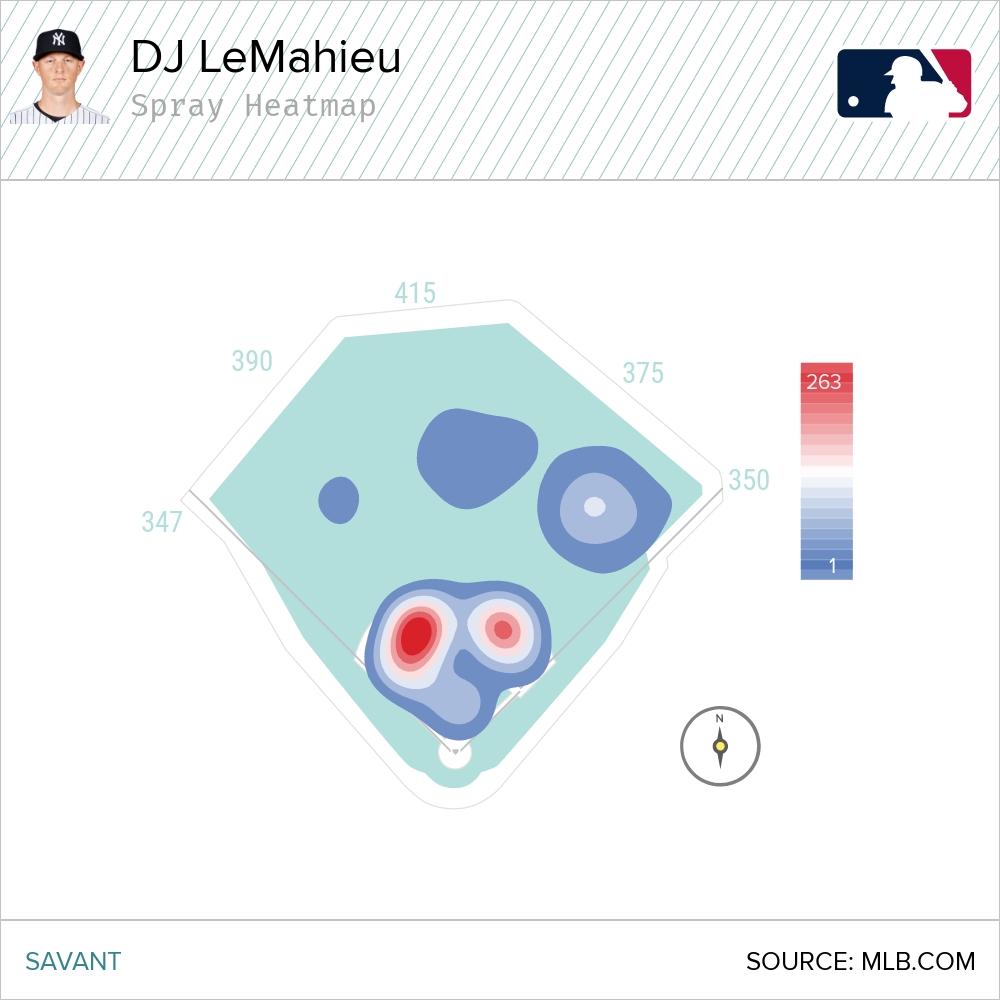 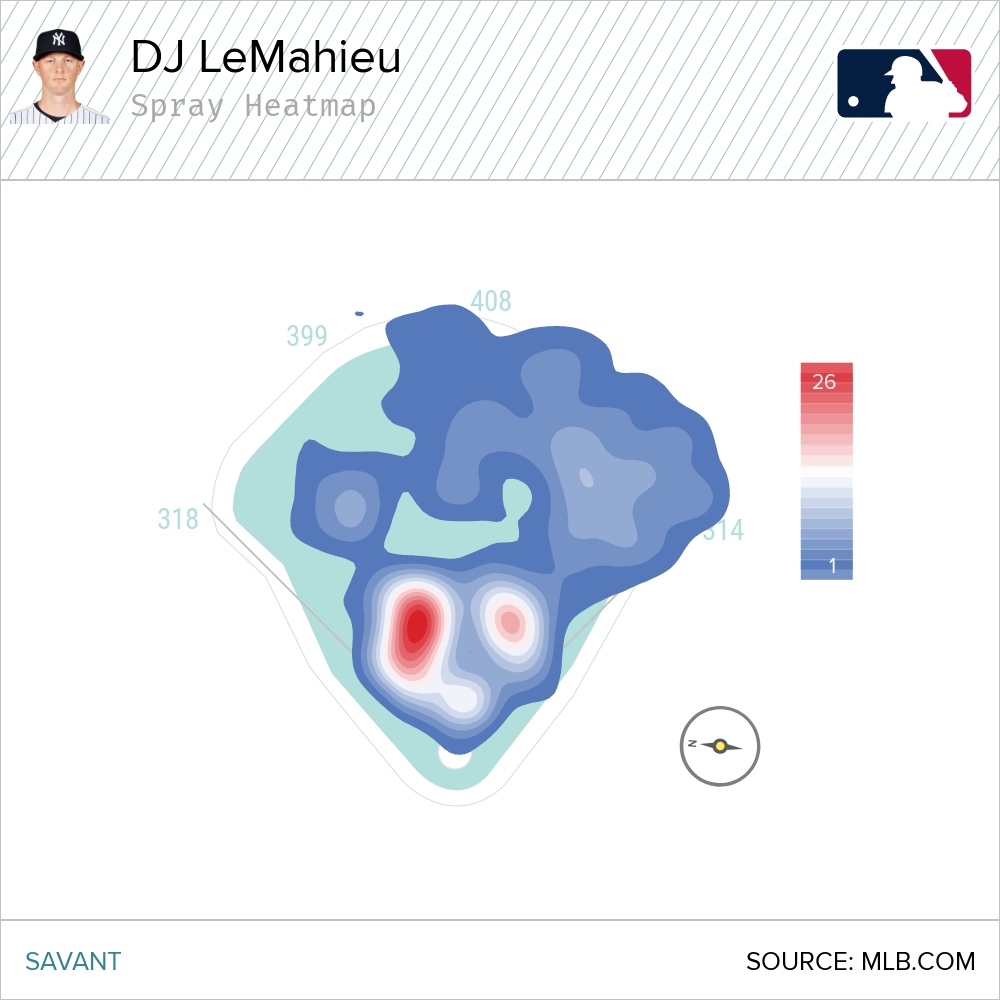 The above image on the left, is LeMahieu’s far more numerous batted ball results as a member of the Rockies, whereas the image on the right is the batted ball results from his two years on the Yanks. Though he’s hit the ball similarly in navy pinstripes as he did in purple pinstripes, the same balls play differently at Coors compared to the Bronx.

DJ’s ability to take advantage of the Yankees’s short right field porch grants him more homers than he’d otherwise hit in any other ballpark. Over the past two years, 27 of LeMahieu’s 36 homers have come within the comfy confines of the Yankees’ home field in the Bronx. Of those 27, two-thirds went to right field, or one-half of DJ’s 36 total home runs. As a point of comparison, over the past two seasons on the road, DJ has only hit three home runs to the opposite field.

“The House That Ruth Built,” has become “The House that DJ Abused.”

Andrew Clem estimates that the right-centerfield fence in Yankee Stadium is no further than 360 feet, with straight-away right field coming in at just over 330 feet. At a 30-degree launch angle, LeMahieu simply has to clear a 92 mph exit velocity to hit a ball over the Stadium’s right field — something he does more often than not as evidenced earlier.

Although LeMahieu might be able to hit his very hardest baseballs to left or center, he has plenty of power to still drive the ball the other way in excess of 92 mph, and with greater consistency than if he were to try to pull. At Yankee Stadium, balls at this speed and in the air are often homers, while they might be merely doubles or fly-outs at 29 other parks.

As confirmed by analysis at The Ringer and FiveThirtyEight, MLB changed the composition of the baseballs it was using, and unintentionally juiced league-wide home run totals during the 2017 season. According to their studies, a less dense, bouncier rubber core added about 0.6 mph, or three feet on average, to every fly ball. Then, in 2019, the MLB admitted to using balls with slightly lower seams and therefore less air resistance, creating greater distance for fly balls, and the largest single season total home run tally in the history of the game. It seems relevant to mention as a contributing factor, that LeMahieu’s exponential home run growth occurred at the same time as the rest of the league’s.

With a juiced ball and an even smaller home field, DJ’s deep right field fly-outs at Coors have turned into dozens of home runs at Yankee Stadium. LeMahieu’s statistical transformation as a Yankee has less to do with changing what he does, but a whole lot more to do with where and when he’s done the very same stuff.