The Yankees’ slugger was one of the best high fastball hitters in the league. Now they’ve become his enemy

Share All sharing options for: The Yankees can unlock Gary Sánchez’s bat with this one change

There is perhaps no more mercurial a member of the current Yankees team than Gary Sánchez. No other Yankee, including Giancarlo Stanton, divides opinion more among the fan base than does El Gary. His supporters rightfully point to his otherworldly offensive exploits from the catcher position. His detractors lament his plate discipline and defense. It’s true that Sánchez is a very streaky hitter who has a propensity to chase breaking balls out of the zone with two strikes, but let’s take a moment to see the forest for the trees.

When he’s on, the Kraken is a behemoth in the batter’s box. Not just for a catcher, but for any player in the league. Since entering the league in 2016, Sánchez is eighth in ISO (.270) and 16th in average exit velocity (91.1 MPH) among qualified hitters. Unfortunately, a lot of the positives on his resume were quickly forgotten with the rocky start to his 2020 campaign. Through his first nine games, Sánchez had yet to register a home run while striking out north of 50% of the time. Eek!

As my fellow writer Andrés showed last Tuesday, Sánchez does appear to be turning the corner on his season, having strung together a handful of strong offensive outings over the last week. A statistic in which he typically leads the league, Sánchez posted a barrel percentage of only 5% in his first 14 appearances, a mark he improved to 25% over the seven games since.

However, if he wants to make the transition from a batter currently treading water in the box back to being a fearsome presence at the plate, there is one major hurdle he still needs to clear: hitting the fastball up and over the plate. Sánchez has traditionally been a great fastball hitter, slugging .576 lifetime against the heater with more than half his career home runs coming off the gas. The 2020 season, so far, represents a departure from that trend. 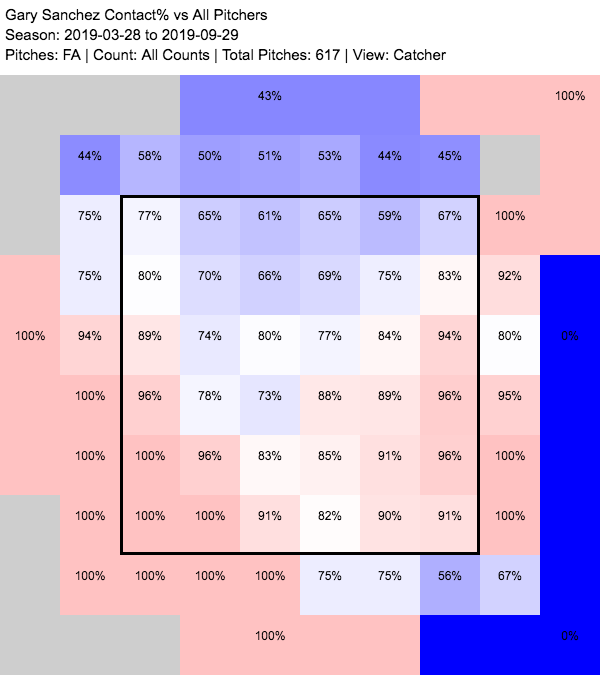 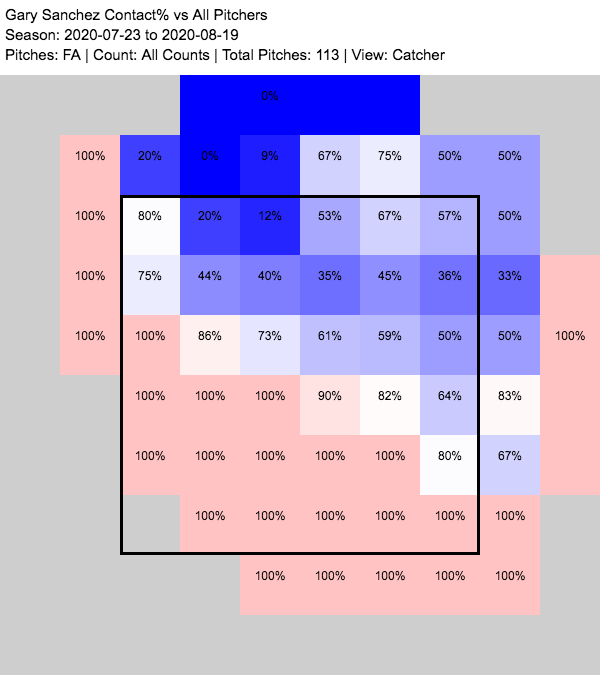 The image on the left shows Gary’s contact rate against fastballs last year, and on the right are the results from this year. The contrast is quite stark, Sánchez is clearly making less contact on heaters up and over the plate, and his production at the plate has accordingly suffered.

What are the root causes of Sánchez’s struggles with hitting the fastball in the zone? I would suggest that the majority of his problems stem from timing, with the rest owing to some mechanical imperfections.

I owe a lot of thanks to my colleague Cooper for helping me identify certain cues in Sánchez’s swing that inform about his timing and mechanics. There are three things in particular I want you to pay attention to in the following clips. First, and most importantly, Gary has been late on his swings against fastballs more often than not.

Here is a side-by-side freeze-frame I captured of the moment Gary is beginning the weight transfer to his plant leg. 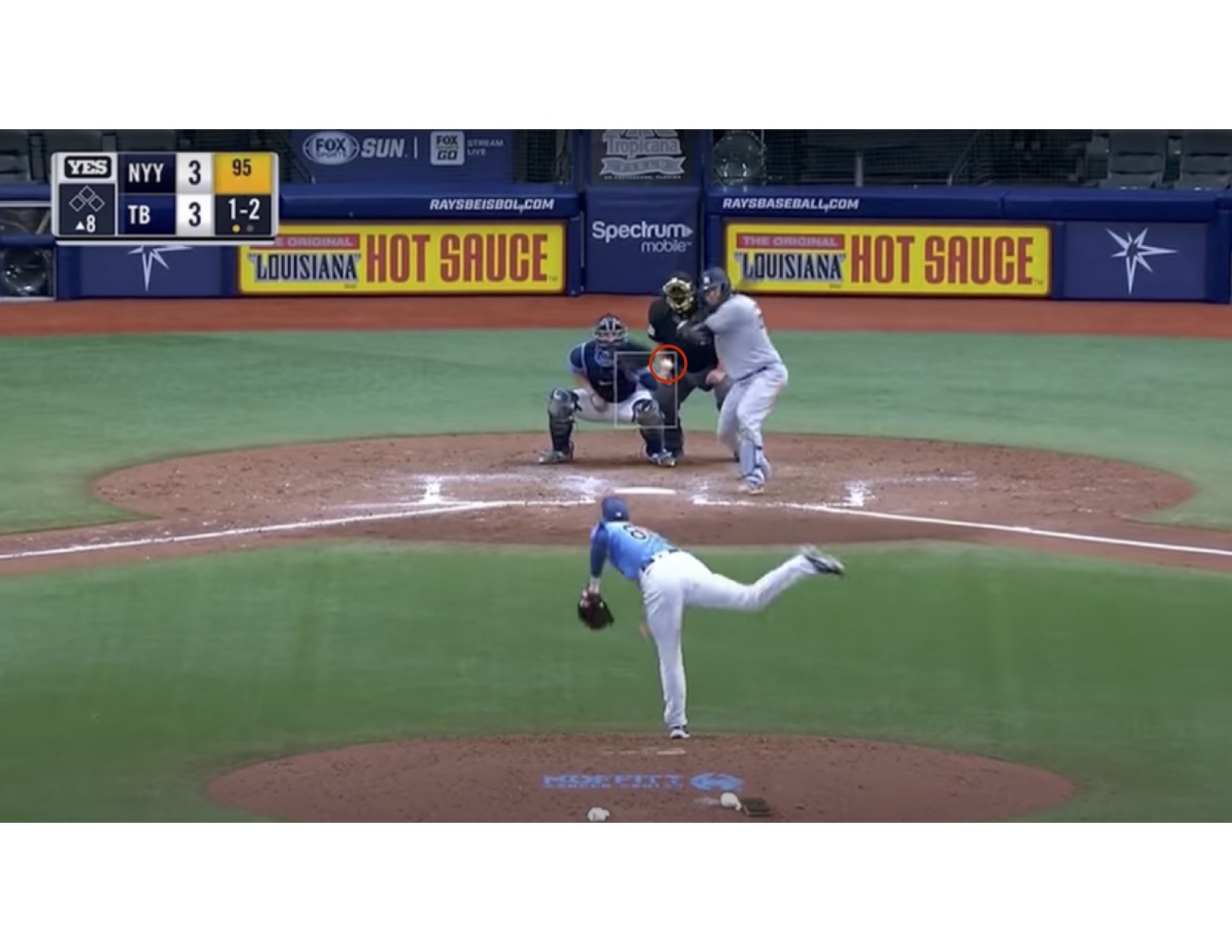 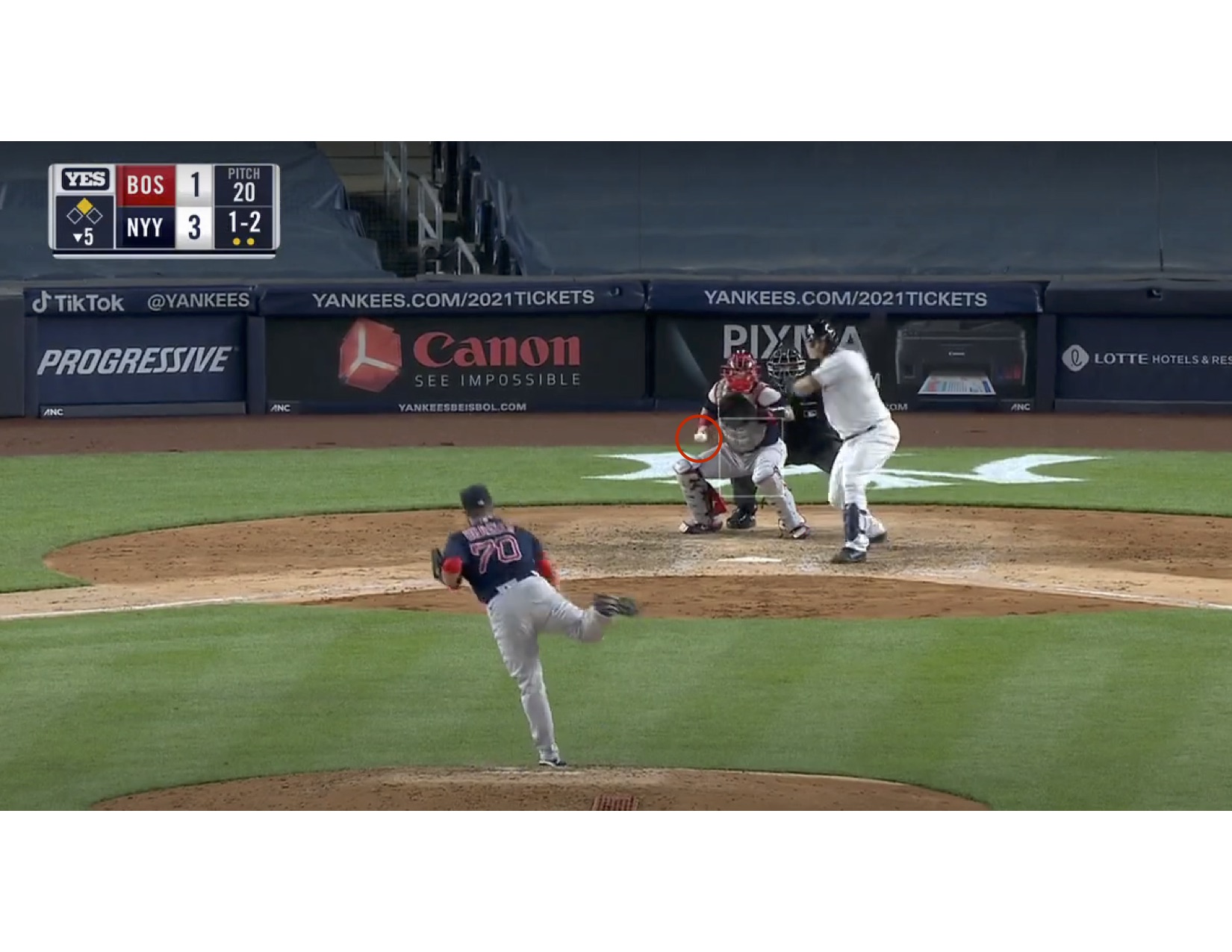 Although it’s a little difficult to tell in the still shots, you may notice that in the left image, taken from the first clip, Sánchez is late in fully planting his left foot following the leg kick. The baseball is already over the plate by the time he initiates the upper body rotation, and the fastball gets blown right by him.

Conversely, in the right-hand image, Gary has fully planted the lead leg and is already uncoiling his swing when the ball is roughly a yard from the plate. This allows him to get the barrel to the ball in the hitting zone, and the result is an absolute bomb.

The second cue to pay attention to is Sánchez’s head movement. In the first clip, his head violently jerks back and to his left, which makes tracking a 95 mph fastball all the more difficult. In the second clip, his head remains horizontally stable, as if glued in a static position.

Finally, you’ll notice how Sánchez’s front hip flies open in the first clip. In the second clip, Sánchez is able to stay much more square through the ball. By not selling out to pull, the barrel of Sánchez’s bat stays on plane through the hitting zone for much longer, such that he is still able to pull the 95 mph Ryan Brasier fastball without explicitly trying to do so.

With many of the Yankees’ best hitters on the IL, the team needs the remaining sluggers to step up and carry that weight until the likes of Stanton, Judge, LeMahieu, and Torres return. Luke Voit has exceeded expectations, now it’s time for Gary Sánchez to do so as well. When he’s hot, Sánchez is perhaps the scariest hitter in the Yankees lineup, and if he continues on his upward trajectory especially slugging against the fastball, he’ll be well on his way to reclaiming that title.