A quieter, simpler approach is just what Red Thunder needs

Share All sharing options for: Clint Frazier’s new swing could lead to his breakout with the Yankees

There may be no harder position group to crack in MLB than the Yankees’ outfield. Right off the bat, you’re not winning the right field-spot if everyone is healthy, because a healthy Aaron Judge is one of the five or so best players in baseball. In center, you have to compete with Aaron Hicks, who the Yankees believe in so much they gave him the second-longest contract on the roster, and Mike Tauchman, who blossomed as one of the #NextMenUp in 2019.

That leaves left field, split between Tauchman again, and a longtime Yankee in Brett Gardner. Add in Miguel Andujar taking reps in the outfield and the possibility of Giancarlo Stanton playing there as well, and it’s hard to see how anyone else could get real playing time.

For Clint Frazier in 2020, that’s exactly the goal.

This is one of Frazier’s last chances to make a statement in the big leagues after parts of three inconsistent seasons. This is his last year of minor league options, and he really needs to stand out in the crowded Yankees’ outfield. Even if one of the starters goes down, Frazier isn’t necessarily the first guy into the breech - unless he can hit well, and consistently, enough to force the Yankees’ hand.

To that end, we have a home run from the team’s exhibition game against the Mets over the weekend:

Hitting a home run is always a good thing, doubly so when you’re fighting to impress the brass. As we so often talk about in baseball though, the most important thing for Frazier isn’t the result - it’s the process.

His swing on that homer, and indeed through spring training and summer camp, is noticeably different. Let’s look at his swing from last year, and to be fair, on a home run against the Angels:

So what’s new? Frazier abandoned that high leg kick, moving to a much more subtle step forward with the front foot. The step is a timing mechanism - many hitters have moved to the big leg kick in order to better load their back leg and begin the transfer of weight between back to front leg that’s the start of every swing. Gleyber Torres and Justin Turner are two easy examples of players that have done this, but it’s not a completely new idea - Alex Rodriguez’s swing features this kind of high leg kick too.

The difference in kick vs. step is the amount of movement. In all things, the more moving parts you have, the more can go wrong. Think about Dellin Betances’ pitching motion - there’s a lot going on, and we saw instances where small mechanical kinks could really throw off his delivery. In machining, this is why a revolver is more reliable than a blowback pistol, which is more reliable than a gas system. The more mechanically complicated a process is, the more small things can go wrong.

Now look at Frazier’s set position at the decision point - this is where he has to decide whether to swing at these pitches or not: 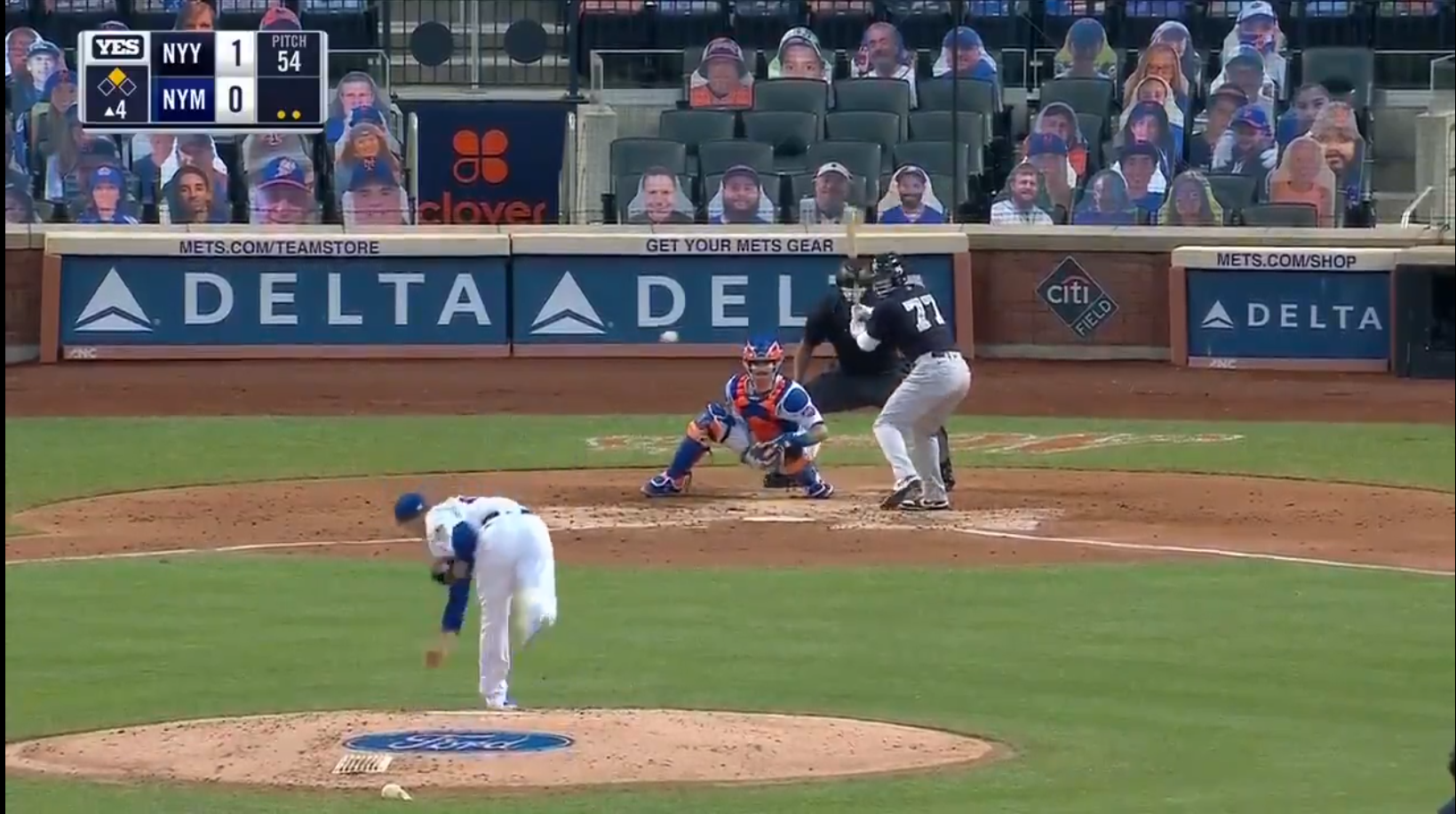 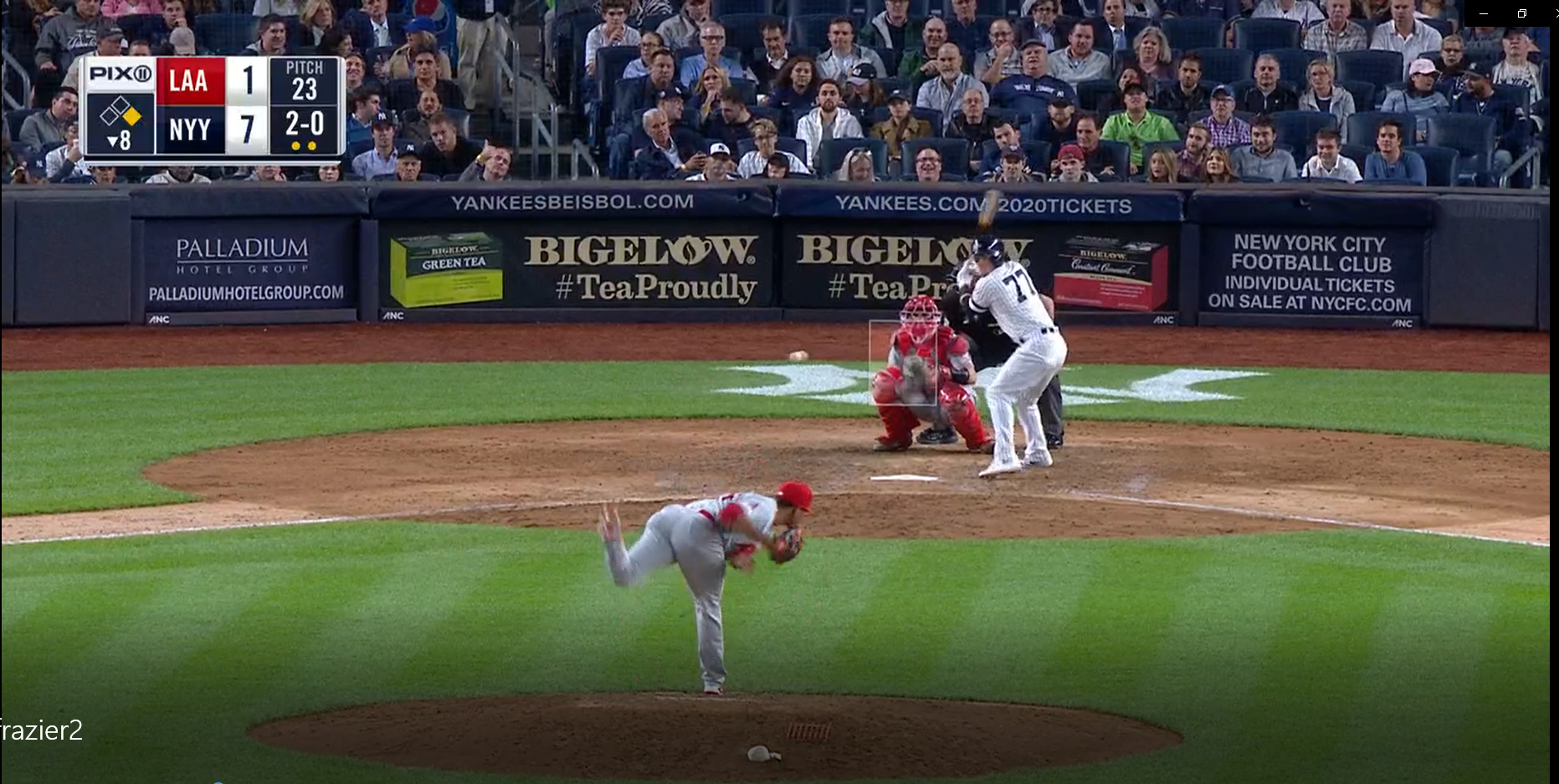 There are two things to draw your attention to at this critical juncture. First, Frazier’s in the exact same physical position in both pictures. He’s gotten to the same place with less motion against the Mets. The advantages here are twofold - less movement overall again means there’s less in his swing that can be thrown out of whack.

It also means that Frazier can wait on the ball longer. This has always been something in Frazier’s potential. “Legendary bat speed” should mean that you can wait on the ball, and compensate with a faster swing. Getting yourself into a set position faster only enhances that advantage - Frazier now has more time to read the pitch, and make a better decision.

The second thing to notice at that decision point, is where his hands are. I’ll point them out for you in separate screenshots:

Against the Mets on Saturday, his hands are a lot lower, down by the letters of the jersey. Against LA, in 2019, they’re all the way above his shoulders. Quoting now from the excellent The MVP Machine, page 89, by Ben Lindbergh and Travis Sawchik:

[Betts’] hands dropped lower toward his belt. As he moved forward, his hands stayed back and “under” the ball, as Latta teaches...pitches travel at downward angles...a flat bat path is on plane with a pitch for a very short amount of time. An upward path increases the odds of optimum contact

This passage discusses the changes Mookie Betts made ahead of his 2018 AL MVP season, with the help of private hitting coaches like Doug Latta and Craig Hyatt. It directly challenges the idea that the best kind of contact is a low line drive. The best kind of contact is a hard fly ball, and the best chances of you being able to do that over and over and over is to have a swing plane where your bat is moving upward, rather than on a straight horizontal. Moving your hands lower makes that easier - instead of having to move the bat parabolically, down then up, you only have to move it in one direction.

Again, the idea of keeping your bat on an upward plane to meet the ball isn’t a new concept - Ted Williams wrote about it fifty years ago. The ability to teach, to break down a swing into each individual component, optimize each step, and put it all together, however, is new, and it looks like Frazier is embracing it.

He deserves credit for that, by the way. Frazier is a guy dripping with natural talent ever since he was drafted out of high school. It can be hard for players like that to listen and to follow the advice that coaches and data provide, simply because the player has done something a certain way for so long, and experienced real success with it.

For Frazier, he needs consistency in his swing. The process of breaking down and rebuilding a swing is complicated, but simplicity is at its core. Frazier is simplifying the steps he goes through to make contact with the ball, and that simplification should help him make better contact, and more contact overall.

That’s been what’s held Frazier back as a hitter in MLB. He doesn’t make enough contact when he decides to swing, and a large part of that is because his swing has been so complicated, so full of moving parts. His high leg kick made him susceptible to lags in timing, where he’s too early or too late on the ball. His hands having to move so much more sapped power and reduced the chance he would hit the ball even if his timing was right. Simplifying his swing should help him make more contact, and let that natural talent shine through.

Breaking into the Yankees’ outfield might be the toughest assignment in baseball. There’s no guarantee that Frazier will do that full-time, or that these swing changes will stick when he has to play every single day. He’s made the right change right now, though, and has probably given himself his best shot yet at being an everyday Yankee.