The hitters who are Yankee killers, and how to get them out

These sluggers have been thorns in the Yankees’ side in recent years, but there are ways to attack them at the plate

Share All sharing options for: The hitters who are Yankee killers, and how to get them out

There are certain names that stick in the minds of Yankees fans, eliciting a slight wince at every mention. David Ortiz and Evan Longoria are the first two in recent years to come to mind. These Yankee killers, it seemed, would always deliver the dagger to the heart in close games, and their bats could otherwise not be kept silent whenever they were in town.

Since the advent of Statcast, there is a plethora of information to dissect players’ performances. This allows the average fan to pick out the most minute details to help understand why a player is soaring or slumping. With this wealth of data at my fingertips, I feel (somewhat) equipped to determine what makes a player successful and what their weaknesses might be.

The following five players are evaluated by their wRC+ against the Yankees over the past three seasons. There are varying metrics to rank how well a player does against the Yankees, but I feel that wRC+ gives a good picture of a batter’s production at the plate, while following an easy-to-understand distribution that makes it immediately clear how much better that player was versus the Yankees than the rest of the league.

I also decided to set the plate appearances to a minimum of 50 to obtain an at least marginally acceptable sample size, as someone who has 10 plate appearances against the Yankees in three years cannot be called a Yankee killer no matter how inflated his numbers are.

I will admit that I was a bit surprised to find Ramirez’s name at the top of the list, as I was instead expecting someone like a Manny Machado or Mike Trout. However, Trout has too few plate appearances to qualify for this evaluation, and Machado has too many, such that his numbers began to regress to the mean. Regardless, Ramirez has been a spectacular hitter for most of the last three seasons, and always shows up to play against the Yankees.

Since 2017, Ramirez owns a .375/.432/.819 slash line with eight home runs against the Yankees. I wondered how he had such an inflated slugging percentage, until I remember his two-homer game at Progressive Field last season, which included a first inning grand slam against Chad Green.

While these numbers against the Yankees may appear daunting, some cracks in the armor did appear at the beginning of last season. In the first half of 2019, Ramirez was batting only .218/.308/.344 with five home runs and a 75 OPS+. He righted the ship in the second half and impressively finished above league average in both OPS+ and wRC+. However there were definitely some underlying factors in his first half slump that could clue Yankees pitchers into how to limit his damage.

In the first half, Ramirez was chasing more pitches out of the zone than at any point since 2017, and was making the least amount of contact on those swings. This trend, along with a steep decline in performance against fastballs and changeups, contributed to his lowest hard-hit percentage and highest soft-hit percentage during that span. For a man normally renowned for his eye at the plate, Ramirez displayed some ill-discipline during his first half woes. 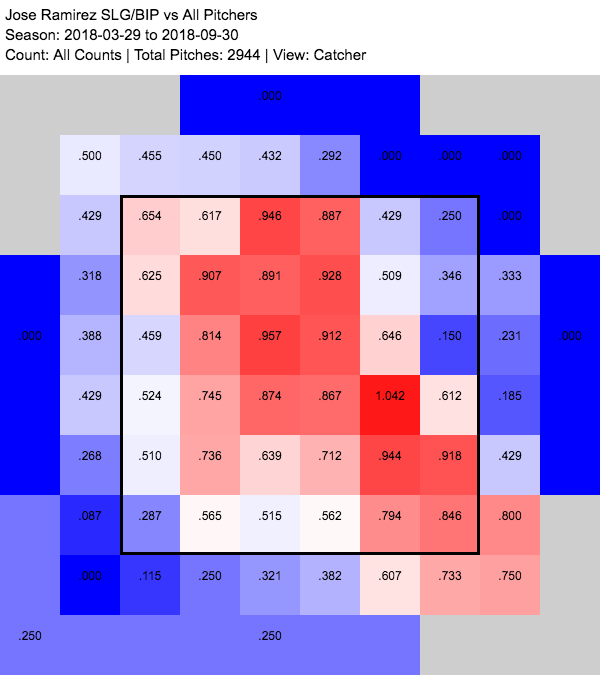 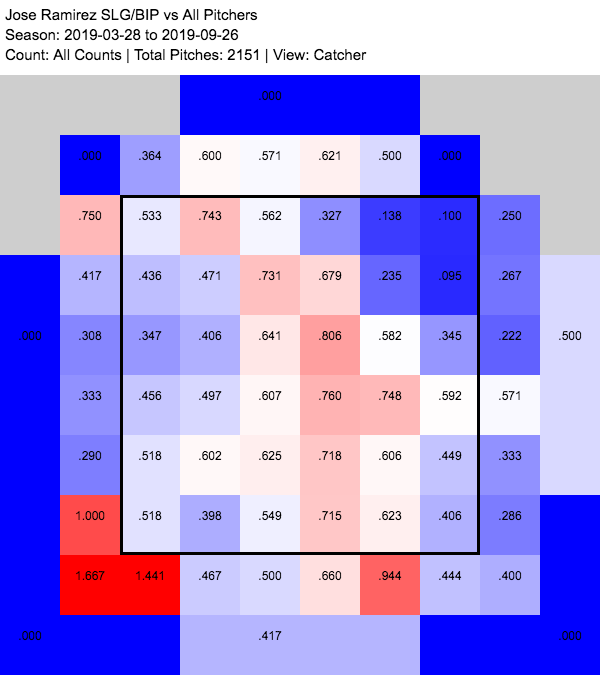 For Yankees pitchers, this means mixing in the offspeed early and often and living on the edges of the zone early in the count, so that they can surprise him with a fastball later in the count, inducing weak contact against a pitch he used to crush.

Even though he missed all of last season to Tommy John surgery, Perez nonetheless qualifies as a Yankee killer. The fact that he hits .300/.352/.700 with six home runs and 13 runs bated in against the Bombers is made all the more impressive by his Gold Glove-caliber defense behind the plate.

Salvy does have several weaknesses that Yankees pitchers are well equipped to exploit. First, Perez performs much worse against the breaking ball than the heat or offspeed, with higher whiff at chase rates, and a lower hard-hit percentage. This suits a recent trend that has emerged among the Yankees staff, as evidenced by increased breaking-ball usage by James Paxton and Zack Britton.

Perez also has a high first pitch swing rate at 67.1% in 2018, accompanied by a relatively low contact rate out of the zone. An approach that can take advantage of this observation is to throw a first-pitch ball hoping to induce a swing-and-miss.

In a turn of events that absolutely nobody could have predicted, Hanser Alberto has been the fourth-best hitter in baseball against the Yankees by wRC+ since 2017. The vast majority of these appearances came last season, during which he battered the Yankees’ pitching staff to the tune of a .390/.422/.627 line and 177 OPS+. Basically, he turns into Tony Gwynn when he faces the Bombers.

This is not to say that Alberto comes without flaws. He is the epitome of a free-swinging contact hitter, as indicated by his measly 2.9% walk rate, 9.1% strikeout rate, and negligible discrepancy between batting average and on-base percentage. Also of note, Alberto ranks in the bottom one percent in MLB in both exit velocity and hard hit percentage. Talk about the antithesis of the modern batting revolution.

This results in a pretty straightforward translation for how to pitch to this guy. Don’t throw the ball in the zone. He swings over half the time and at two-thirds of the first pitches he sees. Let him get himself out rolling over the top of a Masahiro Tanaka splitter, or popping up a high Gerrit Cole heater. Just do not let him get any sort of purchase on a pitch anywhere near the zone, otherwise it will find a hole.

The best quadrant to attack him out of the zone is down and in, and if you are going to leave a ball in the zone, it better be up and in, or what I like to call the Big Papi Achilles Heel. However, it is best not to try to sneak a fastball in that area, because if you miss he actually does more damage on balls that are too high and tight than against strikes up and in.

As a final note, Carlos Correa (180 wRC+ vs Yankees) and J.D. Martinez (166 wRC+ vs Yankees) absolutely deserve to make this list, but to be completely honest, I have no idea how to get them out. I suppose take away the sign-stealing apparatus in Correa’s case and hope Martinez continues to regress back down to Earth as he did from 2018 to 2019.