When Giancarlo Stanton was acquired by the Yankees in December of 2017, the reigning NL MVP was viewed by many fans as the final stone in the Yankees’ Infinity Gauntlet, the crown jewel of an offense that was supposed to destroy opposing pitching with such malice it prompted Stanton to famously remark, “I feel sorry for the baseballs.” Unfortunately, the actual results have been uneven, at best.

After limping through 2018 with a hamstring injury, missing nearly all of 2019 with various ailments, and likely sitting out the first few games of 2020 with a right calf strain, the first and last question about Giancarlo Stanton is health. He was brought in to be a cornerstone alongside Aaron Judge in both the outfield and the lineup. Entering his third season in the Bronx, many fans are wondering if Stanton will ever return to the form that bagged him 59 home runs in 2017.

It’s tough to derive too much meaning from Stanton’s 2019 numbers. He was productive in limited time and still hit the ball hard — sporting an average 92.3 mph exit velocity — but succumbed to a right quadriceps strain in the postseason, another worrying lower body injury.

Even when hurt in 2018, Stanton displayed serious power over the course of a full season. He generated an average exit velocity of 93.7 mph, good for fourth in the majors and harder than marquee mashers that year like Christian Yelich and J.D. Martinez.

But in 2018, he was only able to generate that exit velocity with pitches up in his comfort zone. Balls down and away troubled him in particular, and when he did make contact they traveled with a lot less authority than they did in his 2017 MVP campaign. 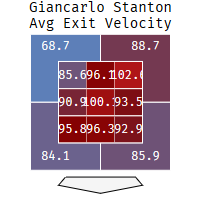 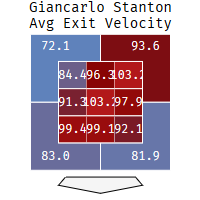 It’s reasonable to assume the hamstring woes he played through in 2018, which he later admitted affected his performance that year, eroded his ability to make good contact on low and away pitches — or contact, period. 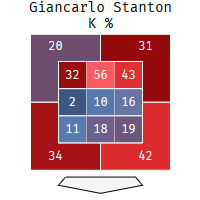 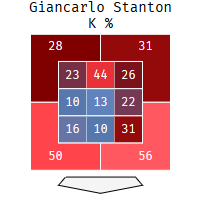 Hopefully, Stanton’s current leg injury doesn’t presage the same struggles this season. Keeping his body healthy, starting with the lower half, and reestablishing his ability to handle low pitches will be major goals for Stanton in 2020. His early returns in that area could be a bellwether for his year as a whole. If he stays strong enough to punish some of those pitches, the Yankees might see a resurgence in his output.

Whether he achieves those goals could depend on how often Aaron Boone pencils him into the designated hitter role. Mike Tauchman and Brett Gardner seem like starting outfielders at this point, while Judge’s season debut is TBD.

With a motivated Clint Frazier, a so-far-so-good Miguel Andujar, and an always versatile Tyler Wade available to fill the third slot, the outfield still appears to have enough depth to give Stanton plenty of at-bats at DH. Of his 560 projected plate appearances in 2020, Depth Chart predicts 371 will come at the DH spot, with the rest apportioned to starts as a left fielder.

That heightened production, plus the looming specter of another injury-riddled year, make a strong case for his role as the Yankees’ regular DH in 2020. Not only will fewer days in the field reduce the strain on his body, but they could boost his bat, too.

Despite the calendar having just flipped to March, the pressure is mounting on Stanton. Yet if anyone is capable of shouldering the burden of expectations, it might actually be Stanton, a guy with proven MVP talent and, you know, gigantic shoulders. If the big man can use his time at DH to keep his legs fresh, and if he starts connecting with more pitches low and away, Giancarlo Stanton might be in for a renaissance in 2020.