How the Yankees can get creative with J.A. Happ

Recent injuries to Yankees starting pitchers have made J.A. Happ an indispensable member of the rotation

Share All sharing options for: How the Yankees can get creative with J.A. Happ

A month into the new year, Brian Cashman named J.A. Happ as the team’s fifth starter. In a few short weeks, Happ has abruptly vaulted to the third spot in the rotation. A man who was once on the fringes of the starting five is suddenly an integral part of the Yankees’ plans.

J.A. Happ’s contract contains a $17 million option for 2021 if he reaches either 27 starts or 165 innings pitched this season. To many, that seemed a steep price for a 38 year-old borderline fifth starter/long relief arm. At the beginning of the offseason, it appeared the Yankees would explore all avenues to prevent that option from vesting, with some reports indicating New York was actively shopping Happ amidst their courtship of Gerrit Cole.

There was a chance Happ could have paired with an opener to limit his games started, or perhaps even be used as a swing man to depress his innings total. Aside from running afoul of the Players Association for intentional vesting option manipulation, the extended absences of Paxton and Severino have rendered these considerations moot. With the team seemingly locked on course to let Happ’s option vest, here is how they can maximize his performance for this season and next.

The first clue for Happ lies with teammate James Paxton. Paxton’s renewed approach on the mound is well documented. Beginning in an August 2nd game against the Red Sox, Paxton committed to upping his knucklecurve usage while decreasing his fastball usage. The results were immediate, with Paxton going 10-0 down the stretch and each of his pitches gaining effectiveness. In numerous interviews, Paxton attributed his success to the curveball’s ability to change speeds and the batter’s eye level.

Less talked about during this span of improvement was the other tweak Paxton made. Earlier this month, Tom noted how Paxton focused on locating pitches in the lower half of the strike zone to accompany the increased curveball usage. This made all three of his pitches more effective, as they all exited his hand on the same plane and thus were more difficult to distinguish from each other.

The second clue was revealed to me in the Yankees-Nationals spring training YES broadcast. David Cone spoke about Matt Blake’s ability to design pitches that tailor to individual pitchers’ strengths, citing Trevor Bauer’s 2018 All-Star campaign. A major factor in Bauer’s success, according to Cone, was the input Matt Blake gave on retooling his curveball into an even more lethal pitch.

Cone praised Blake’s ability to take data and word it in a digestible manner. And it appears his philosophy has already taken hold, with Chad Green sporting a newly shaped breaking ball with far more vertical tilt than in years past. Perhaps Blake’s ease of making ideas actionable will work for Happ.

The confluence of Paxton’s and Blake’s successes creates a perfect storm for Happ. Paxton provides the template for a reinvented approach on the mound, and Blake provides the mechanical tools and technical know-how to put it in place.

Happ already figured out half the puzzle in September last season. Happ began throwing his four-seamer down and away to right-handed batters, and saw immediate results on his sinker. Even though his sinker usage dropped, it performed the best in September, as hitters had a harder time distinguishing four-seamer from sinker. 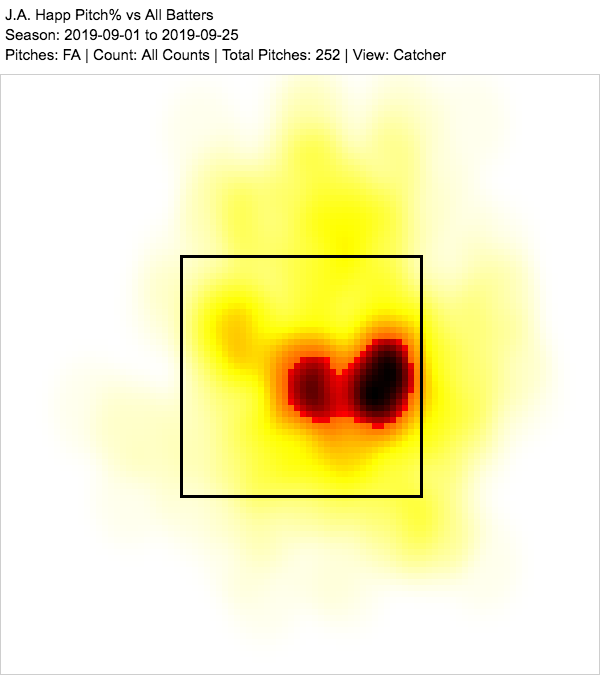 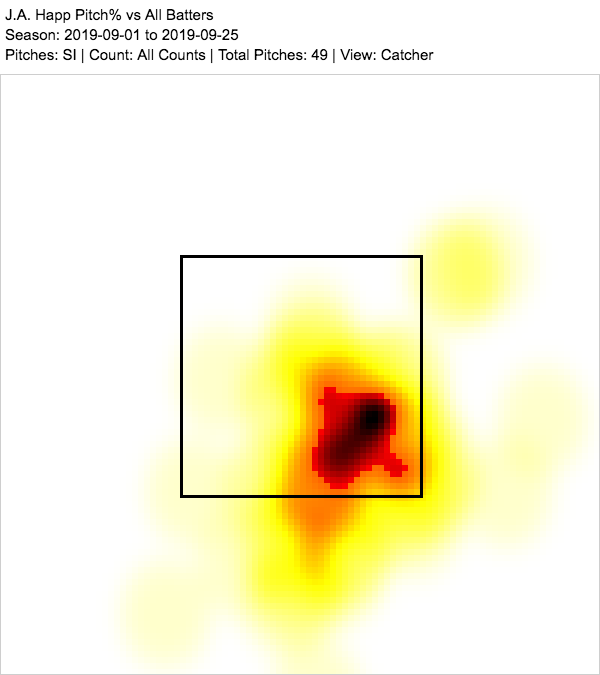 Happ was able to achieve the same tunneling effect with his four-seamer/sinker combo as Paxton was with his four-seamer/cutter/knucklecurve combo, and all this is down to fastball location. If Happ can reintegrate the curveball into his repertoire, I am confident he will reap similar rewards off such a decision as James Paxton did.

Like Paxton’s cutter, there is not much separation between Happ’s fastball and his offspeed and breaking pitches. Similarly, both Happ and Paxton sport below average slider/cutter offerings, in terms of horizontal and vertical break. The key then, is separation in velocity between fastball and curveball.

Both Happ and Paxton throw curveballs with an average velocity 14 miles per hour less than the fastball. Yet, curiously, Happ’s curveball usage gradually dropped from 12% to less than 1% from 2014 to 2019. With Blake’s help, Happ can regain confidence enough in his curveball that it has a similar effect to Paxton’s.

Putting it all together, it seems the road to success for J.A. Happ has two lanes. The first step is the relocation of his fastball to the lower quadrants of the zone, something that fueled his September renaissance. The second is the incorporation of the curveball to keep hitters off balance from a velocity standpoint.

Early returns from spring training are promising. Happ has gotten several swing-and-misses on down-and-away sinkers to righties, and thrown several curveballs for strikes. The Yankees need Happ to carry this momentum into the regular season. Their success leans heavily on his ability to be a steady presence in the middle of the Yankees’ starting rotation.