The veteran lefthander had a strong finish to 2019, let’s look at how sustainable it was.

Share All sharing options for: Was J.A. Happ’s September real?

If there’s a reason for keeping J.A. Happ on the Yankees, it’s that you’re hoping he recaptures the spark that led him to a really strong September in 2019. After a terrible season, Happ was able to end the year on a high note, with a 1.65 ERA, 3.10 FIP and the second-highest K-BB% of any month. The question is whether that September surge was luck, talent, or both.

Usually, K-BB% is just about the best thing to look at to see if a pitcher’s performance is real. Maximizing strikeouts while minimizing walks is pretty much the key to good pitching in this era, and it’s then comforting that Happ did exactly that in September.

Crucially, it seems that a big part of the trick was Happ leaning on his four-seam fastball - going from around 45% of all pitches to 56% in September - and cutting down on his sinker, which saw the biggest dropoff in usage. Curiously, the pitch itself was actually getting better over the year, and the sudden drop in sinkers may have made the pitch better still:

xwOBA on the sinker is declining pretty steadily from July on, meaning hitters are making worse and worse contact on the pitch. In September, when the sinker was used just 10% of the time, it was a truly elite pitch based on xwOBA. I don’t know whether this is because it was genuinely keeping hitters off balance or they were just unprepared for it since it was used so infrequently, but this seems to be a good example of the “Betances Quirk”.

The Betances Quirk comes from Dellin Betances’ shyness around his fastball: he throws it so hard with so much movement, so why does he rely on his breaking ball so much? In Dellin’s mind, throwing the fastball less frequently makes it more impactful; it looks like Happ is doing that with the sinker too.

The other thing that changed with Happ in September was his location. He’s a Ray Searage throwback, working up and in especially to righthanders with those fastballs. 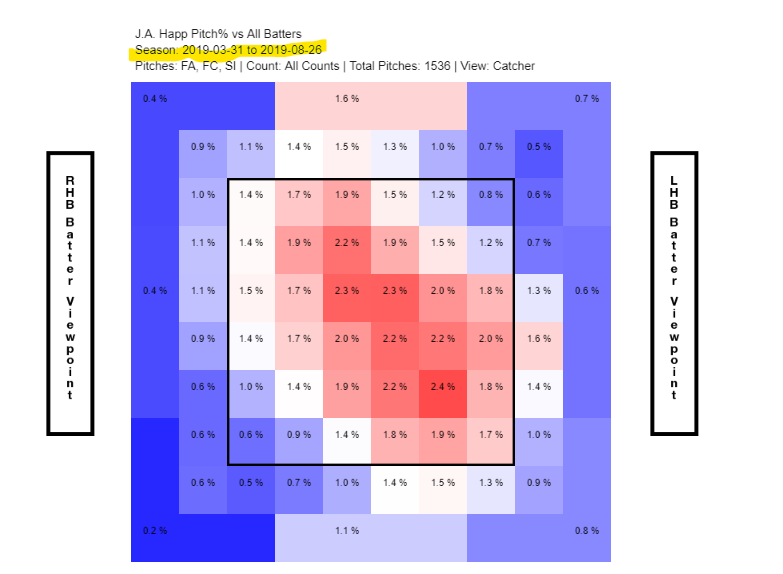 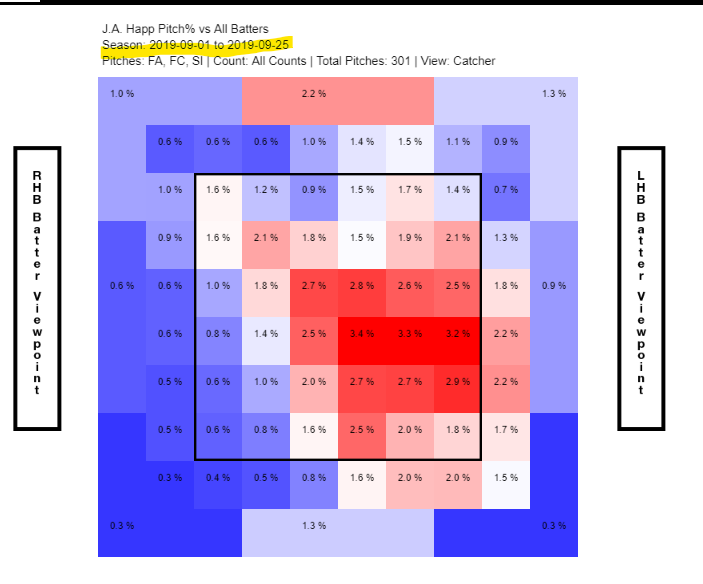 He stopped doing that! You can see how he’s preferred to target away from righties, in on lefties, and much lower in the zone than you’d think for a Searage alum. This is, more than the sinker, the most positive sign from Happ’s September. He’s a veteran and able to make adjustments when things aren’t working.

Now, there are some debatable points in Happ’s final month that could push pause on this optimism. He ran a hilariously high IFFB%, 11%, in September, and those kind of numbers are usually reserved for the extreme hard throwers in baseball. Guys like Gerrit Cole, Justin Verlander and Jacob deGrom can induce weak popups because their fastballs are so hard hitters can’t make reliable contact. That doesn’t mean Happ can’t induce that kind of contact - Masahiro Tanaka and Clayton Kershaw don’t throw 98, and they still generate plenty of popups. It’s just not something I would bet on being sustainable going forward.

Happ was also probably the biggest victim of the home run crazyness that we saw in 2019. At his peak — or trough — almost a third of all fly balls allowed were leaving the park, and that number plummeted to a probably-unsustainable 7.1% in September. For context, 7.1%, if managed over a full year would be almost 25% less than the best HR/FB rate in the game. Don’t expect Happ to be able to suppress the long ball like that over any significant stretch.

So we have a mixed bag of results — Happ’s pitch usage, and especially his changes in location, are really positive indicators that his September wasn’t dumb luck. He knew he had to make adjustments over what wasn’t working and he could execute them, probably the most difficult thing to do in baseball.

However, there were some elements of “luck”, or perhaps, random positive deviations from the mean that helped Happ too. He’s not going to induce as many pop flies, and he’s going to give up more home runs than he did in September. However, it’s also reasonable to conclude that his August 31% HR/FB% was illogically high and we can expect some normalization there.

For what it’s worth, Steamer isn’t buying any of this, projecting Happ to be almost equally as bad in 2020 as he was in 2019. Projections are just that, though, and if Happ can maintain his approach with regards to location, he might not be the sixth-worst starting pitcher in baseball next year.