What version of Ottavino will show up this season?

The Yankees held a 1-0 lead through four innings against the Astros in Game Two of the 2019 ALCS. With George Springer, a powerful right-handed outfielder, up to bat, Aaron Boone called on Adam Ottavino, the team’s de facto righty specialist to neutralize the threat. After recording the first out, Ottavino left a cement-mixer slider over the plate. Springer sent the ball 413 feet to left field, tying the game.

The Bombers lost that game in extra innings, but that’s not all. Ottavino lost all effectiveness, allowing three runs (two earned) over his next three appearances—totaling one whole inning. He became unpitchable by postseason’s end, and that collapse has fans wondering if the right-hander can bounce back in 2020.

FanGraphs doesn’t give a rosy projection for Ottavino. They essentially expect a full regression to his 2017 form, when he ranked among the game’s worst qualified relievers. That line, of course, represents a forecast—not a crystal ball prediction. He could just as well stretch out his peak a little longer. So what should the fans keep an eye on as Ottavino jogs in from the bullpen this season? A few areas come to mind.

The Yankees used Ottavino as a right-handed specialist in the postseason, largely because of his platoon splits. In the regular season, he brought death to righty bats, holding them to just a .255 wOBA. Southpaws, meanwhile, fared somewhat better, managing a .317 wOBA.

With a three-batter minimum in place for 2020, teams can’t rely on a pitcher to make appearances based on favorable platoon splits. From the sounds of it, the Yankees won’t have much adapting to do.

“For us, I don’t think much changes, especially during the regular season,’’ manager Aaron Boone explained to Dan Martin. “I don’t like to use our high-leverage guys when they get up and in because we don’t pitch guys three days in a row or four [games] in five days. Unless it’s a unique situation, we’re not doing that for a hitter.”

As one of the team’s high-leverage relievers, Ottavino logged 66.1 innings in 2019. He finished only behind Luis Cessa in terms of reliever workload for the team. While a touch under the 77.2 innings he tossed with the Rockies in 2018, that’s still a substantial burden.

In fact, there exists some evidence to suggest that Ottavino wears down as the season progresses. Consider his K-BB% throughout the years, particularly in the stretch months.

Does Ottavino run out of gas in August and September? The evidence suggests it’s possible. While I would like some more info before making a sweeping statement on the subject, it definitely bears watching. That holds especially true when one remembers that this year will be Ottavino’s age-34 season. No one can realistically expect a 34-year-old reliever to be in top form after running up a hefty workload during the season. It would behoove the Yankees to keep Ottavino as fresh as possible.

Ottavino possesses one of the most dangerous pitches in baseball: a slider that appears to defy the laws of physics. The pitch ranked second only to Will Smith’s slider in terms of FanGraphs’ pitch values over the past two seasons. That doesn’t mean he can’t improve the offering, though.

After peaking in July, his swing-and-miss percentage cratered shortly thereafter. At the same time, his hard-hit rate skyrocketed. 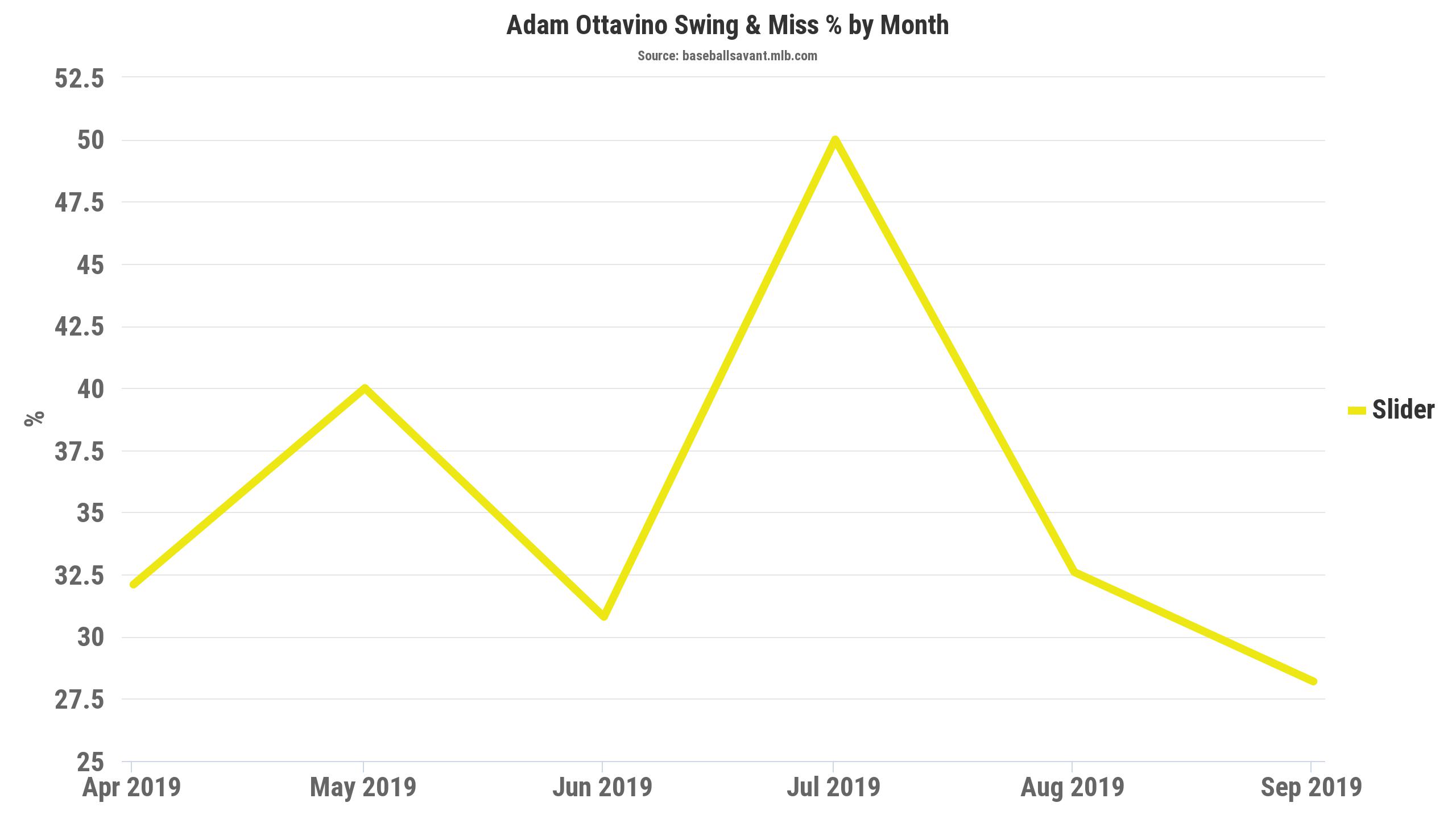 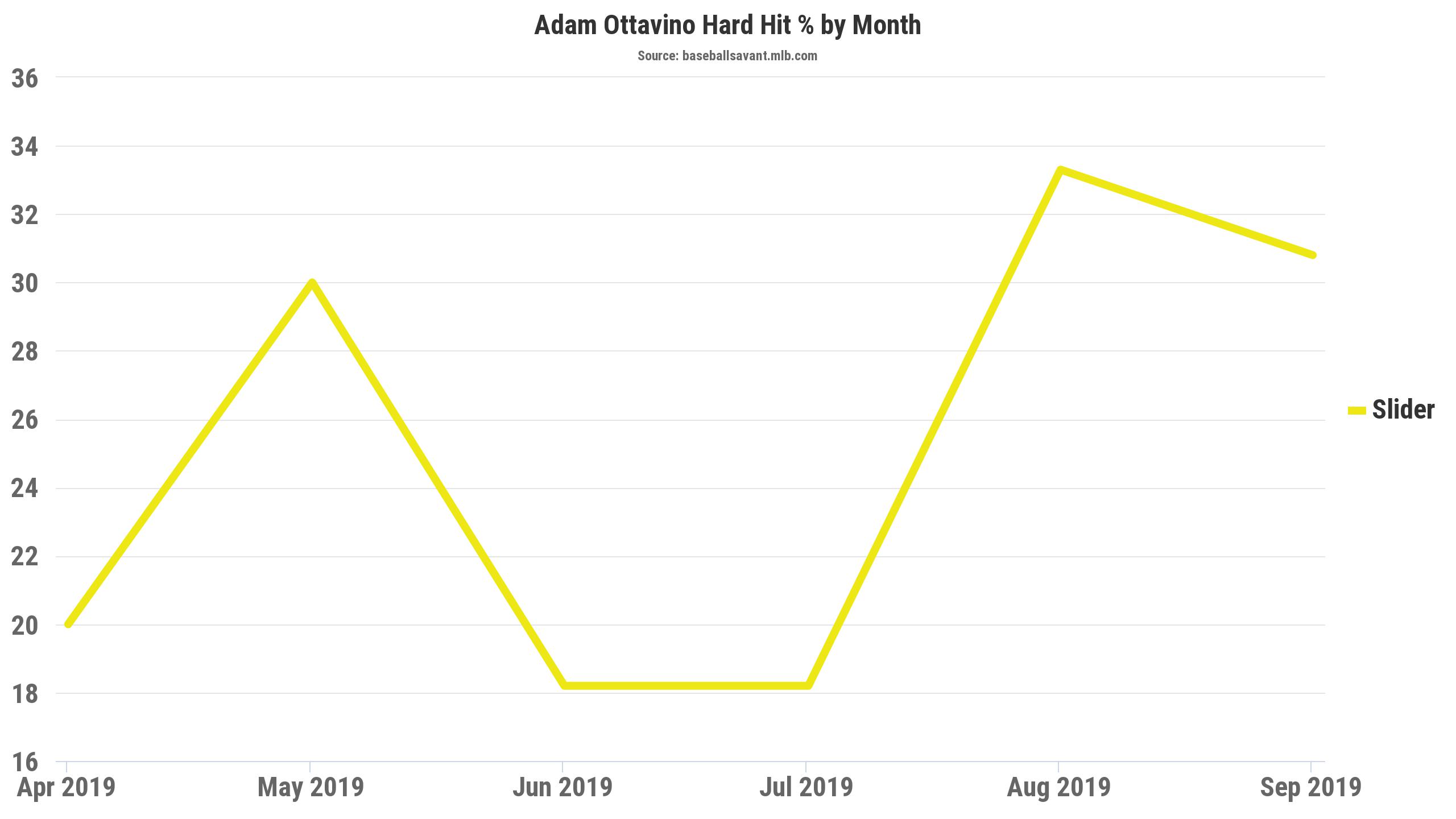 What explains the precipitous drop in effectiveness? Two factors—similar, yet distinct—come to mind. First, he poorly located his slider during the dog day. He left the pitch in the zone at an alarming rate in August.

Ideally, the pitch starts in the zone, then breaks away from the batter after he commits to swing. Ottavino occasionally backdoored the pitch to get a called-strike, especially early in the season. While that worked for a while, hitters likely caught on and adjusted accordingly. In general, one would advise against leaving it over the plate; a slider that hangs middle-middle has a future as a souvenir.

Relatedly, Ottavino’s slider picked up more horizontal movement as the season progressed. While batters knew to expect the pitch—he threw it 44.9% of the time last year—he had to keep them honest about it. By throwing the pitch with too much movement, where it sweeps too far, then hitters could have had an easier time laying off it.

The slider proves key to Ottavino’s success; it’s his elite pitch. Whether he gets the pitch on track or not will determine if he’s an endgame reliever or a liability. Thankfully for the Yankees, the right-hander stands out as one of the most cerebral pitchers in the game.

His self-made pitching lab in Manhattan generated a ton of publicity in the 2018-2019 offseason. Additionally, Ottavino spoke with FanGraphs’ David Laurila about pitch construction last summer. The conversation featured this fascinating segment on his slider:

Once I got in front of an Edgertronic, I learned how to generate gyro spin and throw this cutter pitch I have now. It’s a much harder cutter-slider, with different spin. What we were going for was as close to zero spin efficiency as possible. But what I ended up finding was that it wasn’t very effective. I needed to have closer to 20%, so that it would still bite a little bit, and maintain velocity. I didn’t want it to bite a ton, just bite a little bit. When it was right around zero, it basically did nothing, which sometimes can be fine, but in my case I gave up some home runs on it. I feel a more movement is better for me.

Father Time remains undefeated when it comes to skill erosion, but should his health hold up, I have confidence in Ottavino figuring things out.

I’m more bullish on Ottavino than FanGraphs’ projection. If Aaron Boone doesn’t Scott Proctor him and if he can tighten the slider up, then I see no reason why he can’t go back to being a force at the back of the bullpen.

He doesn’t even have to be the setup-man extraordinaire. The Yankees have three other relievers with similarly elite pitches who can share that burden. If he pitches like he did through July of last year, then things should be just fine.