The first step to getting the ace-version of Severino in 2020 is by eliminating his tendency to tip pitches.

Share All sharing options for: The Yankees should still focus on Luis Severino’s pitch-tipping issues

Last week, Luis Severino revealed the steps he’s taken to combat his problems with tipping pitches. In the context of speaking about the Astros cheating scandal, Severino detailed the hours he has spent in front of a mirror and in the video room to identify how he was revealing his pitches. His acceptance of the legitimacy of these pitch-tipping claims is the first step in the right direction heading into the 2020 season.

In 2017, Severino emerged as the true ace of the Yankees staff and a budding superstar amongst the elite starters in the league. His third season in the majors, he put together a campaign unparalleled in the Bronx since the first years of CC Sabathia’s Yankees tenure. Across 31 starts and 193.1 innings pitched, Severino compiled a 2.98 ERA (152 ERA+), 3.08 FIP, 1.040 WHIP, and 10.7 K/9 rate. This performance earned Severino an All-Star nod and a third place finish in Cy Young voting.

In his first start after the layoff, Severino was shellacked for seven runs across five innings pitched. The second half of 2018 is a stretch Severino would like to forget, during which he sported a 5.57 ERA and 1.429 WHIP while giving up over half a home run more per nine innings. What’s interesting is his 3.37 FIP and improved walk and strikeout rates would suggest his struggles came from the batted ball.

Severino’s slider in particular was—and still is—instrumental to his success. It is a devastating pitch, producing a measly .501 OPS and 45 wRC+ while generating a 35.9 whiff percentage and 38.1 strikeout percentage between 2017 and 2018. If Severino’s 2018 second-half woes were down to pitch dynamics, one might expect his slider to have been less sharp. Worryingly, this was the case, as both the vertical and horizontal movement on Severino’s slider decreased significantly from July to August. 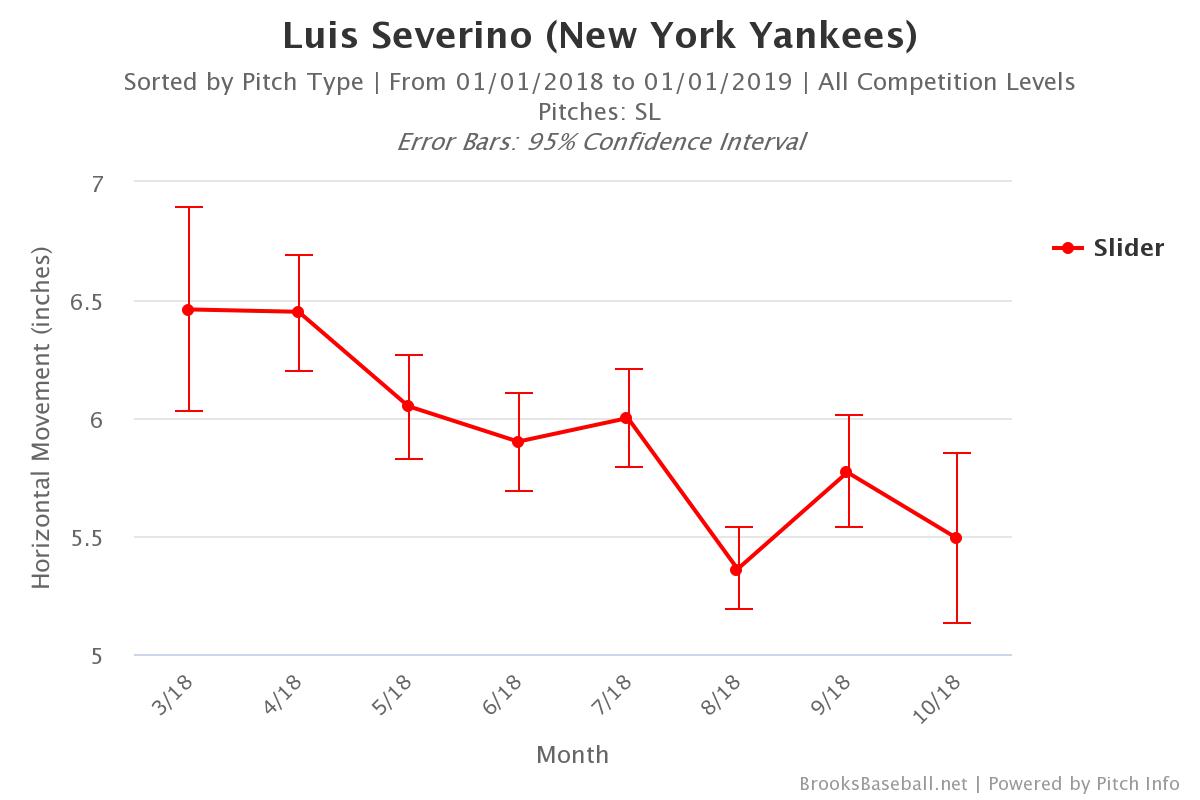 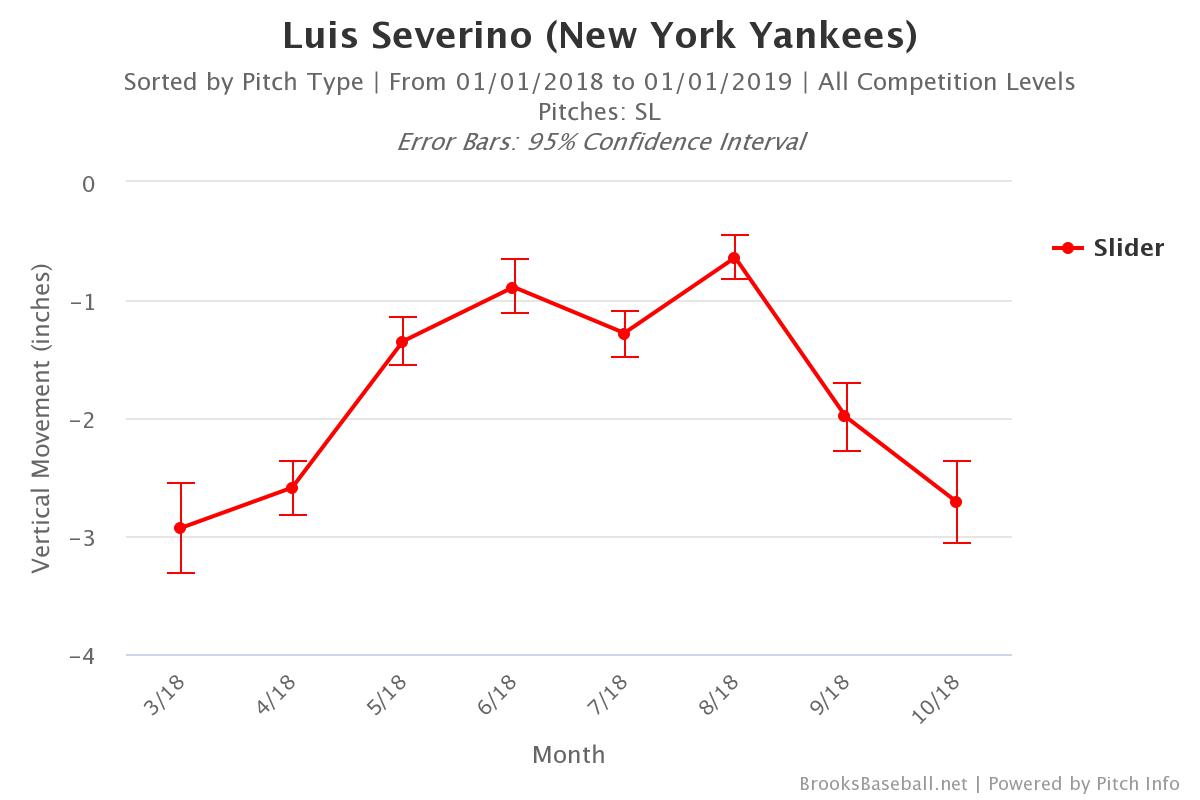 However, these findings do not tell the whole story. Statcast measures metrics including expected batting average (xBA), expected slugging percentage (xSLG) and expected weighted on-base average (xwOBA). These are based on certain pitch variables like velocity, spin rate, and movement.

In the first half, Severino’s actual results against his slider all outperformed the expected statistics. The batting average, slugging percentage, and wOBA were all lower than their expected counterparts. Assuming a blunted slider was the culprit for his second half decline, one might see elevated expected statistics, but with actual results still falling below the expected numbers. However, this is not the case.

Post-All Star break, batters hit his slider better than Statcast predicted they would. Therefore his second half difficulties did not arise solely from a flatter slider. This is the first clue that Severino’s troubles stemmed from pitch tipping in addition to mechanical issues. Batters’ swing-and-miss statistics against the slider reveal the second clue.

The whiff percentage on Severino’s slider both in and out of the zone cratered to season-lows in July and August. Batters seemingly knew when a slider was coming, and made greater contact when swinging at one. I must qualify these findings by noting that the chase percentage against Severino’s slider actually increased in the second half, which would contradict the assumption of pitch-tipping, however one explanation may be that batters were jumpier upon determining a slider was coming. 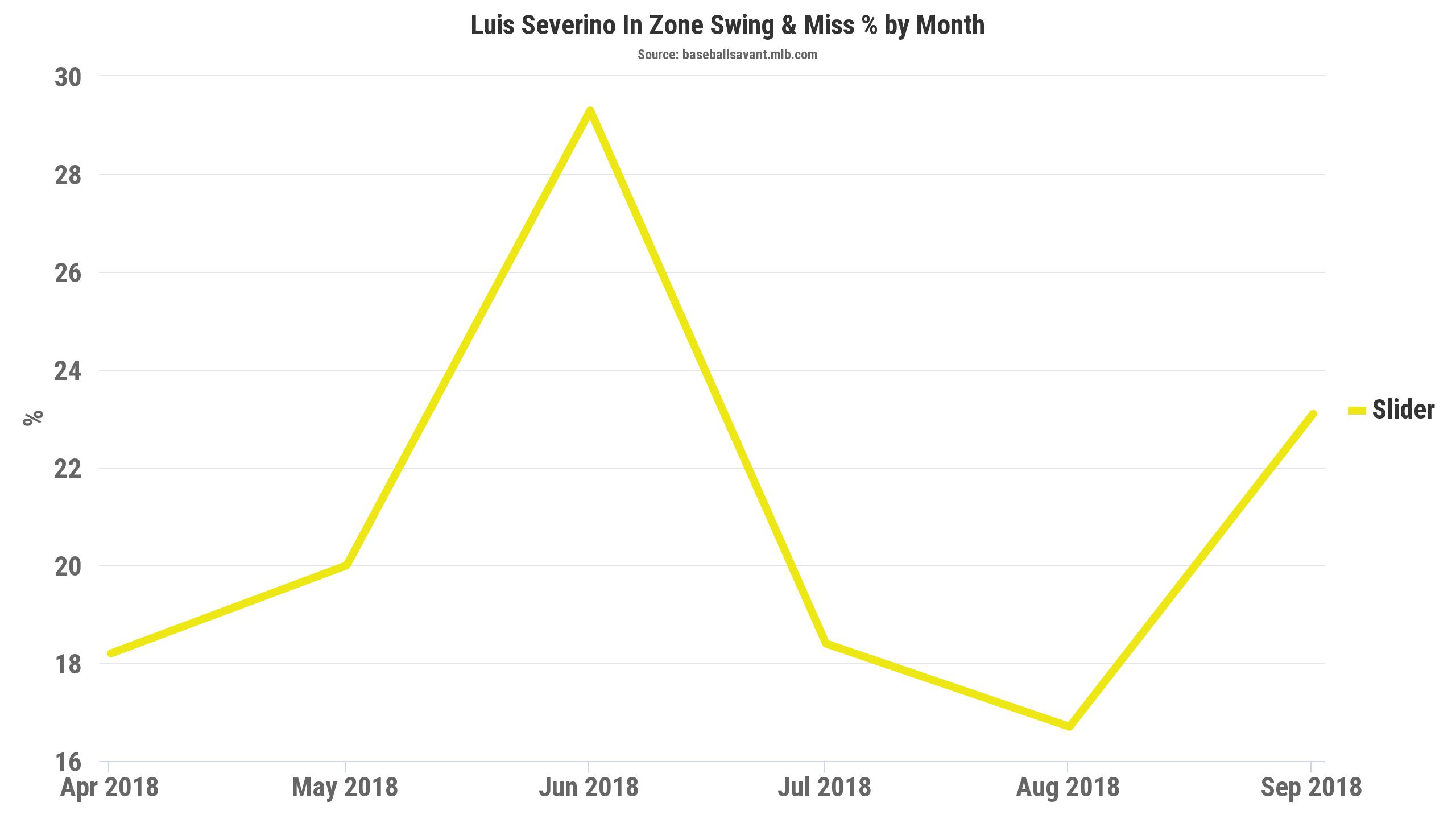 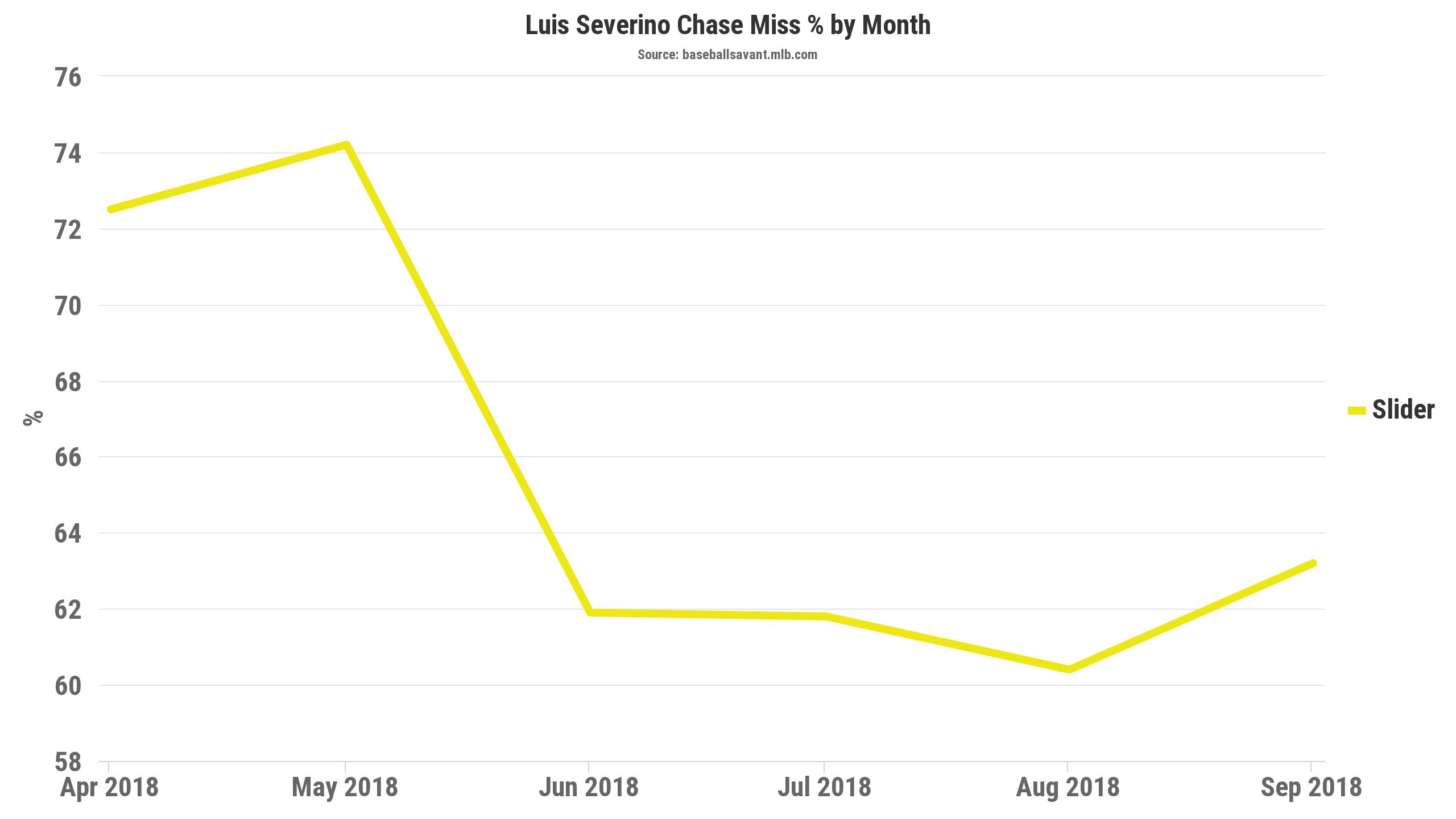 So what exactly was Severino doing to tip off his pitches to batters? Ben Harris of The Athletic (subscription required) detailed his findings, which at first glance seem microscopic. His first finding had to do with Severino’s hand positioning in the set. His second finding concerns Severino’s head movement with a man on second base.

Harris found that Severino held his hands slightly higher when setting before the delivery of a fastball, but only a couple inches above the positioning for an offspeed pitch. He also discovered that with a man on second base, Severino checks the runner and then glances at third before throwing a fastball. When throwing offspeed, Severino omits the glance at third, instead throwing immediately home after checking the runner. The ability to detect these minute changes is one of the tools that separates major league hitters from the rest.

John Flaherty of the YES Network reinforced these findings following the Yankees’ ALDS exit in 2018. In a since-deleted tweet, he explained that there were “two tells for Severino, it’s amazing — the glance toward third [base] and the position where he had his hands out of the stretch.” David Ortiz and Pedro Martinez have also echoed this discovery. This evidence lends itself to the conclusion that Severino was indeed tipping his pitches in the latter half of the 2018 season.

One of pitching coach Matt Blake’s top priorities heading into the season will be to address this behavior. It is one thing to know how Severino is tipping his pitches, it is another task entirely to fix it. The slight variations in his hand positioning may not even be a conscious doing. Severino’s mound routine and windup are hardwired through countless repetition.

Changing a learned behavior is a daunting prospect. Maintaining focus on every pitch is an already demanding task without having to think about hand and head placement. Actively attending to these differences is an unwanted distraction, and could have detrimental effects when pitching. However, if Severino wants to return to the heights of 2017, he doesn’t have a choice.

The final months of the 2018 season were not kind to Severino. Not only did his slider have less bite, batters also knew it was coming. With the knowledge in hand of what gave away his pitches, there is hope he can institute the appropriate fixes and continue on the trajectory to becoming one of the best pitchers in baseball.