After more than $58 million in career earnings, he’s certainly Rich, but on the heels of his worst season in recent memory, is he over the Hill?

He turned 40 before last season, he’s thrown almost 1,000 innings across 16 major league seasons, and he’s looking for at least one more payday before hanging ‘em up. Most recently a Twin, Rich Hill threw 38.2 innings across eight starts in 2020, suffering just a single setback of a sore shoulder, and evading a recurrence of the myriad blister issues from seasons past. His typically solid 3.03 ERA, however, may have belied some regression.

What’s odd about Hill’s average fastball velocity is that it, along with Hill’s career, seems to have peaked twice — and significantly higher the second time compared to the first. Before 2012, Hill never scratched an average mark of even 89 mph. From 2012 to 2019, however, following a full recovery from a 2010 Tommy John surgery, Rich Hill never threw slower than 89 mph, including an average fastball of 92.4 mph in his 2013 campaign.

In 2020, however, his average fastball velocity of 87.8 mph was the lowest of his career to date, after a steep 2.2 mph decline from 2019’s still passable 90.7. As a crafty lefty, he can still befuddle batters with his patented breaker, but that fastball has become easier than ever to bash. Last season opponents posted an xwOBA of .399 against Hill’s heater, even worse than his already poor .334 wOBA against the pitch that could more aptly be referred to as a “luke-warmer.” Either Hill’s shoulder was far worse than he let on, preventing him from ever really rearing back, or his age has caught up to him, and his best fastball is a relic of the past — neither outcome prescribes a particular optimism for Hill’s 2021 projections.

In terms of performance, Hill’s real stats significantly outperformed his expected data cross the board. Specifically, his ERA was more than two whole runs lower than his xERA, and nearly a run below his FIP. While Hill has proven to be the kind of pitcher capable of outperforming his peripherals in the past — like Cole Hamels, another past-his-prime lefty reliant entirely upon craft absent of power — he’s never done so by such a drastic margin.

Though he generated strikeouts and limited walks at excellent levels in 2019, each of those metrics have gone down the toilet, dragging the rest of his expected stats with them. He rarely strikes batters out anymore, a metric he had previously been among the league’s leaders in, as that number dropped by a full ten percentage points from ’19 to ’20. Though Hill had been hit harder in previous years than in 2020, he’d never been hit so consistently. From 2019 to 2020, opposing batters’ chase contact rate rose nearly 20 percentage points (58.9 percent to 78.6 percent), and their overall contact rate rose from 77.3 percent to 84.7 percent. His stuff is good enough to generate some more bad contact than average, but not sharp enough to ever miss bats. 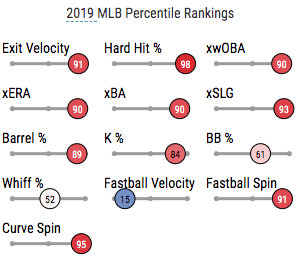 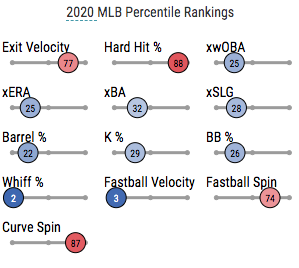 Even though his exit velocity and hard-hit percentage each remained in the top quarter of qualified pitchers, and his upper echelon fastball and curveball spin generate enough movement to get batters to miss the barrel, they are no longer thrown with enough force to actually generate swings and misses, and therefore Ks. Hill’s 2020 whiff percentage finished in baseball’s second-lowest percentile, and his strikeout percentage in the 29th, each by far the lowest of his career in the Statcast era.

Even without the sharp stuff of his past, Hill can still eat up innings at the back-end of a rotation, so long as his shoulder struggles and finger blisters don’t flare up again, as they have a half-dozen times prior. For the right price, no more than a couple million dollars, Hill could be a value add for the back end of a Yankees rotation just trying to tread water, with an outside shot at a resurgence. For any price above that, the Yankees should steer clear, as Hill’s more than likely way too far removed from his athletic, post-TJ prime to be a reliable second or third starter at age 41.