The fielding wizard’s status both as a Cub and as a productive hitter is shrouded in mystery.

The Padres shocked the baseball world earlier this week when they traded for Rays ace Blake Snell. But they weren’t finished there, and in perhaps an even more improbable move they dished for Cubs ace Yu Darvish. This final piece of business sent two messages resounding through the league: The first is that the Padres are ready to win now. The second is that the supposed Cubs dynasty could be initiating its rebuild.

When the Cubs broke their 108 year World Series drought in 2016, there was speculation that a dynasty was being built. They won the title on the backs of a nucleus of young, homegrown stars in Kris Bryant, Javier Báez, Willson Contreras, Kyle Hendricks, and Kyle Schwarber, and there was no reason to believe at the time that the team could not replicate their success.

Well, here we are four years later, and the Cubs still waiting for a return visit to the Fall Classic. Due to a combination of escalating costs and regression, that once-dynamic core is starting to fall apart, taking the rest of the team with it. Theo Epstein, architect of the World Series team, stepped down as president of the team. Kyle Schwarber was non-tendered. Darvish and the $62 million remaining on his contract was just traded. Trade rumors swirl around Bryant and Contreras.

Their new president, Epstein’s right-hand man Jed Hoyer, insists this is not a full-scale teardown, but one can be forgiven for reading the tea leaves. Hoyer claims that salary relief was not the motivation for trading Darvish, yet the Cubs sent only $3 million to the Padres, rather than paying more for a meatier prospect return. He denied reports they were shopping Contreras, though in the same breath stated that no player was untouchable.

The Yankees should take note of this apparent fire sale, as there is the possibility they could grab an impact player at a discounted rate. One such player: Javier Báez. It is still unclear whether DJ LeMahieu will return to the Yankees, and such a reunion is complicated by Gleyber Torres’ inability to adequately defend at shortstop. Instead the Yankees could turn to Báez, fixing the defensive woes at shortstop for a lower cost than LeMahieu may command. Speaking of shortstop defense, they don’t call Báez El Mago (The Magician) for nothing.

Between 2018 and 2019, Báez was one of the premier two-way shortstops in the game. He proved capable of producing 30 home run, 100 RBI, 5+ fWAR seasons all while sitting near or at the top of practically every defensive leaderboard. He always excelled in the field, so the fact that he finally put it together at the plate vaulted him into superstardom. That is, until 2020 struck.

There’s no way to sugarcoat Báez’s 2020: it was downright abysmal. He slashed a measly .203/.238/.360 with a 57 wRC+. He has always been a free swinger, but he took it to another level this past season, as his 31.9 percent strikeout rate and 3.0 percent walk rate situated him in the seventh and second percentiles respectively. He still provided stellar defense, and it was this that prevented him from falling into negative WAR territory.

People seem ready to chalk up Báez’s 2020 struggles to small sample size and bad luck, but I am not so optimistic. There are two other star players who notably underperformed in 2020, and the discrepancy between their metrics and Báez’s is quite stark. 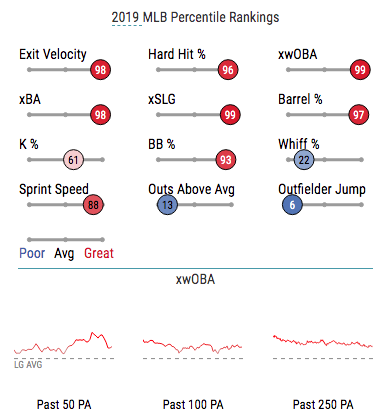 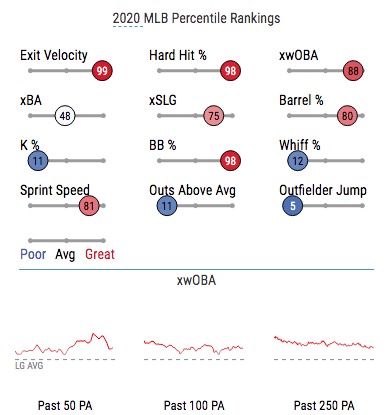 This is Francisco Lindor’s: 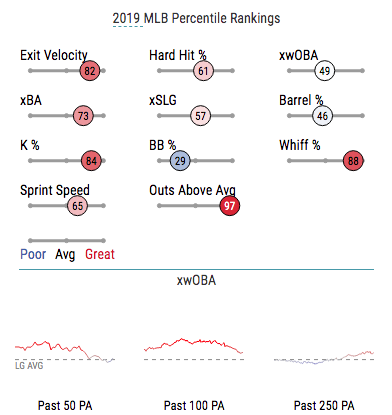 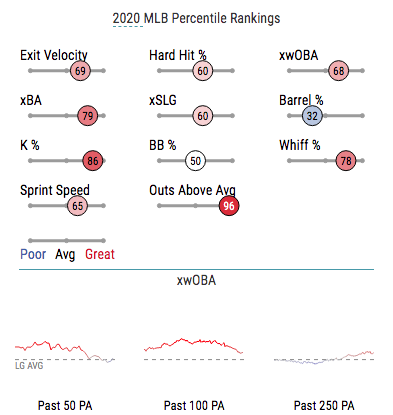 And here is Baez: 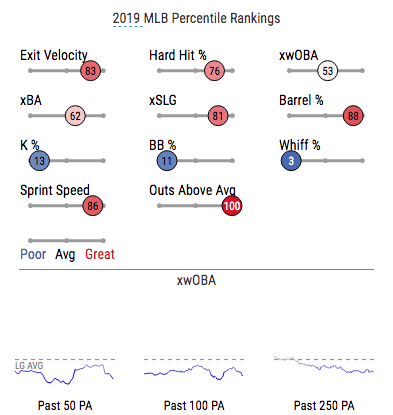 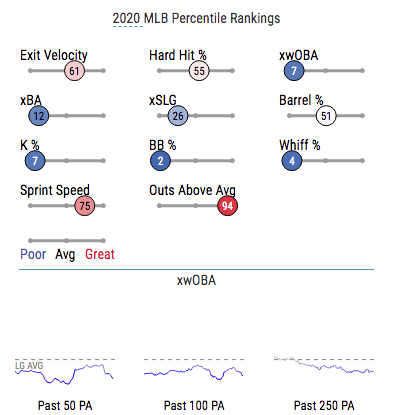 There’s a lot going on here, but what I want you to particularly pay attention to is the batted ball data — namely exit velocity, hard hit percentage, and barrel percentage. We know that batted ball data stabilizes much more rapidly than counting or rate stats, therefore the small sample size of 2020 is still large enough to draw significance from.

What these three comparisons show us is that while Yelich’s and Lindor’s substandard results in 2020 were as much down to bad luck as anything, in Báez’s case we see a substantial regression in quality of contact. That Yelich and Lindor produced similar exit velocities, hard hit rates, and barrel rates in 2020 as in the previous year suggests that 2021 will more closely resemble 2019 than 2020. However, Báez’s decline across those batted ball metrics raises the very real question of which version of Báez we can expect going forward.

This is a legitimate concern for El Mago as he enters his final year of arbitration. He needs to demonstrate to teams that the 2020 season is not indicative of his true ability in the batters box. That may prove to be an especially difficult task, as his counting, rate, and batted ball stats in 2020 line up with his career numbers prior to 2018. This may scare potential suitors away. After all, he is one of the five shortstops set to become a free agent after this season, and his four other competitors in that market all have better career track records when it comes to hitting prowess.

It seems counterintuitive, but this could work to the Yankees’ favor should they swing a trade for Báez. He may be open to discussing an extension as a hedge against another down season in his walk year. This would create a win-win situation for the Yankees, as at the very least they would have upgraded from one of the worst defensive shortstops in the game to one of the best. And should Báez return to 2018-19 levels of production, the Yankees will have locked up one of the game’s best shortstops at well below market rate. This is pure speculation, and is more of an exercise to demonstrate all the different thought processes that could go on when considering adding a player to the roster.

It would not be easy to pry one of the fan favorites away from the North Siders. He is the second-most affordable in 2021 of the shortstops set to hit the market after the season, and still provides elite defense at a premium position. The Cubs would probably expect a return as good if not better than what they received for Darvish. That being said, the Yankees should at least check on El Mago’s availability, as it is not often you get the chance to acquire one of the best defenders of his generation.