The backup catcher hasn’t taken a free pass in two calendar years. The question is, why?

Share All sharing options for: Why can’t Kyle Higashioka walk?

One of the reasons why on-base percentage is a better metric than batting average is because there’s a whole host of possible outcomes that aren’t a hit or an out. Failing to fold those into our evaluation of a player misses a lot of what can make that player really valuable.

Unless you’re Kyle Higashioka — in which case, for the last two years, there has been almost no reason to look at your OBP. He hasn’t drawn a walk since August 30, 2018, hasn’t been hit by a pitch since the 19th of the same month, and if it weren’t for a single sacrifice fly, Higashioka would boast the exact same batting average as his OBP over the past two calendar seasons.

Higgy has a 3.9 percent walk rate for his career, with an 8.1 percent rate in his first 99 plate appearances, and 0.0 percent in the 105 plate appearances following that. What makes this kind of analysis fun is that demarcation line — in Kyle’s first two seasons (when he did walk), he put up virtually the same PA mark as he had in his more recent two, walkless, seasons. We’re operating on small samples, but at least each sample is roughly the same size. 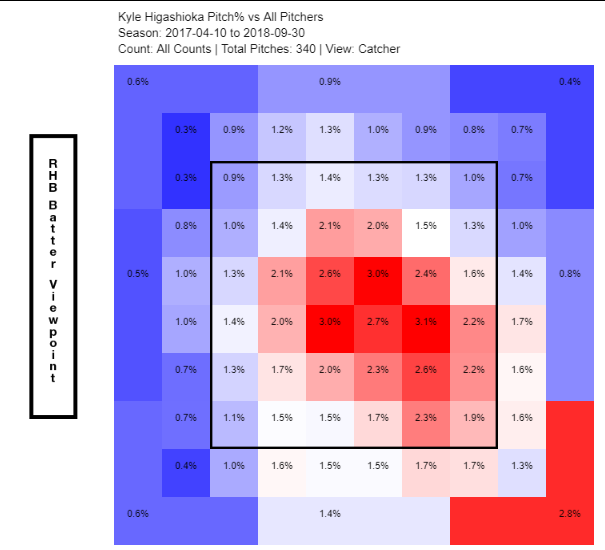 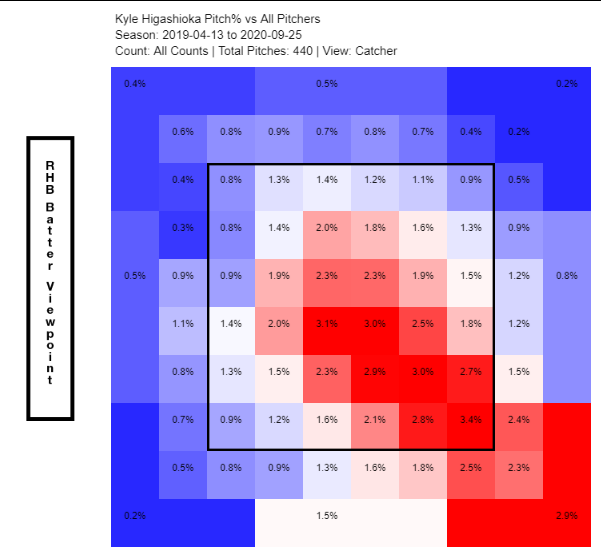 First, we have to look at the actual pitches that Higashioka is seeing, and we do see a slight increase in pitches in the zone over time. Breaking it out by season looks like this:

So he is seeing a moderately higher rate of pitches in the zone, but critically much higher than league average — in 2020, for example, 41.3 percent of all pitches were in the strike zone, and Higgy saw the 20th-highest percentage of strikes of all hitters with at least 40 plate appearances. Pitchers just aren’t scared of him, and he hasn’t proven himself a good enough hitter to make guys worried about leaving pitches in the zone.

It’s not just that he’s walking less, though, it’s that he’s not walking at all. Baseball is a weird, unpredictable game — a couple of years ago, Eno Sarris wrote a great article about how many hits Chris Hayes, MSNBC pundit, would get if he had a full season of 700 plate appearances, and concluded it was likely he would luck his way into in a couple. You would think that Kyle Higashioka, who is worlds better at baseball than probably anyone reading this post, would luck his way into a walk at some point over the past two years.

So far that hasn’t happened, and that’s weird. But as much as it personally fascinates me, it’s really not that historically notable, mostly because of how little Higgy has actually played over the past two years. It’s right around the 450th longest streak in MLB history, according to Baseball Reference’s excellent Stathead (née Play Index). Longer streaks have been accomplished even in the past few years, with Arismendy Alcantara playing 60 games without a single free pass in 2017, and Hanser Alberto going 63 games without a walk between 2015 and 2018.

At the end of the day, Higgy’s psychological block around walks is probably a combination of his player profile and plain old luck. He’s not a good hitter, and that’s reflected in the way that pitchers challenge him — the only Yankee hitter who saw more pitches in the strike zone than him in 2020 was Tyler Wade. Higashioka is probably never going to be a guy who walks a ton, just because pitchers aren’t afraid to throw him strikes.

And the other half is luck. It is kind of funny that Higashioka’s streak has lasted so long by calendar days — 850 to be exact — but in the grand scheme of baseball, it’s not that historically notable yet. You can bet that it’ll be something I track for 2021 too, and the more games we see him in, the more we’ll know about whether Higgy’s aversion to walks is due to luck or inability.