The Reds have made all their pitchers available, and Castillo is the best of them.

One of the things I’ve been doing a lot of lately is combining pitchers’ 2019 and 2020 stats whenever possible. The 2020 season is hard to evaluate for a whole bunch of reasons, so by folding it in to the 2019 campaign, we get a little more robust context. Whether you’re isolating 2020 or not, though, Luis Castillo is one of the best pitchers in baseball.

Since the start of 2019, Castillo has ranked among the top 15 pitchers in all of baseball in ERA, FIP, K-BB%, fWAR, innings pitched, and exit velocity allowed, while inducing more ground balls than any starter in baseball. The Cincinnati Reds are rumored to be listening to offers on both Castillo and Sonny Gray, and while Castillo might be the most expensive acquisition on the market, adding him would give the Yankees a 1-2 punch perhaps unmatched in baseball.

A lot of Castillo’s success ultimately comes down to pitch usage. He boasts some of the best velocity in the game on his four-seam fastball, but the heater is largely mediocre by spin rate, a key driver of fastball movement and deception. He’s apparently addressed that, by turning the fastball from his primary pitch to something made for setting up better pitches later in counts:

It’s evident that Castillo throws his sinker about as often as the fastball, and as he progresses through the count, reduces fastball usage as he gets ahead. The one pitch that he leans on more than ever, though, is perhaps the best changeup in baseball.

Let’s be clear about how Castillo approaches hitters. Early in the count, the fastball is thrown up in the zone to get ahead, then he transitions to the sinker, hoping to induce contact in the zone and keep the ball on the ground, or the changeup, which Castillo really uses to strike hitters out. Really, the key to his approach is the interplay between sinker and changeup: 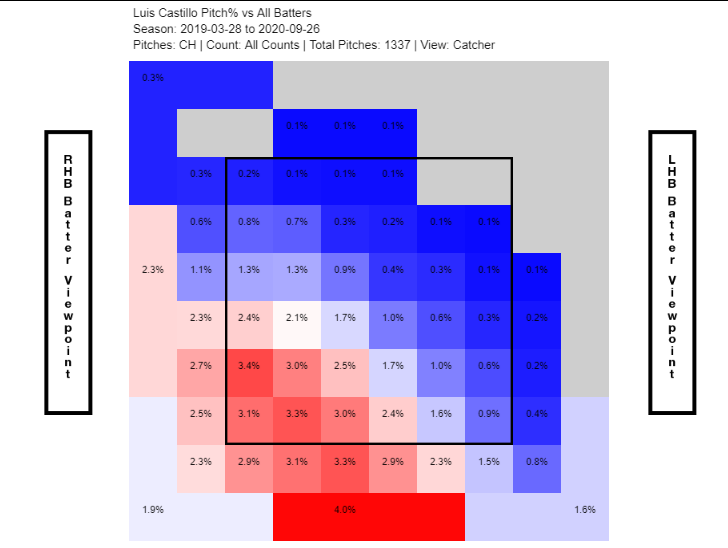 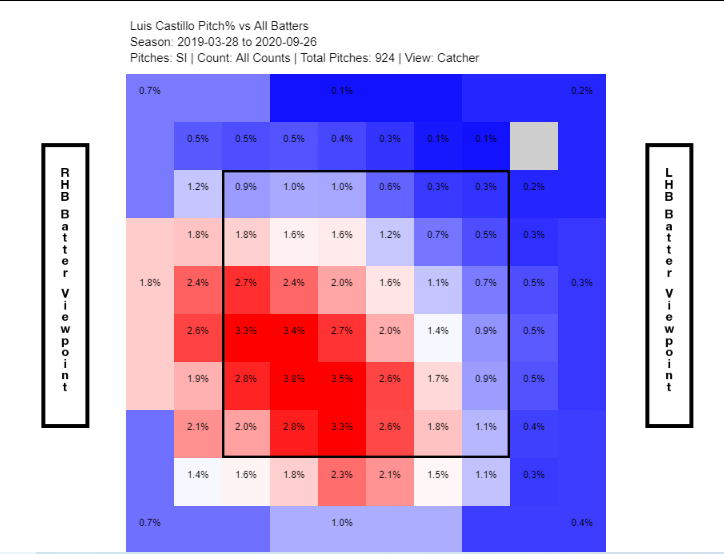 This is Castillo’s changeup and sinker locations over the past two years. You can see some differences — the changeup drops completely out of the zone, as it should, but they both tend to end up down and in on right-handed hitters. Both pitches also have well above average vertical and horizontal movement, and to the hitter, come out of a weird arm slot.

I want to walk you through what this looks like in real time, starting with two examples from perhaps Castillo’s best start of the season, September 11th against the Cardinals. He threw a complete game, surrendering one run on just two hits. We’ll look at two pitches from the second half of that game, one a changeup that Lane Thomas whiffs on, and one a ground ball that Tyler O’Neill taps to second for an easy out.

These are two different pitches, and Castillo is going to two different sides of the plate, and yet the release point is consistent — 5’ 4” off the ground, and from this weird, nearly sidearm delivery. To call it a lower three-quarters is generous, but this kind of release point works to his benefit. A right-handed hitter cannot see that baseball, and while Castillo’s not actually throwing a fastball in either example, this kind of deceptive delivery does a lot to mitigate the lack of deception found in the fastball’s movement and spin pattern. Arm slot goes a long way in determining a baseball’s horizontal movement, and Castillo’s three key pitches all move above average laterally because of this strange delivery.

Now we’re going to look at the swing decision point — the ball is about halfway to the plate, and the hitter has to decide whether he’s going to swing or not:

Now I fully admit I’m not as good at image overlays as, say, PitchingNinja, but the point to take away is what’s circled above. The changeup and sinker are about to cut in two completely different ways, yet at the point where the hitter has to decide whether to swing or not, there’s less than a baseball’s width of difference between the two pitches. Most importantly, they both look like they’re going to end up in the strike zone, and neither one is going to be that close.

And now, the full two pitches:

Both right-handed hitters, yet the arm slot, release point, and tunneling are consistent until the hitter has to decide whether to swing. The pitches end up on completely different parts of the plate, 18 inches away from each other. A masterpiece.

There are two downsides to Castillo, and the first is the walk rate. By throwing so many pitches down in the strike zone, you end up in a scenario where you’re relying on framing or umpiring on any pitch that a hitter lays off on. Think about the way that Masahiro Tanaka can lose the zone from time to time, because hitters lay off the sinker or slider. The same thing can happen to Castillo if the fish aren’t biting.

The other problem, and the more pressing problem, is the cost. Castillo is, again, one of the best pitchers in baseball, just turned 28 a week ago, and is under team control for three more seasons. He is as expensive as it gets, even for a team signaling they’re going to sell.

And this is really the problem the Yankees are faced with, over and over, when we talk about trade pieces like Castillo, Blake Snell, Francisco Lindor or Trevor Story. They just don’t have the high-upside pieces in the system that teams look for in this deal. When Chris Sale was traded, it cost the Red Sox one of the absolute best prospects in baseball in Yoan Moncada, and a high-ceiling, high-risk arm in Michael Kopech. That’s the kind of package it’ll likely take to land Castillo, and if the Yankees aren’t making Jasson Dominguez available, there aren’t the same prospect options that other teams can match.

Luis Castillo has been as good over the last twenty months as Zach Greinke, Lance Lynn and Kyle Hendricks. He’s been better than Trevor Bauer, the best free agent pitcher available, and Germán Márquez, another possible trade piece. He’s also younger than all but Márquez. Getting him would cleave the farm system wide open, but that might be worth giving the Yankees a 1-2 at the top of the rotation they may never have had before.