The righthander appears to be penciled in to a rotation slot for 2021... and that might not be a good thing.

It’s fun that I was writing this post as Aaron Boone remarked that Domingo German was “pitching himself back into the conversation” as a rotation piece for the 2021 season. The team needs a lot of help in the rotation, down two starters from Opening Day last year, Luis Severino maybe possibly coming back at some point in 2021, and Germán is seen as a possible stabilizing influence on the pitching staff for this season.

It’s hard to get a handle on Germán’s putrid performance in the Dominican Winter League. At press time, he’s pitched to a 7.16 ERA, and perhaps more concerning, he’s walking a boatload of batters. The one thing that Domingo has been able to do effectively in the majors is control the strike zone, lowering his walk rate in each of his three seasons. In 2019, he walked just 6.6% of batters faced, compared to 11% in the DWL.

Strikeout and walk rates stabilize quickly, but not quite this quickly, so there’s a grain of salt with all DWL stats. However, the particular problems with walking batters is a concern, seeing as players playing in the DWL, by and large, won’t have MLB-caliber plate discipline. If you’re having trouble throwing the ball in the strike zone at a lower level, you’ll certainly have trouble with it in the majors.

Still, obvious caveats apply when we’re talking about 16 innings pitched after more than a year on the shelf. So okay, that’s the last we’ll worry about DWL stats, and instead, let’s try and evaluate Germán’s 2019, the season that his supporters trumpet as the reason why the Yankees can slide him in to the rotation, no questions asked.

He won 18 games, pitched to a 4.03 ERA, and being that this was the 2019 rabbit ball, that 4.03 ERA translates to a 111 ERA+. That’s a perfectly good, fine, No. 3-level season. As we so often see, though, moving beyond wins and ERA reveals some disturbing trends that cast a lot of doubt on his future performance.

I said above that a real positive of Germán’s performance is that his walk rate has declined every season in the majors, but so has his strikeout rate. In particular, he’s missing bats less and less, which I think explains the changes both in walk and strikeout rate:

Look at the 2019 trend, where you can see the more and more Germán has pitched, guys have swung more at his pitches, and made more and more contract — swing rate is climbing, and swinging strike rate is declining. What’s been interesting is that Germán’s pitch location hasn’t really changed: 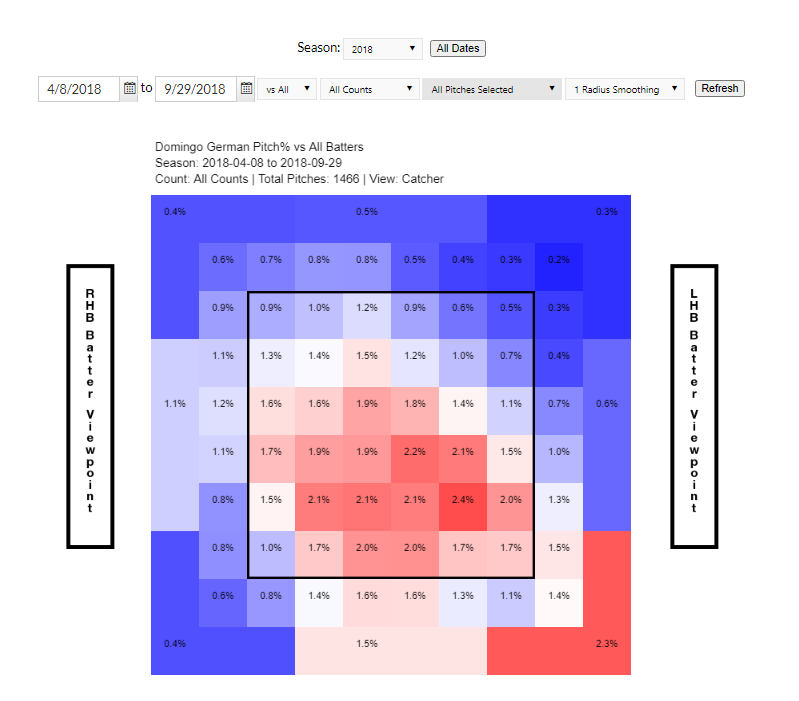 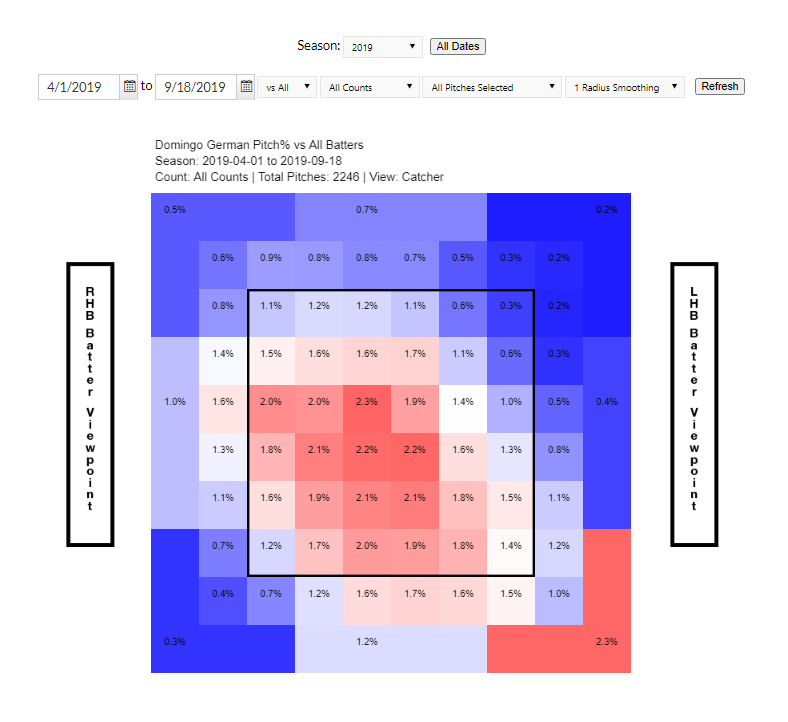 In terms of contact quality allowed, Germán is the spitting image of Brett Anderson or Shelby Miller, and worse than Chris Archer, a pitcher pretty universally recognized as having fallen apart. None of this is to say that Germán can’t be a bottom of the rotation piece, but he is not the kind of pitcher the Yankees would send out for the second game of a playoff series.

There are very real, frightening problems with Germán’s onfield performance. He stopped missing bats, and his stuff is fine, but not great, which usually leads to guys getting teed off on. His changeup is a legitimately good secondary offering, but his curveball is not, as it ranks well below average in both horizontal and vertical movement. Yet for his career, he’s thrown twice as many curveballs as changeups. While his curveball does have a relatively high whiff rate, the change is a better pitch, and one significant adjustment he should make is to switch around those usages.

ERA is a problematic statistic at times, so monthly variations in it need to be discounted, but you can see how closely it tracked a deteriorating FIP as well. K-BB%, for my money the single most important pitching statistic, followed a similar trend over the season:

Now maybe Germán was fatigued — he pitched more innings in 2019 than ever before, and that’s a very valid possible explanation for why he got so much worse as the year went on. Two problems with that explanation exist, though, and the first goes back to those heatmaps. Fatigue is a very possible explanation, but so is the fact that he throws so many pitches over the middle of the zone, and guys started to catch on. You can get away with that kind of location problem for a month, but you really can’t for five or six.

There’s also the fact that if fatigue was a problem two years ago, it’s going to be a problem in 2021. Germán hasn’t pitched in more than a year, and as we’ve seen, that year wasn’t as good as the top line stats might indicate. He could still be a dependable fifth starter in the rotation, but just hasn’t shown the stuff, stamina or ability to adjust to be counted on for anything else.