The Yankees already have the best sinkerballer in the game in Zack Britton. Why not add the runner-up?

Several reports have come out detailing Brian Cashman’s objectives this offseason. Worryingly, those plans do not seem to include any reinforcement of the depleted starting rotation. How then, can the Yankees reasonably expect to account for the innings filled by the likes of Masahiro Tanaka, James Paxton, and J.A. Happ over the last few season? One approach might be Super Bullpen redux. If so, the first name atop my list of targets is Blake Treinen.

When I think of dominant seasons by relievers in the last five years, my mind immediately turns to two players. The first was Zack Britton’s 2016 masterclass, when he accumulated 47 saves and 74 strikeouts in 67 innings pitched. He posted a microscopic 0.54 ERA that season, amassing 4.1 rWAR en route to a fourth-place Cy Young finish.

The second that comes to mind is Blake Treinen’s ridiculous 2018 campaign, when he notched 38 saves and an absurd 100 strikeouts in 80.1 innings pitched. He also amassed a whopping 4.1 rWAR that season, earning a sixth-place Cy Young nod. It looked like he was going to be the league’s next untouchable closer, but then 2019 struck.

After suffering a mid-season shoulder injury that caused him to miss 12 games, Treinen was never quite the same. A handful of poor results forced him to hand over the closer role to Liam Hendriks. Overall, he pitched to a 4.91 ERA, 5.14 FIP, 5.01 xFIP, and 59 strikeouts in 58.2 innings.

Be that as it may, I was still pretty ticked off when Treinen was picked up by the Dodgers last season. His one-year, $10 million deal seemed more than affordable for the Yankees, despite his down 2019. Treinen rewarded the Dodgers’ faith in him, compiling a strong bounce-back season. He totaled a 3.86 ERA, 3.15 FIP, 3.47 xFIP, and 22 strikeouts in 25.2 innings. He also gave the Dodgers some priceless postseason innings, including securing the save in Game Five of the World Series.

There are a handful of encouraging signs that lead me to believe that this reborn version of Treinen is here to stay. In 2019, he posted career-worsts in walk rate (13.9%), exit velocity (88 mph), launch angle (12.5 degrees), and barrel rate (7.7%). Last season, he turned the ship around, setting career-bests in barrel rate (1.3%) and exit velocity (84.8 mph) while cutting his walk rate in half and holding batters to a negative launch angle. He also allowed around one fewer home run per game and posted his best groundball rate (65.3%) in four years. 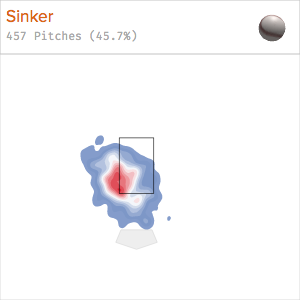 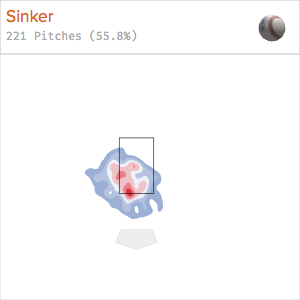 As you can see, a large part of Treinen’s success was his ability to locate a much higher density of his signature sinkers toward the bottom of the zone in 2020, whereas in 2019 there was a much broader distribution of the sinker from the waist down. Also important is that Treinen has maintained elite velocity and movement on his pitches throughout his career. His sinker still hovers around 97 mph while his slider exhibited about 6.4 inches more drop than league average.

One potential point of concern is that, while he does still possess raw strikeout stuff, it did not play out that way during the season. His 20.6% strikeout rate and 22.9% whiff rate were the lowest marks of his career, and placed him in the 33rd and 24th percentiles respectively. That’s a far cry from the rates he posted in his commanding 2018 campaign, when he sat in the 93rd and 97th percentiles in strikeout and whiff rates. But to look at it another way, Treinen proved in 2020 that he does not need to rack up strikeouts to get guys out at an elite level.

Given the happenings on the reliever market - from Brad Hand’s non-tender to the deal signed by Trevor May - it looks like clubs will be able to sign bullpen arms not named Liam Hendriks to relatively team-friendly deals. Both FanGraphs and MLB Trade Rumors agree with this assessment when it comes to their predictions for Treinen’s next deal. The former has him signing for two years and $16 million while the latter has him pegged at two years and $14 million. A seven figure AAV is quite a bargain for a guy who can give you 60+ innings of high-leverage relief.

Let me be clear about one thing. Just because this breakdown presupposes a return to the bullpen of doom does not mean I am an advocate of that plan of action. I think the last few years have shown us the pitfalls of tying up close to 40% of the team payroll in a bullpen of thirty-somethings. However, given the lack of clarity on Brian Cashman’s participation (or lack thereof) in the starting pitching market, running it back with Super Bullpen 2.0 might be the next-best option. Which is why I firmly support the pursuit of Blake Treinen.