Although he took a slight step backwards relative to previous years, the hard-throwing righty remained as one of the more trustworthy options out of the bullpen.

Since his breakout season in 2017, Green has served as the principle fireman out of the Yankees bullpen, as well as the bridge to the final two innings and occasionally as an opener. He has been a true Swiss Army knife for the Yankees, and was one of the few remaining relievers in Aaron Boone’s circle of trust in the 2020 playoffs. Even though he took a slight step back relative to previous years, the Yankees can still feel confident handing him the ball in high pressure situations.

Let’s start with the good. Green remained at or near the top of nearly every Statcast pitching leaderboard, generating weak contact or missing bats entirely at an impressive rate. What impressed me the most about his 2020 campaign were the massive gains he made in the batted ball department. He went from the bottom one percent in the league in exit velocity and hard hit rate, to the 61st and 95th percentiles respectively. It is not often you see a pitcher make that massive of an improvement from one year to the next. 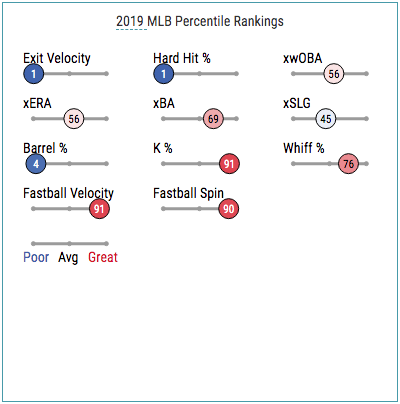 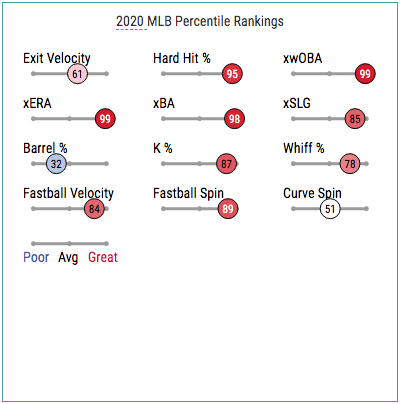 Other encouraging developments included maintaining a high spin rate on his four-seamer and increasing his ground ball percentage. His ground ball rate ticked up by almost seven percentage points, thanks in large part to swapping his below-average slider for a sharp-breaking curveball. I broke down the development of this new pitch back in July, and it is clear its addition to his arsenal paid dividends, generating a 76.5% ground ball rate.

Now onto the areas of concern. We’ll get the minor issues out of the way first. Green lost about a mile per hour off his average four-seam velocity from last year, however the 95.5 MPH he averaged in 2020 is right in line with his career average. Green also allowed around half a home run more per nine than his career average, but I chalk that up to a bit of bad luck, as his home run per fly ball rate was elevated and should regress back to around league average in a 162-game season.

Now for the major concern. Green’s FIP and xFIP marks were at their highest since his debut season. I attribute this to a combination of bad luck and the occasional loss of command on the aforementioned curveball. On the luck side, his strand rate stood at an unsustainably low 57.1%, and that is sure to regress back to his career average of 78.7% in a larger sample size of a normal season. For the record, I must also make mention of his absurdly low .145 BABIP — evidence that Green was the recipient of some good luck as well.

Circling back to the curveball, it was the harder-slugged of Green’s two main offerings. When he missed with it in the zone, batters did damage. It must be noted that hitters outperformed their xwOBA by 100 points and expected slugging by almost 200 points against the curveball, supporting the assertion that batters did disproportionately well in punishing Green’s mistakes. He could certainly benefit from another year of honing the newly-added pitch.

All in all, Chad Green was Mr. Reliable once again for the Yankees in 2020. He threw the most innings out of the bullpen. He was trusted down the stretch with the season on the line. I wouldn’t look too much into the hiccups encountered during the 60-game season. The fact the he remains such a versatile weapon out of the bullpen — serving in roles from opener to multiple innings of high leverage relief — makes him an irreplaceable member of the Yankees relief corps.