Five keys for Gerrit Cole as he takes on the Rays

The Rays gave the Yankees’ ace fits in the regular season, but that was before he found his grove pitching to Kyle Higashioka

Share All sharing options for: Five keys for Gerrit Cole as he takes on the Rays

Game One of the ALDS kicks off tomorrow night and, boy, do we have an exciting pitchers’ duel in the making. Gerrit Cole gets the ball against Blake Snell in a battle of the flame-throwers. The Rays had the Yankees’ and Gerrit Cole’s number in the regular season, but that was while many big Bomber bats were out injured and before Kyle Higashioka took over as Cole’s personal catcher. This time, the Yankees and their ace are fully equipped to take on their ALDS foes.

I’m sure Cole would like to forget his three outings against the Rays this year. Tampa Bay accounted for nine of the 23 earned runs and five of the 14 home runs he surrendered in the regular season. Accordingly, Cole’s 4.96 ERA and 5.14 FIP against them is far from pretty.

However, when we look under the hood, there is reason for optimism. The Rays were certainly the beneficiaries of good luck against Cole, carrying an unsustainably high .417 BABIP. Additionally, Cole’s xFIP of 2.94 against the Rays reinforces the notion that they performed disproportionately well against him.

Now that he seems to be fully settled as a Yankee, having established a close rapport with personal-catcher Higashioka, we can really dig into how he can do to shutdown a potent Rays offense. Starting with the obvious, if Cole is able to keep the ball in the park, he’ll already have won half the battle. See, wasn’t that easy? Joking aside, I have identified five things to look out for that could give Cole the edge in tomorrow’s matchup.

Well this one is a no-brainer. Choi owns a .952 wOBA against Cole this season. No, not a .952 OPS, a .952 wOBA. Just take a second to let that sink in. Choi genuinely owns Cole’s soul. Therefore it is imperative that Cole does not allow Choi to be the guy that beats him. Now I’m not saying put up four fingers and send him to first every at-bat. There’s just no need to groove him a fastball or try to get cute with a get-me-over breaking ball. Pitch to the edges and if he walks, fine.

Throw the changeup more to lefties

This one came as a bit of a surprise to me considering the change is historically Cole’s weakest pitch. That being said, for the most part Cole experienced great success with the changeup in his three starts against the Rays. With the exception of a home run to, you guessed it, Choi, Rays lefties have only put one other Cole changeup in play (a Brandon Lowe groundout) while whiffing 54.5% of the time.

Speaking of left-handed hitters, Cole can expect to see a lineup heavy with them when he takes the mound tomorrow night. The Rays made MLB history when they sent out an all-lefty lineup last month, so they are clearly not short on quality left-handed bats. Luckily for Cole, the Rays’ lefty batters have an Achilles’ Heel: they cannot hit the first-pitch fastball up in the zone. In fact, they only have a single hit all year against the elevated first-pitch heater, and go 0-1 far more frequently than 1-0.

Don’t be afraid to throw the knuckle-curve for strikes

Keep going with what’s been working pitching to Higgy

This is the real X-factor for Cole heading into tomorrow’s matchup. The Rays have not seen him pitch to Higgy, and therefore have not seen peak 2020 Cole. The ace has said on numerous occasions how a major focus for him and Higgy has been to be aggressive in the strike zone. This is a good starting point against a Rays team that was second in the AL in walks and led the league in strikeouts; they’re gonna see a lot of pitches, and they’re gonna make your starter grind.

The second change with Higgy catching is a bit more subtle. Cole has been locating his heater more consistently up and away from right handers. This is a valuable strategy considering the Rays led the AL in pull percentage. 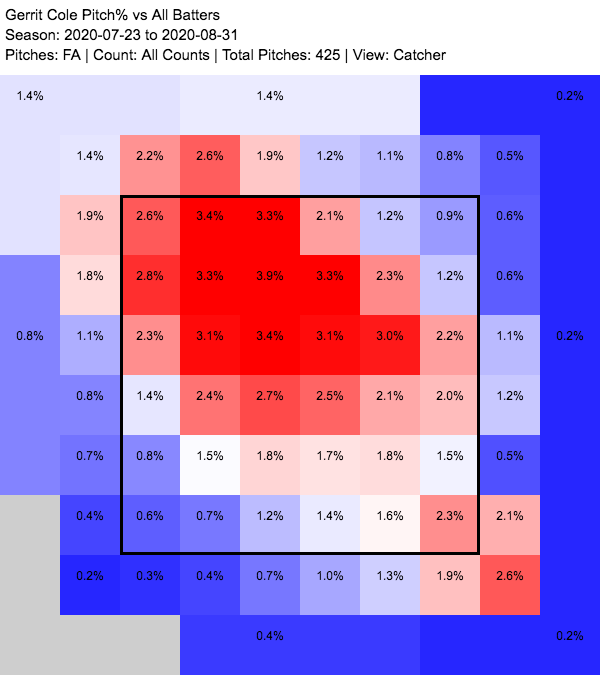 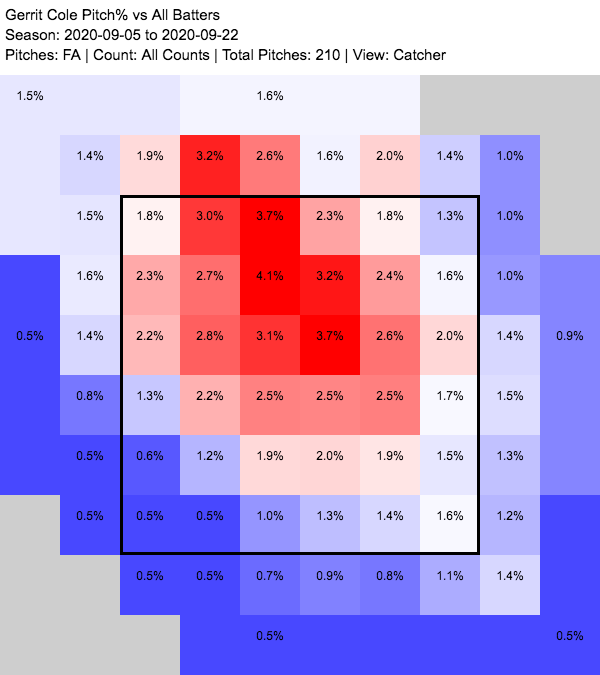 The Yankees need Gerrit Cole perhaps more than any other individual player on their roster if they’re going to be victorious in the ALDS. The scheduling is such that he could potentially start two of the five games, make those matchups must-win scenarios. Cole has looked like a man reborn since teaming up with Kyle Higashioka behind the plate, and if he expands on his blueprint of areas of success against the Rays based on the three previous encounters, I am confident he can pitch as brilliantly as his Game One gem against Cleveland.