How the Yankees can beat Blake Snell

The left-hander has struggled against the Yankees in the past, but has made some repertoire changes in 2020

Share All sharing options for: How the Yankees can beat Blake Snell

To beat Cleveland in the Wild Card Series, the Yankees had to go through the presumptive Cy Young Award winner, handing Shane Bieber his worst loss of the season. The team came in with a hard game plan—jump all over Bieber’s mediocre fastball in order to avoid his devastating offspeed and breaking pitches.

Now the Yankees are faced with another excellent pitching squad, led not by the presumptive Cy Young winner, but by a recent one. Blake Snell is a familiar opponent for the Yankees; he’s faced the team more than any other club in his career. He’s a true four-pitch pitcher, throwing his fastball about 50% of the time, as well as a changeup, slider and curve. He throws them all from a tight release point and tunnel, which makes them difficult to differentiate from each other.

In an era where pitchers increasingly pitch backwards, Snell operates on a conventional formula—get ahead with the fastball, use breaking pitches to put hitters away. He’ll start about 70% of his plate appearances with the four-seam, and has yet to throw anything but a fastball in 3-0 counts, as well as no breaking pitches in 3-1 counts. He puts a lot of faith in his fastball, and has put more on his slider in 2020:

Almost nobody increased their slider usage in baseball on a pure percentage point basis, and Snell was also third in overall percentage increase, throwing his slider 123.88% more often this season than last. His curveball is still his primary two-strike put-away pitch, but his slider isn’t far behind.

His location for the slider hasn’t really changed that much: 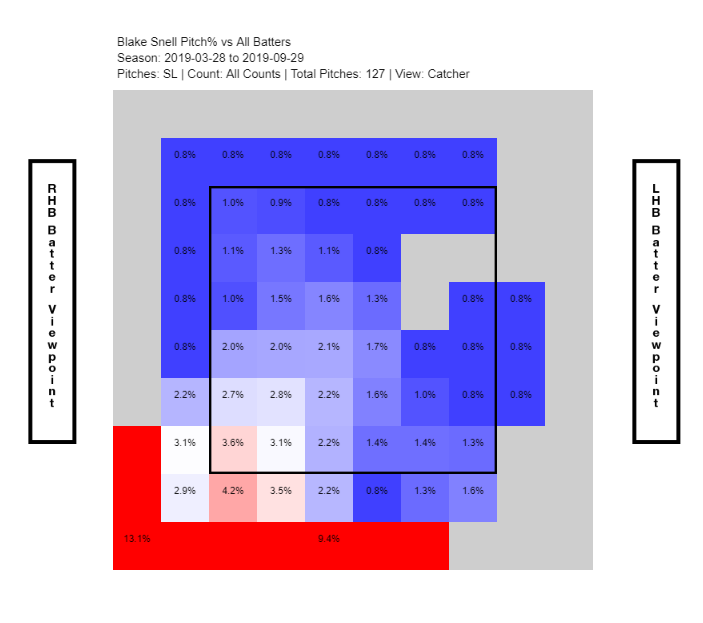 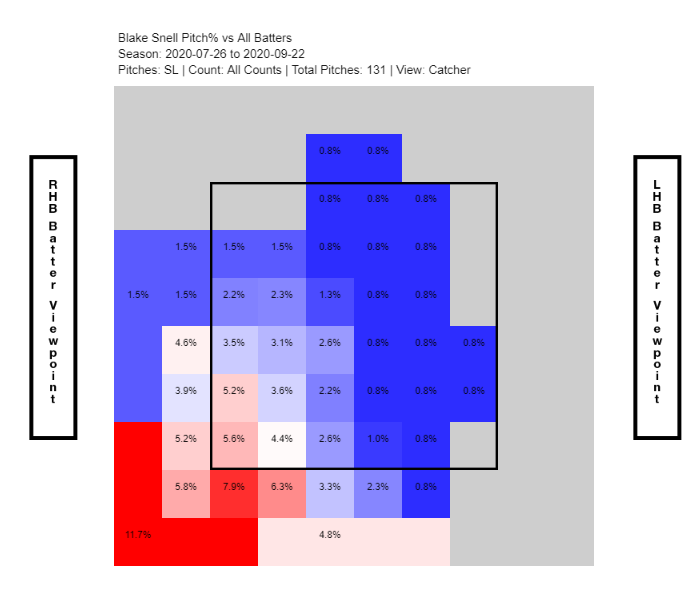 Pitching down and in on righties with a lefty’s slider is as textbook as it gets, but it’s been effective for Snell, especially when paired with his changeup, thrown exactly as hard but breaking down and away from right handed hitters. All of this happens at the same time as Snell breaks out his best pitch, a backbreaking curve ball:

A funny thing happens when Snell faces the Yankees, though. He’s matched up against New York more than any other opponent, and the Yankees hit him about 20% better than his career average, by tOPS+. What does Snell do different that exposes him to the Yankees?

To start with, he almost stops throwing sliders entirely. Over the last two years, the slider hasn’t even been a show-me pitch to the Yankees—in fact, in his August 7th start against the team, Snell threw 59 pitches and just a single slider, which was fouled off. This is particularly notable because of that above table. Snell throws more sliders now than ever before in his career, yet even in this new repertoire 2020, he doesn’t want to test Yankee hitters with it. He’s trying new things, but not trying them against the Yankees, so it’s hard to imagine he’ll try it now in the biggest start of the season.

This then becomes a big part of the Yankee game-plan for Monday night. All the indicators are that the Yankees don’t really have to worry about his slider, and if Snell isn’t comfortable throwing his slider, the Yankees aren’t going to see much inside pitching at all, especially when you factor in that the lineup Monday could very well see nine right-handed hitters facing Snell:

Without his slider, Snell just doesn’t have an inside offering for the Yankees, which means the team can focus on feasting on those middle-up pitches, which just so happens to be exactly where Snell throws his fastball:

So what do we take away from all this? Snell is a really good pitcher, except when you can take away his slider and focus on the fastball up. Eight of the ten home runs Snell has given up this year have come on his fastballs. All but one of those fastballs were above the belt. Of the 18 runs Snell has surrendered this year, 13 came on home runs. What do you know, the Yankees hit high fastballs out of the park.

Blake Snell doesn’t really do anything unconventional; he pitches like a textbook—fastballs early, breaking balls late. The Yankees can likely eliminate one of Snell’s breaking balls based on past behavior, and then the team’s game-plan becomes textbook too: if it’s high, let it fly. Jump on fastballs early in the count, when they’ll be right in the Yankee hitters’ wheelhouse, and hit them over the fence. When has that worked before in the postseason?