J.A. Happ has found a different approach for the Yankees

A tweak against right-handed hitters has helped the veteran southpaw in September.

Share All sharing options for: J.A. Happ has found a different approach for the Yankees

As we head into the postseason, we have a clearer understanding of how the Yankees might deploy their starting rotation come October. With James Paxton becoming one of the best pitchers in the American League over the last two months and Luis Severino returning to the rotation, a 1-2 potent punch has formed. Masahiro Tanaka lines up for the third game with a history of showing up for the Yankees in postseason games. The remaining worry has been who will handle the bulk of a potential fourth game, and over the last month J.A. Happ, has helped answer that question.

Happ took the mound on September 1st against the Oakland Athletics, and ever since then has produced a 1.65 ERA, 3.11 FIP, and 9.2 K/9. The biggest difference in Happ’s September has been a ten-percent increase of his four-seam fastball usage and ten-percent decrease of his sinking-fastball usage. At first, you might question this decision, because the sinking fastball has long been one of the veteran’s stronger offerings. Nevertheless, Happ has thrown his four-seam fastball more often, but what’s important to mention is where he’s locating the fastball compared to the first five months of the season. 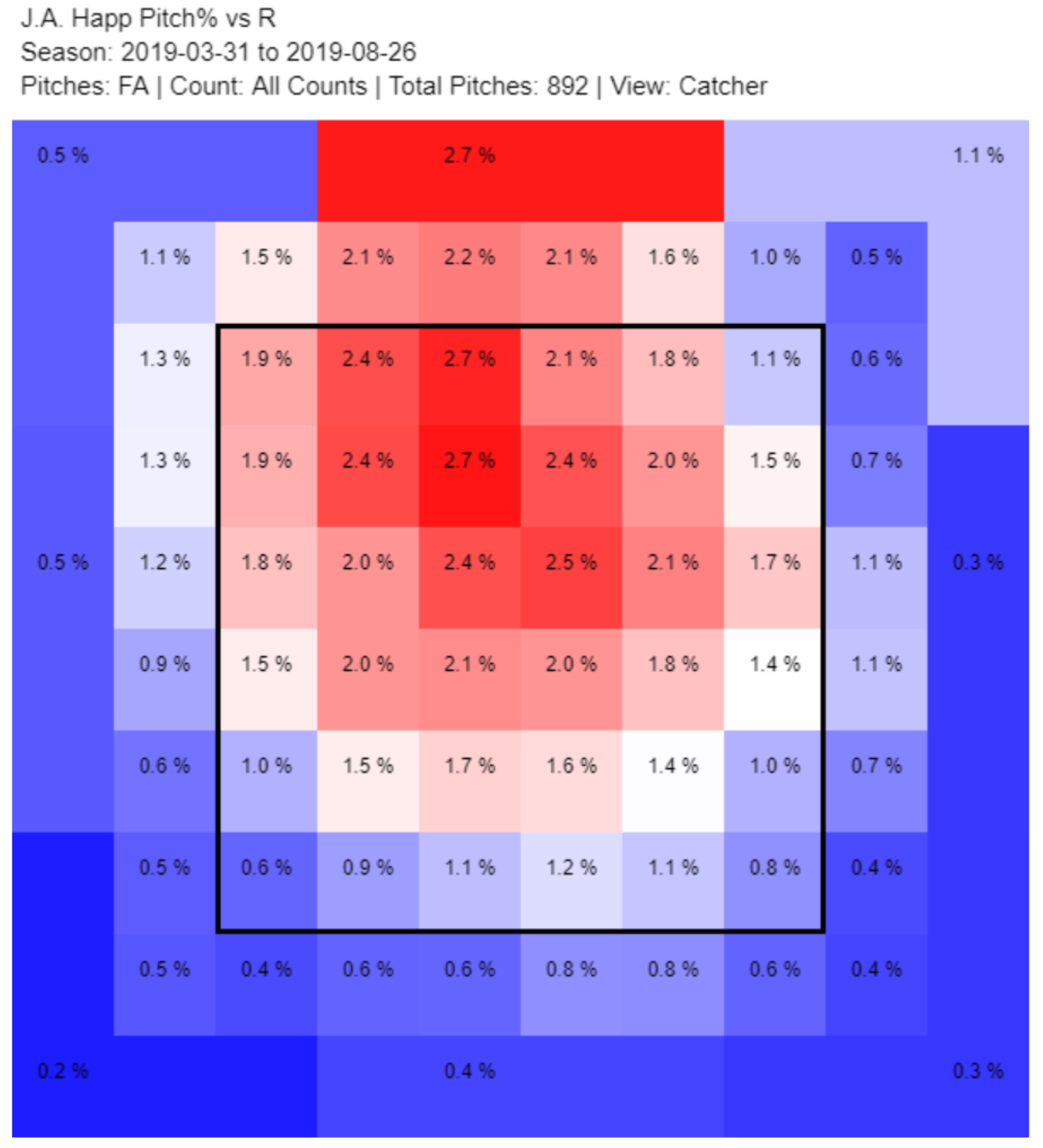 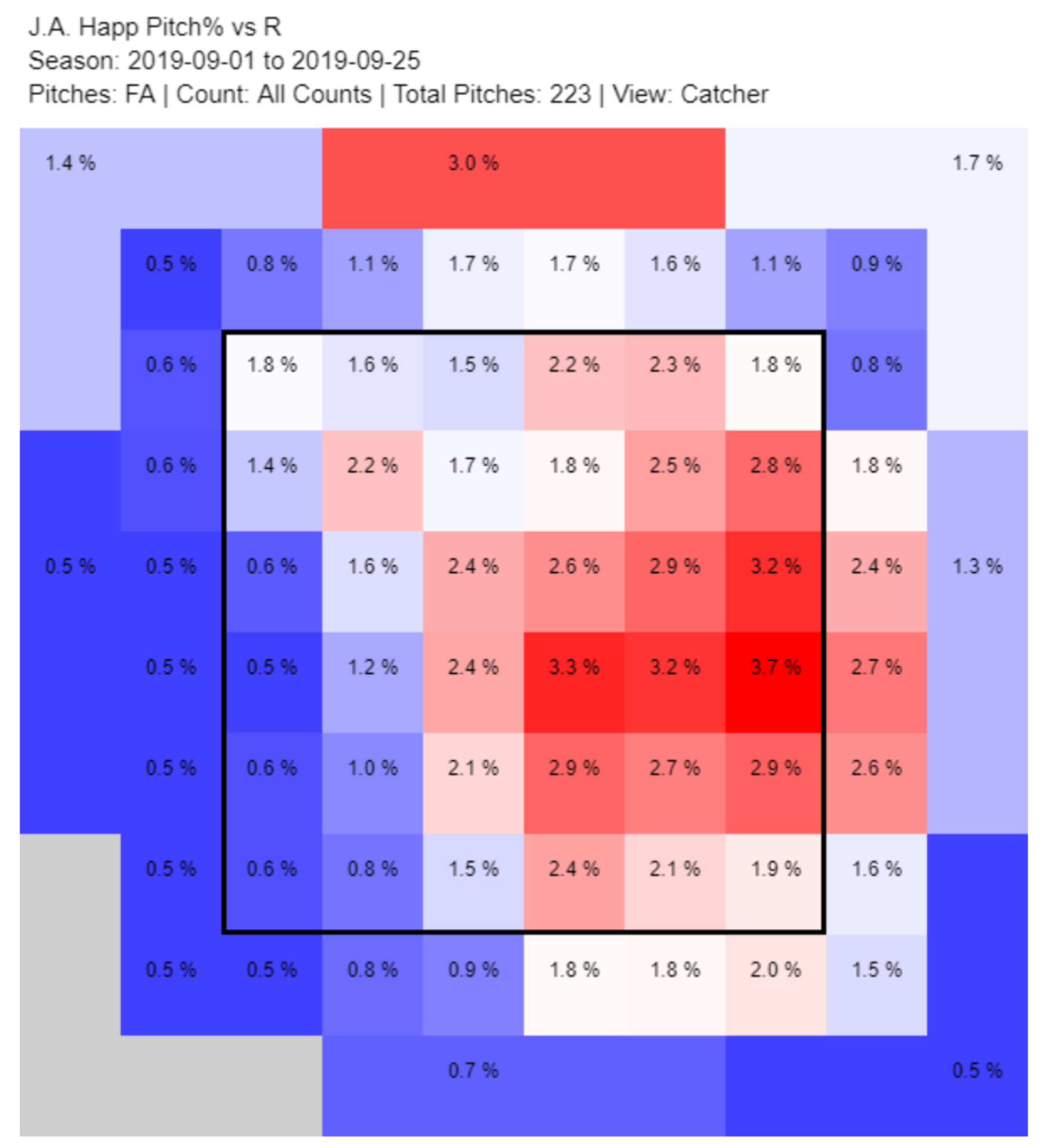 The higher frequency of four-seam fastballs and change in location have helped Happ in multiple areas of the game. Home runs have been an issue for him this season, but during this month he has allowed just two of his 34 homers on the season. Considering he allowed eight home runs in August in the same amount of starts, that’s a marked improvement. Secondly, both his batting average allowed and his expected batting average against have improved over the past month. Coming into September, Happ produced a .254 batting average, and .242 expected batting average against, while those figures have improved to a .182 and .215 this month, respectively.

Overall, it’s not that hitters are hitting Happ softer. His fastball is actually getting hit harder, about four mph faster than before, from an average of 91.7 to 95.4. But two changes help cancel out this increase; launch angle and whiff rate. During September, Happ has lowered his average launch angle against the fastball from 27.4 to 20.3, helping lower his HR/FB rate from 20.3% to 7.1%. When it comes to swings and misses, the difference has been just as impressive. Over the first five months, hitters swung at 513 fastballs thrown by Happ and 117 missed, for a 22.8% whiff rate according to Statcast. In September that rate has jumped to 34.3%.

Even though batters are hitting Happ harder, they are now making less contact on his fastballs and not lifting it for home runs. Combined with a sinking fastball that was already working for him this season, and his success against left-handed hitters, Happ may have found the fix that could help the Yankees get a win in the postseason with him in the box score. One good month doesn’t mean he is going to continue his 1.65 September ERA, especially with the much improved lineups the postseason will have in store, but it’s a step in the right direction. Last season, Happ came over from the Blue Jays and played excellently during the regular season, and then faltered in the postseason. This season, we’ll hope he flips the script.