His discipline is only getting better.

The trade deadline is finally behind us and the results did not come to the liking of many New York Yankees fans. Clint Frazier and Miguel Andujar were rumored to be possible trade pieces, but they will remain in pinstripes for the time being. Combined with Domingo German and Gleyber Torres, the Bombers have a stock pile of young, major-league ready talent.

German has been the the most improved Yankee this season, going from a fifth starter to the brightest spot in the rotation. Meanwhile, Gleyber Torres has built upon his All-Star rookie season. His improvements might not be as glaring as German’s, but the truth is Torres is finding a way to produce more in 2019 and it has to do with his plate discipline.

Considering Gleyber Torres is 22-years old and won’t be a free agent until 2025, he is currently one of the most valuable assets the Yankees have in their organization. It has been impressive to see the possible future shortstop improve his plate discipline at such a young age. Let’s take a closer look at how he has been doing it.

Many of his statistics from last season are fairly similar. The change I want to focus on is his difference in walk and strikeout rates because it leads to the different approach we’ve seen from Torres. When first trying to figure out the drop in strikeouts, I looked at his contact and swinging strike percentages to see the differences, and both have improved. Then, finding out exactly what pitches Torres is having better contact against caught my interest. 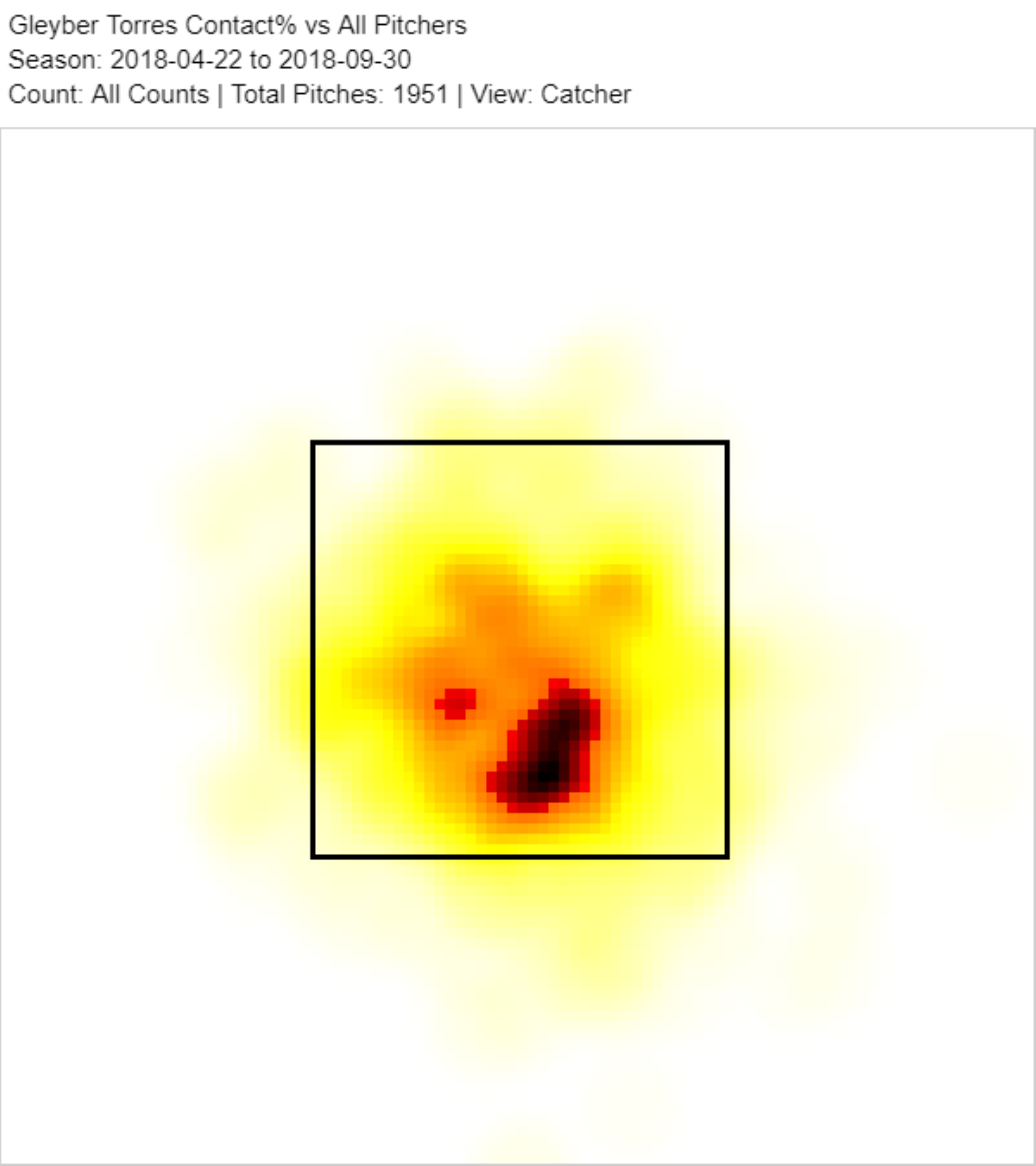 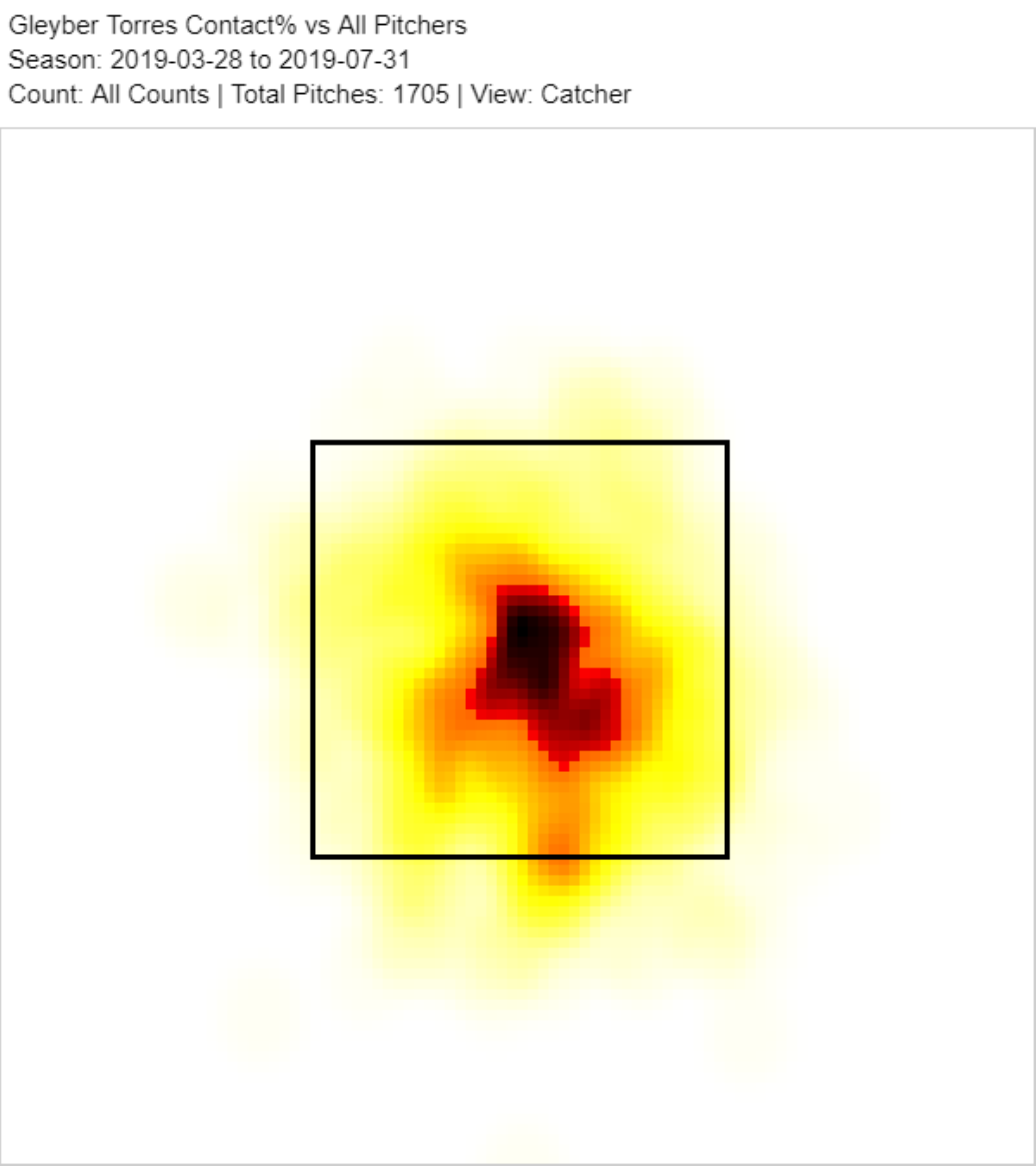 Torres has started to find better success with pitches in the middle of the plate compared to last season, helping raise his contact percentage from 70.9% to 75.1% per FanGraphs. But, the biggest difference for Torres is he is now swinging at pitches in the zone about seven percent more often than last season according to FanGraphs and about five percent more often according to Statcast. In contrast, Torres is no longer taking as many strikes looking— he’s either putting these pitches in play or fouling them off. Torres has lowered his strikes looking percentage from 24.0% during his rookie year to 19.5% this season according to Baseball Reference. Additionally, his foul ball strike percentage has also seen an increase, from 26.8% last year to 32.3% this season.

What’s even more interesting is Torres’ strikeouts looking percentage compared to last season—the two numbers are very similar which means he is actually taking the same amount of pitches with two strikes compared to last season. Therefore, the approach Torres has made to swing at more pitches has come earlier in the count rather than later. 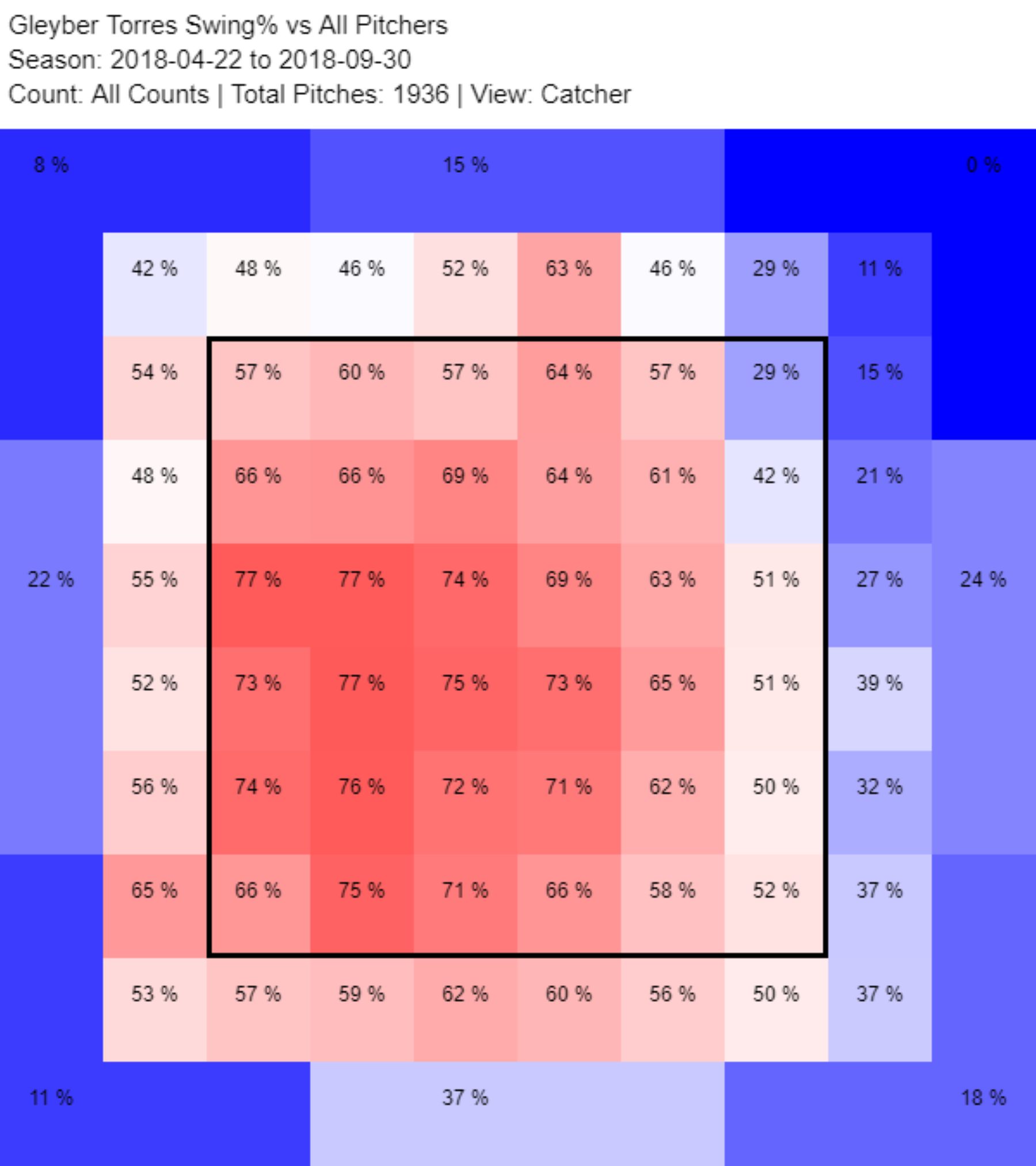 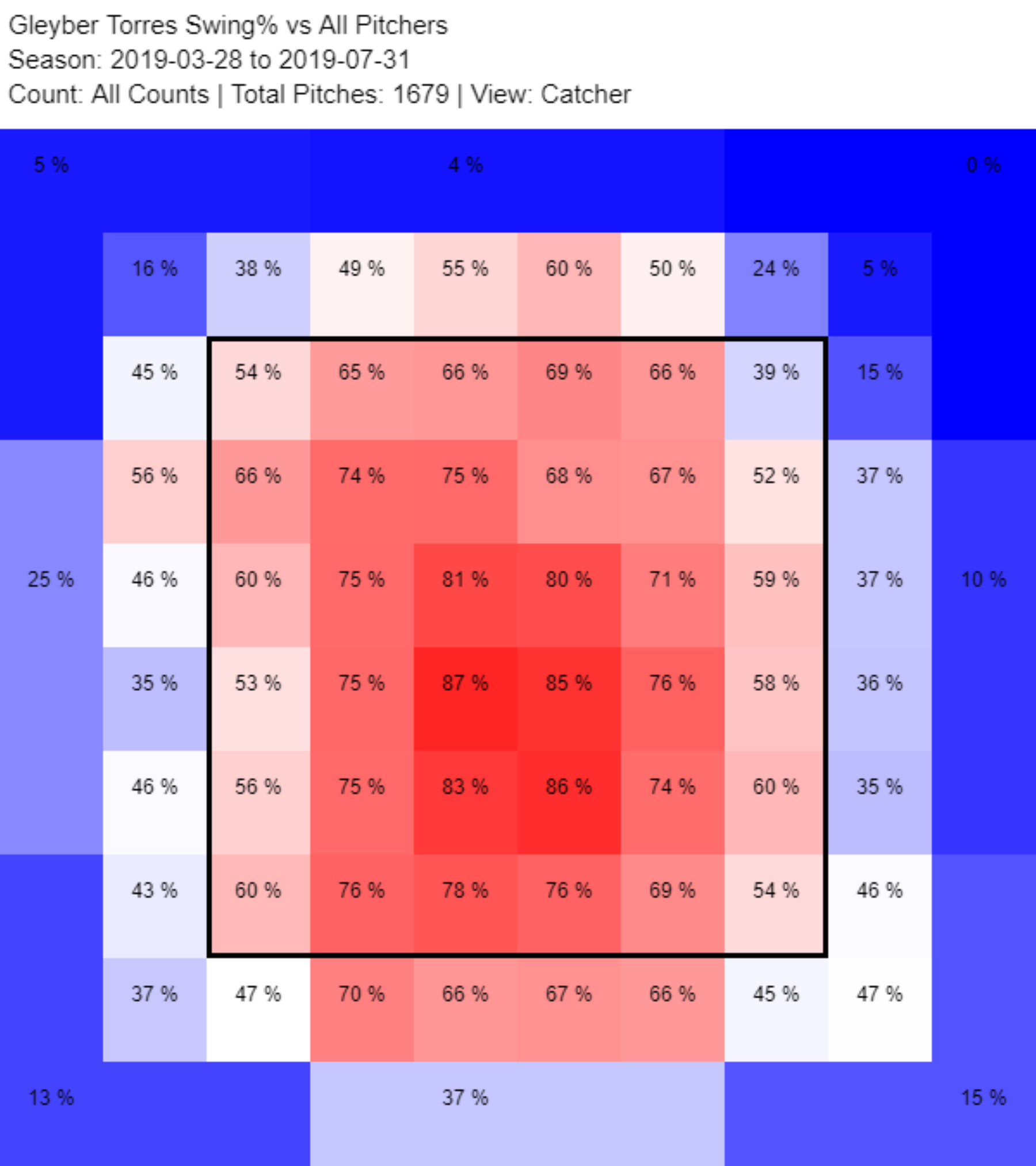 We have seen Torres not only increase his contact percentage and the frequency in which he is swinging at pitches, but now we get to see exactly where Torres is looking to swing at pitches. His target has shifted more towards the middle of the plate coexisting with where he has been able to finding more contact. Torres has started to recognize he is finding more success in this area, while so far the biggest beneficiary has been his on-base percentage seeing an increase from .340 to .354. His power numbers haven’t been effected yet by this change, but the truth is Torres is still very young and has plenty of time to improve his already impressive power numbers.

Overall, it’s good to see that in just his second season Torres is finding ways to become better. We have now seen a pattern of him choosing to swing at pitches either towards the inside or middle part of the plate, and staying away from the outer third. Additionally, he has increased his aggression against pitches in the zone, while slightly lowering the rate at which he is swinging at pitches out side of the zone, per FanGraphs.

Recognition of the plate is one of the most important aspects of baseball, and for Torres, moving his sights has helped him in multiples way. The Yankees may have disappointed at the trade deadline, but there are still plenty of reasons to be excited about the team. Gleyber Torres is just one of them.