Brain Cashman has done it again, Mike Tauchman is just the latest in a long line of major-league hitters unveiling their full potential in the Bronx. Didi Gregorius and Aaron Hicks were the first two, then came Luke Voit and Gio Ursehla, now Tauchman joins the club.

With Giancarlo Stanton on the injured list and Clint Frazier currently in Scranton working on his defense, the rookie Tauchman has taken full advantage of consistent playing time, an opportunity not presented to him by the Colorado Rockies. Over the two previous seasons, the Rockies used Tauchman as a bench player, accumulating over three plate appearances in a game just nine times. Fortunately for the Yankees, Tauchman was up for grabs towards the end of spring training, coming at the cost of Phillip Diehl, who has thrown a total of two innings for Colorado this season.

Tauchman wasn’t the most impressive replacement during his first stint with the Yankees, hitting for a wRC+ of 88 over 108 plate appearances. His strikeout rate was high at 30.6%, and a groundball rate of about 55% left much to be desired.

The outfielder did, however, show some encouraging signs in other categories. Take laying off pitches outside the zone for example. He currently leads all Yankees with the lowest O-swing percentage. He did damage when he did loft the ball, with a 20% HR/FB rate helping him produce an Isolated Power mark of .200, even with the strikeouts and groundballs. Tauchman had obvious pop, but he needed to stop striking out and elevate the ball more.

All of a sudden, however, Tauchman started producing, improving on two of his weaknesses earlier in the season. The biggest difference in Tauchman’s game since his return is the frequency in which he is hitting line drives. Over the two stints, Tauchman has been able to raise his line-drive percentage from 12.9 to 29.4. Additionally, even though his fly-ball percentage rose by a margin, Tauchman started hitting 33.3 percent of fly balls for home runs compared to the 20.0 percent of earlier. 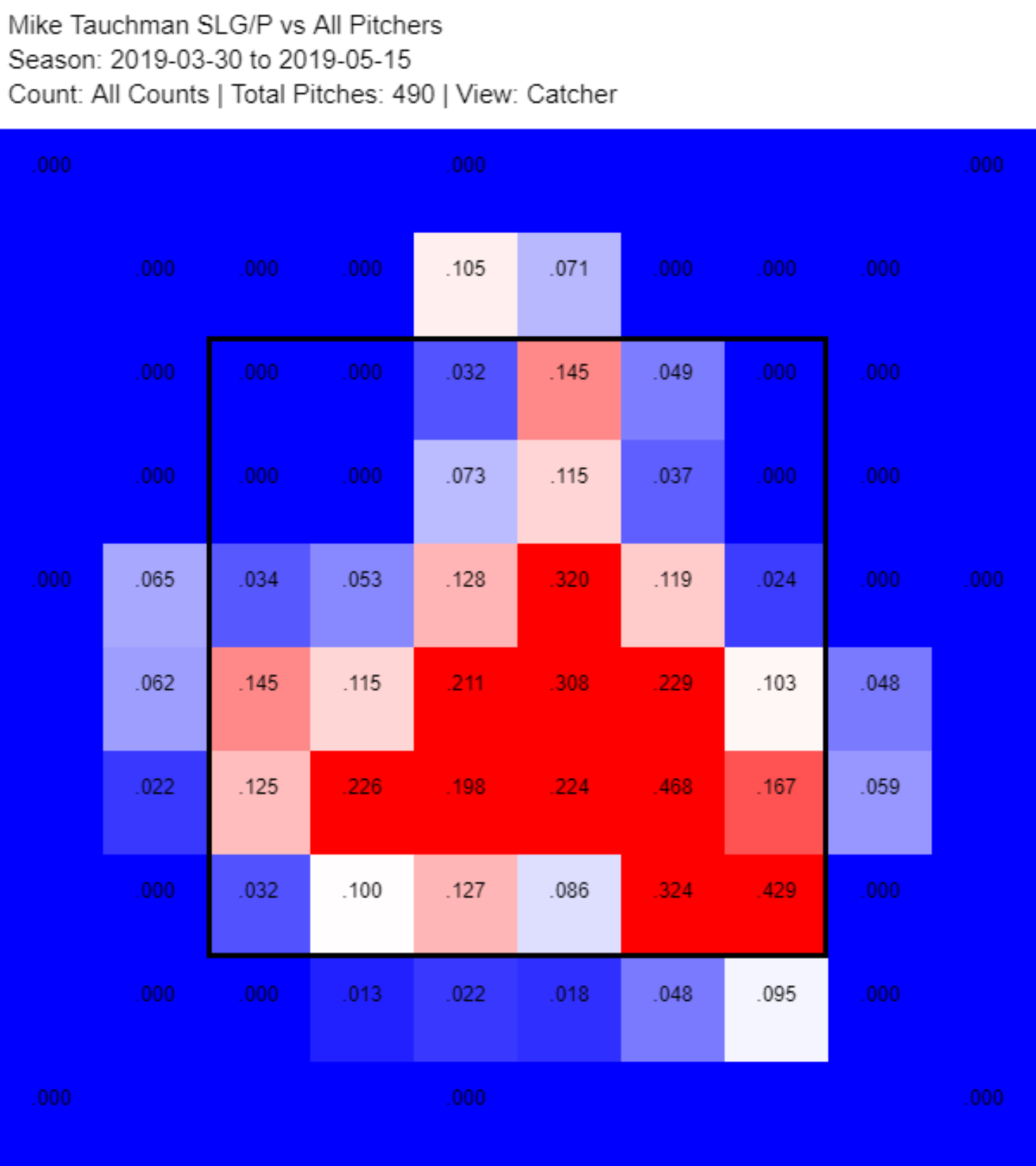 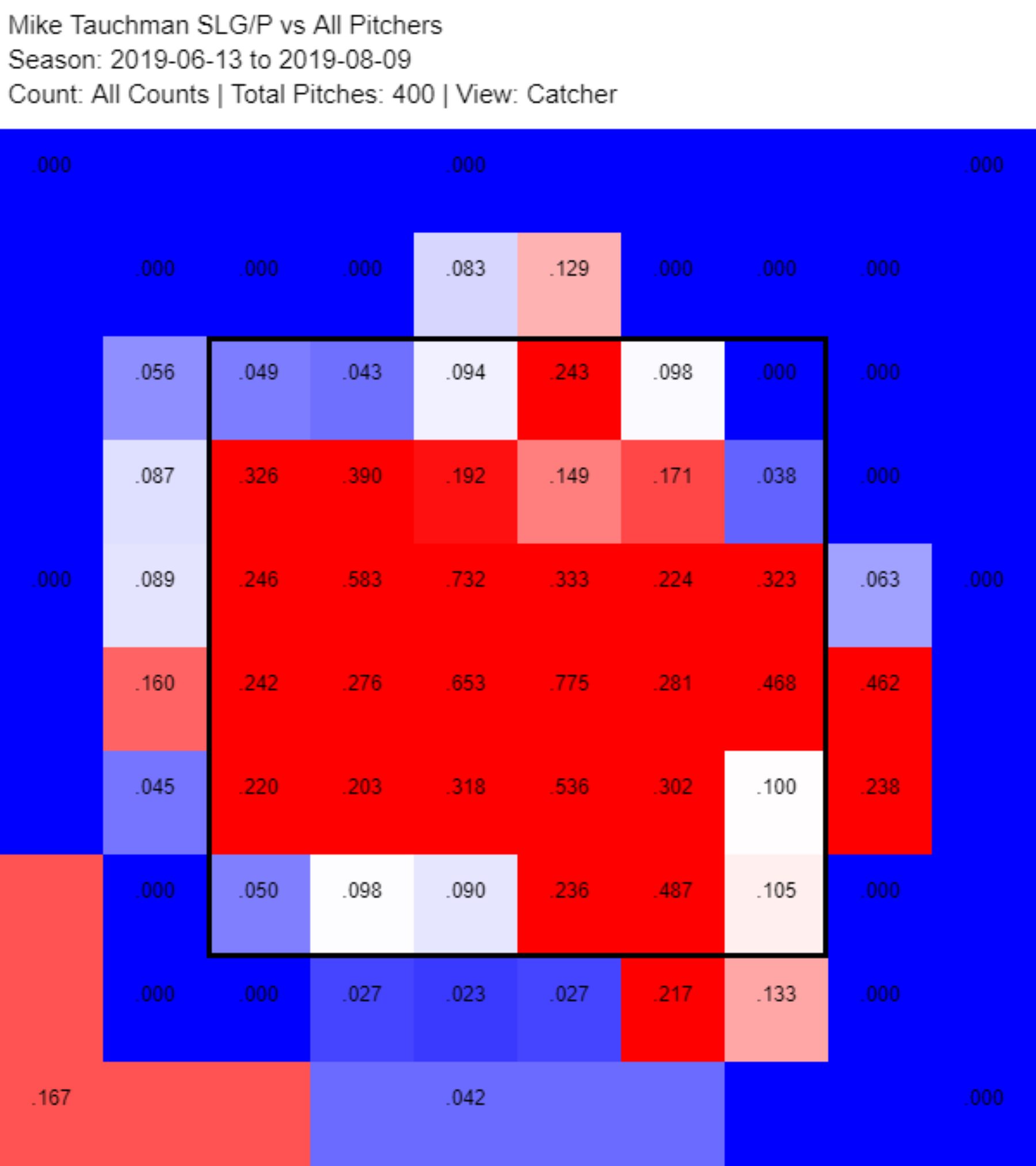 Since June 13th, Tauchman has hit 25 line drives and 24 groundballs, compared to his first 108 plate appearances when he hit 11 and 34, respectively. This underlines Tauchman’s major change. Considering he is hitting line drives for a batting average of .800 and a slugging percentage of 1.440 since his return, it’s easier to understand how he has raised his production through the zone. The upper portion of the plate wasn’t an area Tauchman was taking advantage of earlier in the season, but now has been able to because of his success against fastballs.

As Yankees fans we can no longer be surprised when a hitter comes to Bronx and figures it out because it’s now become the norm. If someone is added next season and doesn’t produce, they’ll be look at as the exception not the rule. When Brain Cashman asks for a hitter, other general managers must wonder what it is he sees in them that they don’t.

Nevertheless, Tauchman has been nothing but exceptional for the Yankees while Stanton has been on the injured list. Originally just a depth piece, with each passing day Tauchman is making a case to become a legitimate starter.