The Yankees need to find a way to control home runs

Yes, the ball is juiced, but the rotation is getting killed by the long ball.

Share All sharing options for: The Yankees need to find a way to control home runs

It’s a juiced ball year, home runs are way up, and the Yankees play in a division full of hitters parks. With all those caveats out of the way, it’s time to address the very real struggles the Yankee rotation has had with home runs.

New York starters currently have the second-highest HR/9 rate in the majors, behind only the possibly historically-bad rotation down in Baltimore. Yes, the ball is juiced and yes the Yankees play in a hitter-friendly division, but so does Boston, Tampa and Toronto, who have all managed the long ball more effectively than the Yankees. Houston, Minnesota, and Cleveland, top AL playoff rivals, also have to deal with the juiced balls. The Yankees in particular are making it harder on themselves by surrendering so many dingers.

There are two other scary things about this home run trend, and it’s that there’s no one real culprit, and the rate of long balls is only increasing as the season wears on:

Every Yankee starter is getting rocked more with each month, and there’s not a single starter who has a below-average HR rate. It’s a team-wide crisis, and it’s presenting a major problem on multiple fronts.

Complicating factors is the fact that the Yankees are merely solid in K-BB% - ninth overall in baseball - and WHIP, meaning the starters are allowing some traffic on the basepaths, and 40% of all the home runs the starting staff gives up come with men on, when the league averages right around 35-36%.

Aside from just costing the Yankees wins, the home run trend is worrisome as we look toward October. We know that the Yankees are going to be in the playoffs, and we know that home runs hurt you more in the playoffs. If New York can’t work out a way to keep the ball in the park, it becomes the team’s most glaring weakness when matching up against the better offenses in the American League.

I wish that I had one clear-cut solution for the rotation. My first thought was that pitch location was off in some consistent, trending manner. But if you look at the two worst HR rates in July, Tanaka and CC Sabathia, that doesn’t really hold up: 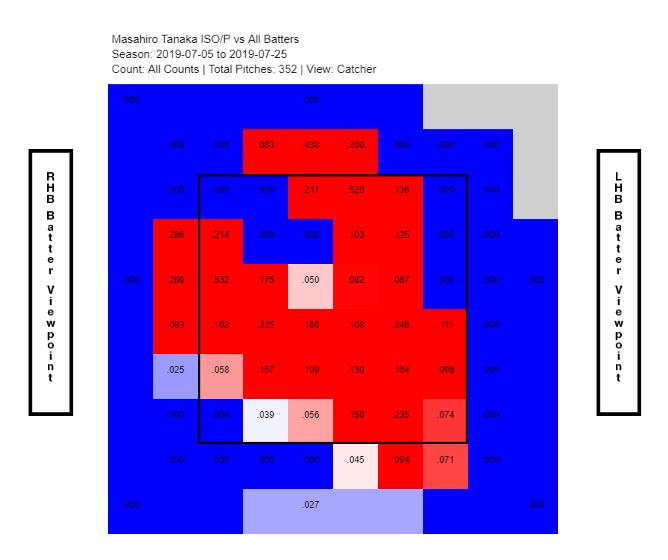 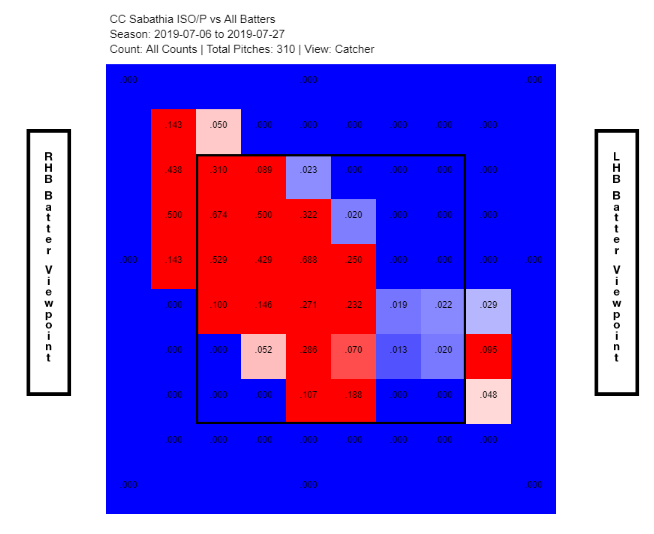 There’s nothing really in common with location, other than pitches over the plate are getting crushed, which...yeah, duh.

I don’t know what the solution is, but I know what the problem is. The Yankees deciding not to add any starters at the deadline underline that these five pitchers have to find a way to keep the ball in the yard come October. Going up against lineups like Minnesota and Houston is tough enough without watching every pitch through your fingers.