Who is the real Gio Urshela?

The evidence continues to point towards Urshela being for real.

Share All sharing options for: Who is the real Gio Urshela?

Gio Urshela re-entered the spotlight over the last few days. On Sunday he drove in a couple of runs, put on his usual defensive clinic at third base, and made one acrobatic slide to beat a play at the plate. Last night, he swatted a game-tying dinger against the Rays. His performances turned into a discussion point in the locker room. “We wouldn’t be in first place without Gio,” Aaron Judge explained to Bryan Hoch on Sunday.

Judge’s comment is obviously teammate talk. Urhsela has been a one-win player this season, and the Yankees have a five-game lead over the Rays. They would, in all likelihood, still sit atop the division without him. That said, his performance deserves credit. For context, his best batting comps according to Statcast include Whit Merrifield and Jeff McNeil. Imagine hearing that two years ago, back when he managed a 41 wRC+ with Cleveland.

Such a stark contrast would lead one to believe we’re talking about two entirely different players. This dichotomy then begs the question, who is the real Urshela? What is his actual baseline? Is he the 115 wRC+ batter that has become a mainstay in the Yankees’ lineup? Or is he playing far above his head?

If that didn’t give you whiplash already, consider that breakdown in graphical form. The chart best illustrates the highs and lows of Urshela’s season. Keep in mind that 100 represents league average when it comes to wRC+.

The graph says a few things. First, Urshela put on a Judge-like performance for the first 30 games. Then he came crashing back down to Earth. That makes sense; regression set in. The most interesting part, however, is how he didn’t crater. Urshela fell into a slump and then pulled himself out. That’s key, and it bodes well for his future.

A close examination of his slump indicates that it was induced by a temporary lack of plate discipline. He began to chase at balls out of the zone at a higher clip than normal, and as a result, the strikeouts piled up. Note the strong correlation between his K% and O-Swing% in the below charts. 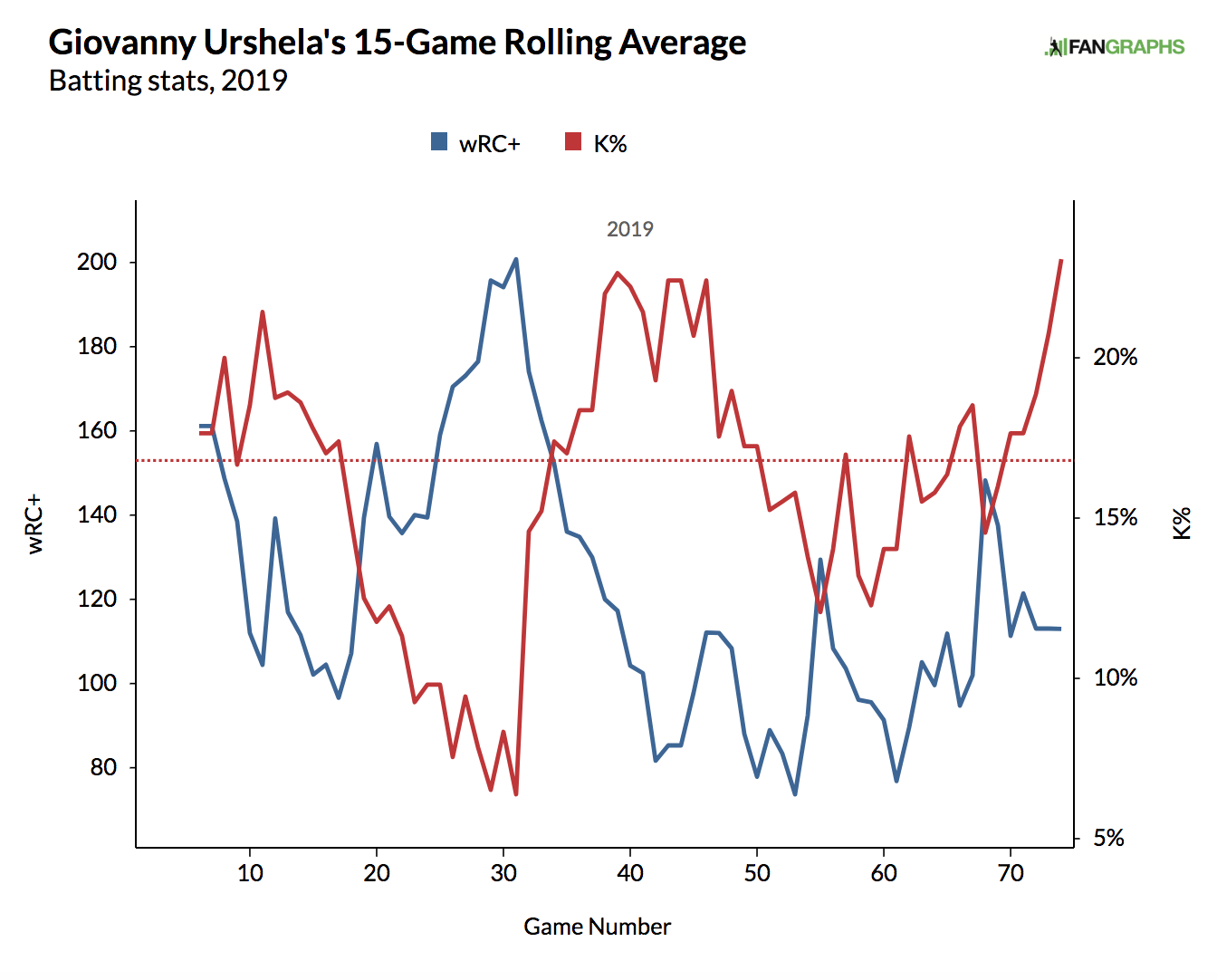 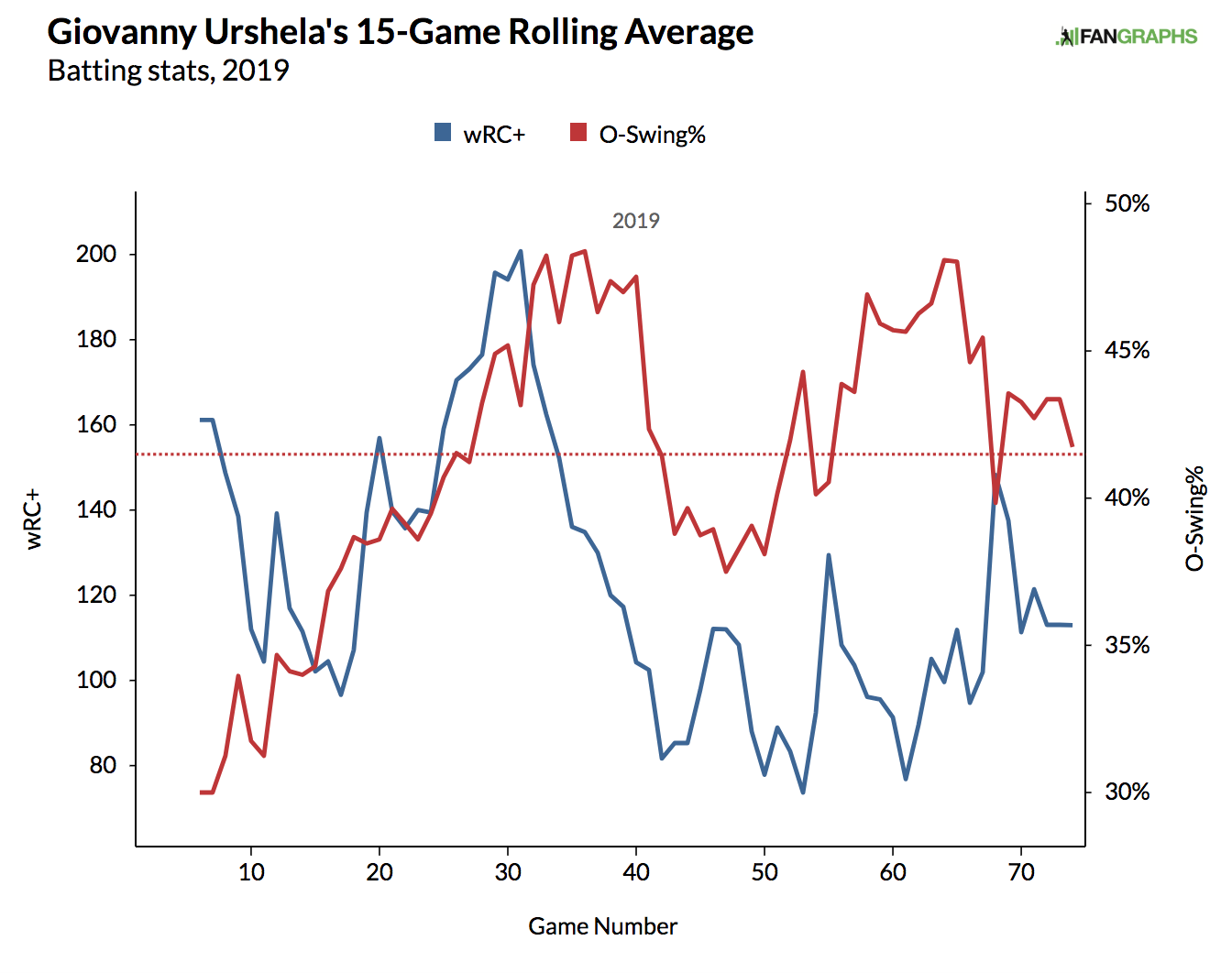 Swings in plate discipline shouldn’t concern the Yankees all that much. A player’s approach can ebb and flow over the course of a season. It happens all the time. A batter gets caught in between, expands the zone, and soon finds himself in a slump. That’s perfectly natural over the course of a long season.

In fact, the Yankees should take some comfort in one particular aspect of Urshela’s slump. All the while, he still crushed the ball. His hard-contact numbers remained constant while his performance dipped.

It’s fallen off a little of late, and that’s worth keeping an eye on. But the important piece here is that the adjustments Urshela made since joining the Yankees appear to have stuck. Mike Petriello examined them at length a few months ago. Essentially, Urshela lowered his hands, opened his stance, involved his legs more in his swing, and voila. He began to hit the ball harder. The 27-year-old now has an average exit velocity of 90.2 mph in 2019—71st percentile stuff. His previous career high came in at 87 mph, set back in both 2015 and 2017.

So, who is the real Gio Urshela? He’s not the elite batter on display earlier this year, but he also isn’t the replacement-level player many considered him to be entering the season. His adjustments appear for real, and they raised his floor considerably. His preseason OPS according to Steamer clocked in at .667. That has climbed to .717 at the midway point, the largest jump of any player who started the season with the Yankees (Edwin Encarnacion got a boost moving to Yankee Stadium.) For further context, Gleyber Torres and DJ LeMahieu saw their OPS projections jump by 29 and 27 points respectively.

Urshela’s not getting by on smoke and mirrors; he’s scorching the ball. He isn’t a black hole at the plate anymore. He probably will settle in as a roughly league-average bat, with standout defense across the infield. That’s a nifty little player, and more than the Yankees bargained for when they picked him up off waivers last August.