James Paxton is a rising success story for the Yankees

Paxton’s success is proportionate to the rise on his fastball

Share All sharing options for: James Paxton is a rising success story for the Yankees

When the Yankees acquired James Paxton from the Seattle Mariners last November, they added a left-handed ace. Since 2017, Paxton has put up elite starting pitching numbers, including an eye-popping 11.14 strikeout per nine inning rate.

His ability to dominate was on full display in Toronto last season when he threw a no-hitter against the Blue Jays. It also showed up earlier this season, when Paxton threw a total of 14 innings, striking out 24, surrendering zero runs, and allowing just five hits over two starts in April.

The second outing after those performances, however, he needed to walk off the field. According to Paxton, he had been feeling discomfort in his left knee during his previous starts, but was still able to continue through it. During his outing on May 3, however, Paxton was no longer able to bear the pain.

Paxton returned after missing a little less than four weeks, and even though his numbers aren’t showing the result they did in April, he has trends that suggest he can pitch like that soon.

The left-hander’s arsenal depends heavily on a fourseam fastball thrown 63.5% of the time, combined with a cut fastball and a knuckle-curve as his secondary pitches. Both produce a whiff percentage of about 39% according to Statcast. With the success of his high whiff rates, Paxton currently ranks 12th in swinging-strike percentage against among all starters with more than 50 innings pitched this season.

Paxton before injury, during dominance, after injury Statcast

The trends all start off with his fourseam fastball. Throughout the season, Paxton has been consistent with his arsenal usage, never straying too far away from his overall season usage percentages. What did change, however, when Paxton experienced his high level of success was his ability to throw high fourseam fastballs. This allowed his secondary pitches to work on the lower half of the plate. 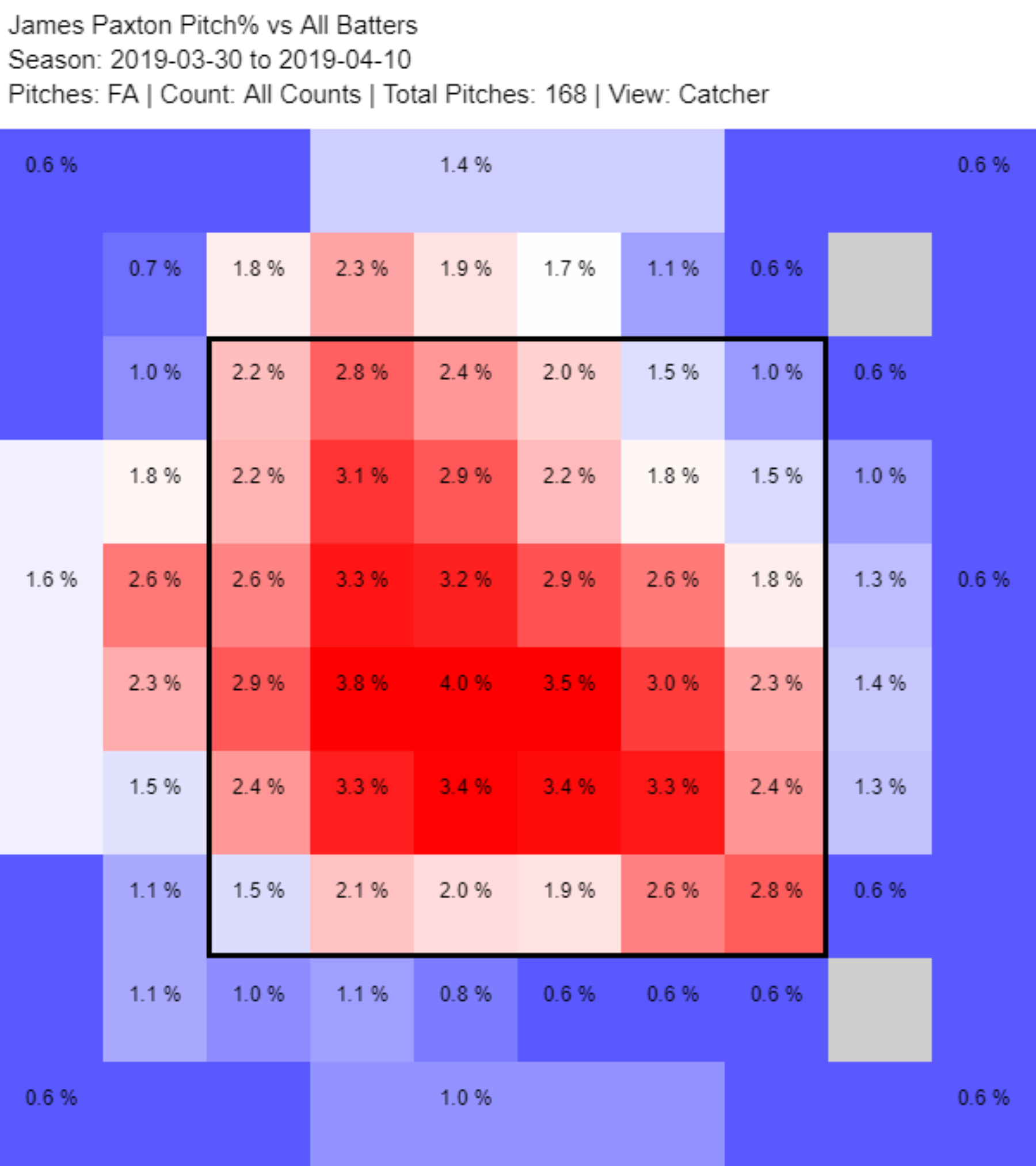 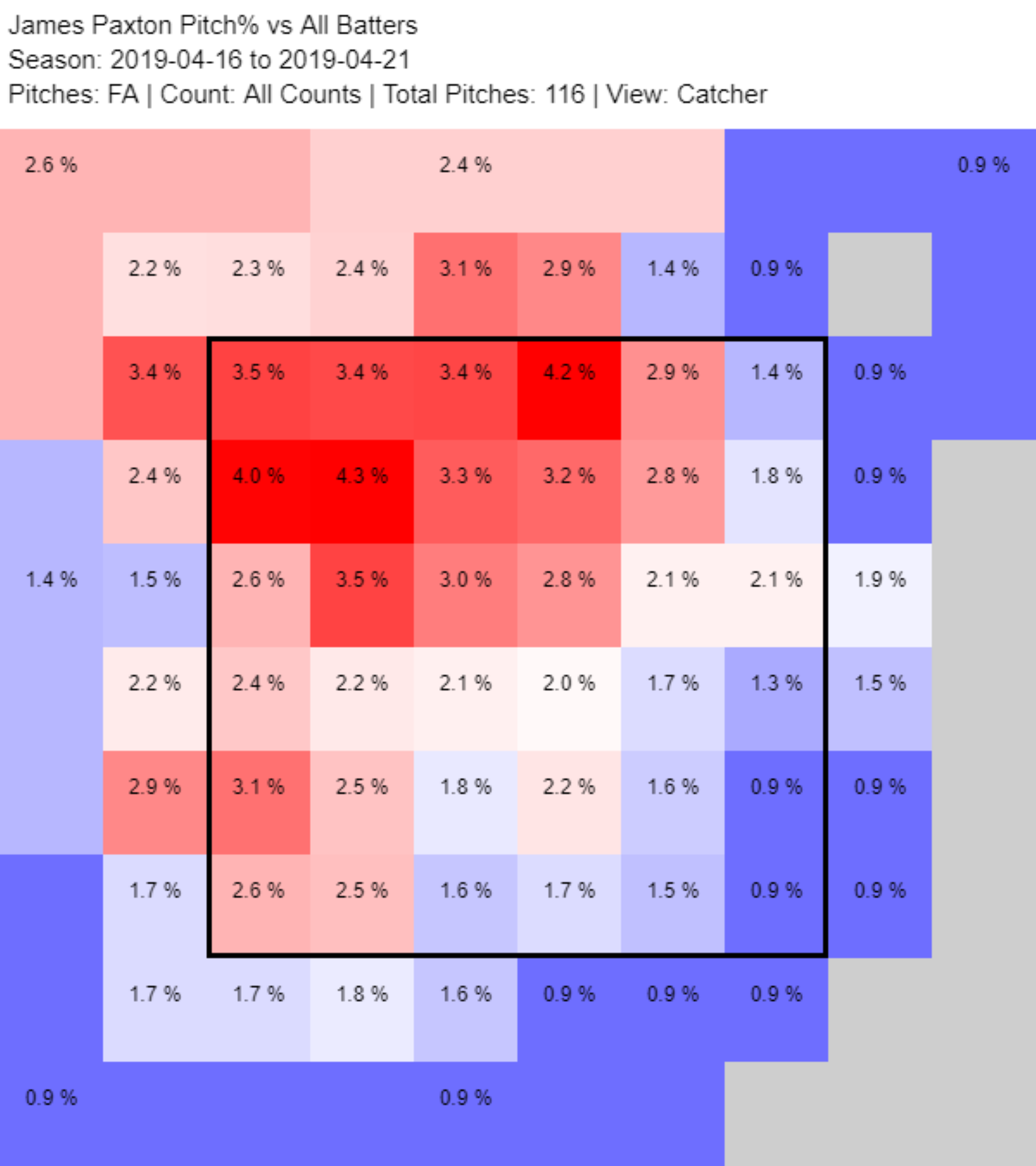 According to Statcast, Paxton’s expected batting average during his two-start stretch against Boston and Kansas City was .152, compared to a .269 mark for the rest of his starts. Interesting enough, his fourseam swing-and-miss rate before his early success and during were exactly the same at about 13%. What changed heavily, though, were his swing-and-miss percentages for his secondaries.

With Paxton returning and having almost a month of performances under his belt, I wanted to see if he has been getting closer to controlling his fastball to the upper half of the plate. His first two starts did show him leaving some towards the bottom half, but in the three starts after, he has greatly improved his command. The left-hander soon might be able to see his secondaries pitches become more effective as his fastball lays down the ground work. 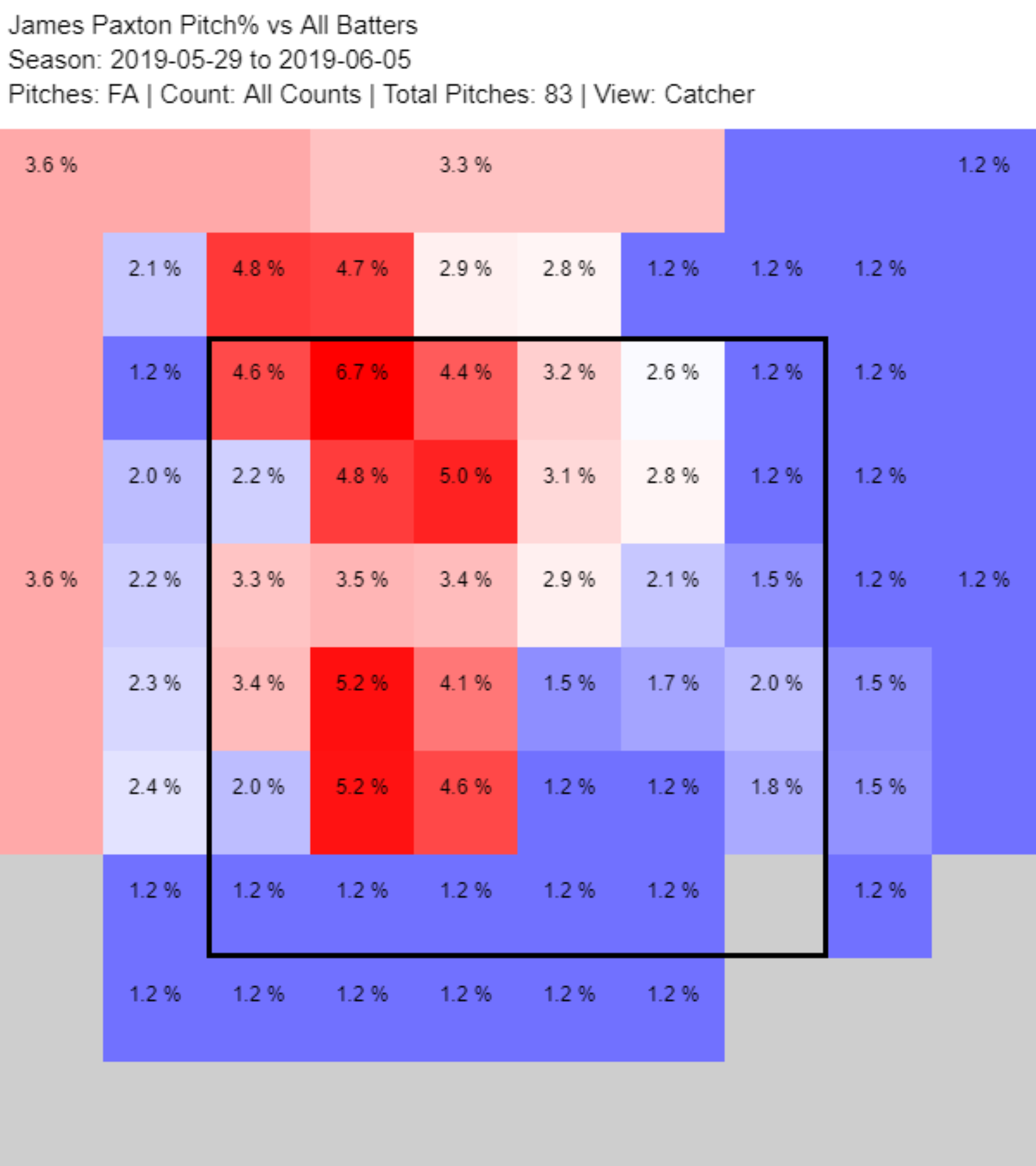 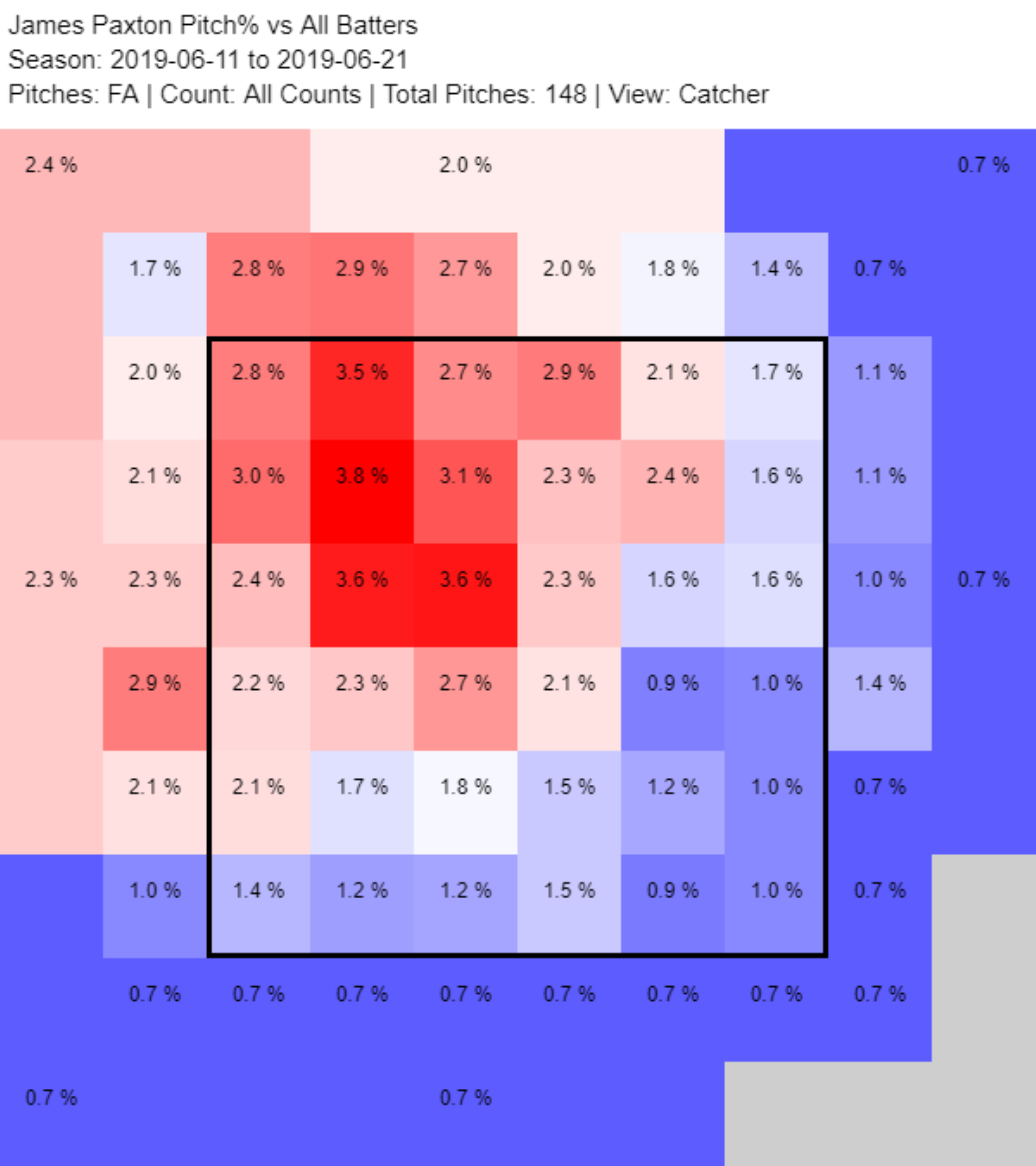 Yesterday Paxton did just that, as one can see in a short clip put up by MLB.com. He produced strikeouts with the high fastball, as well with his low cutter and knuckle-curve. On Statcast one can see the changes in velocity between the pitches, but in the video it seems to stand out even more. Throwing a 96 mph fourseam fastball, followed by an 82 mph knuckle-curve or a 90 mph cutter to the back leg, can be highly effective.

Five innings against the Houston Astros isn’t eight innings of shutout ball against the Red Sox, but it’s encouraging seeing him get closer to what he was able to do earlier. Paxton was added to be a huge part of this rotation, essentially the second ace behind Luis Severino. There remains a lot of season to play out, but success has a blueprint, and and it’s up to him to build upon it.