J.A. Happ and the A is for Adjustment

Tweaks in Happ’s game-to-game pitching repertoire appear to be the key to the lefty’s recent rebound.

Share All sharing options for: J.A. Happ and the A is for Adjustment

I wrote earlier this week about CC Sabathia and James Paxton, so why not round out a week’s worth of posts with the last left-hander in the Yankees’ rotation, Mr. J.A. Happ?Fortunately, like Paxton, Happ’s coming off a strong start on Friday where he held the Boston Red Sox to one run over five innings, and led the team to a series-opening win.

Happ’s last two starts have been a welcome respite from what’s been an ugly beginning to 2019. He’s given up four runs over 11 innings against the Royals and Red Sox, but all those runs came on two home runs. He’s given up just seven hits and two walks while striking out 15 over that span, so while Happ is still dealing with a real home run problem, everything else looks like it’s come around.

What’s really noteworthy about this turnaround is the game-to-game adjustments Happ has made: 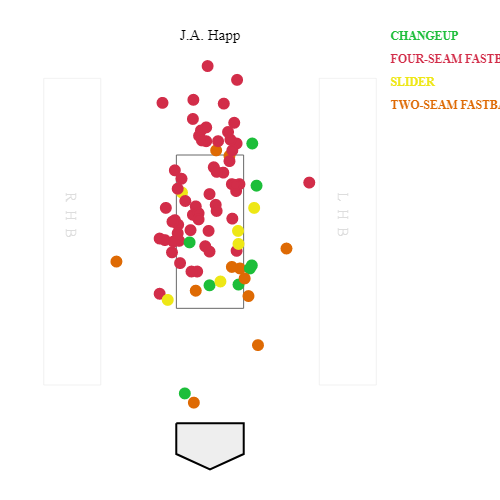 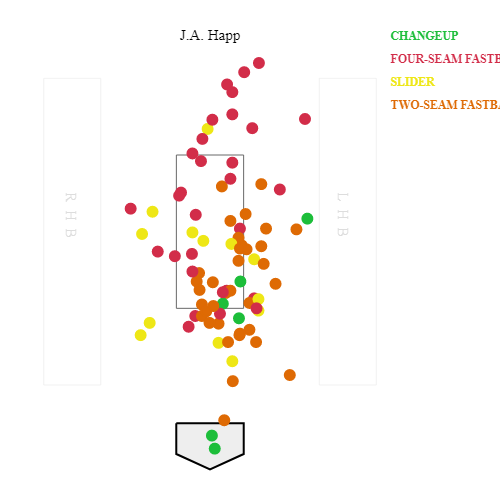 Against the Royals, Happ came right at Kansas City with four-seamers up in the zone, and against Boston, he moved more to his two-seamer, much lower and closer to the edges. Obviously, Boston boasts much more power than Kansas City so right away, so that makes sense, but there’s more to it than that.

Happ’s two-seamer, like a lot of breaking fastballs, isn’t necessarily meant to be a swing through pitch. Think about CC Sabathia or Mariano Rivera with their cutters, the mirror image of two-seams: they’re not trying to strike you out, they’re boring the pitch inside and hoping to induce weak contact.

The usage makes that clear, but so does the whiff rate. Such a dramatic change isn’t just reflective of a better team, but a deliberate approach to induce contact off Boston’s bats. It worked, too, as Happ’s two-seam on Friday induced the softest contact of the night, a 65.3 mph exit velo groundout from Jackie Bradley Jr, and overall exit velocity off the two-seamer was lower (90.9 mph) than the average exit velocity off all pitches (92.8 mph).

What’s this all mean? The ability to adjust from start to start is in theory one of the benefits of Veteran Presents, and certainly Happ has shown some evidence of that. Moreover, I think this is a credit to the oft-maligned “analytics nerds in the tunnel”. Certain Yankee fans draw no end of pleasure mocking the team’s use of data to drive in-game decisions, but that’s exactly what’s happening here. Not only is the data suggesting shifts from game to game, but even from inning to inning: 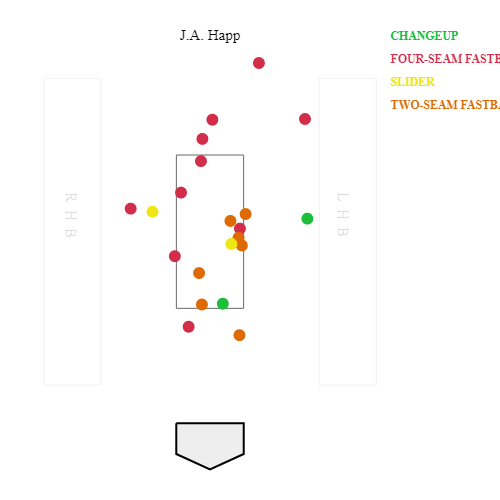 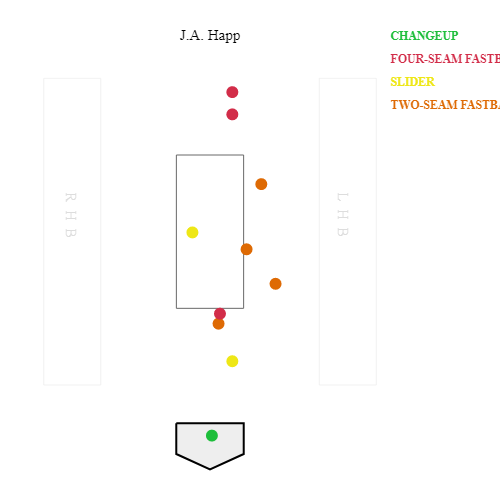 The second inning on Friday was Happ’s worst, the frame with the most pitches and with the long home run by Rafael Devers. Happ threw 33% two-seamers in that inning, and immediately came back an inning later throwing 40%, and lo and behold, two of those resulted in outs - a groundout for Mookie Betts and a swinging strikeout of JD Martinez.

The analysts’ ability to deduce the need for adjustments, the coaching staff’s ability to communicate that need to pitcher and catcher, and Happ’s ability to accept the advice and make the adjustment needed are all happening in real time, and the fact that the Yankees were able to execute it at that speed, against their biggest rival, is a credit to all involved. These are the kinds of little things that add up over a season, and could be a major edge in the division race and beyond. Now if we can just solve the home run problem.