What J.A. Happ needs to do to right the ship with the Yankees

With Happ’s recent struggles, let’s dive into what he must do to improve.

Share All sharing options for: What J.A. Happ needs to do to right the ship with the Yankees

At the beginning of spring training, it was hard not to be excited for this coming season. The team was coming off a 100-win campaign. The bullpen received a couple of additions to again make it one of the most feared bullpens in the league. The starting rotation acquired James Paxton and then re-signed J.A. Happ, who didn’t lose a single game during the regular season with the Yankees. Yet one look at the team’s losing record today and spring training feels very far away. The relievers can’t seem to go an outing without allowing a run, and both southpaws in the rotation haven’t gotten off to a good start.

Some players whose presence on the team we may have downplayed entering the year are now some of the one carrying the team. DJ LeMahieu is off the red-hot start at the plate. Domingo German has had two strong starts to begin the season, while Adam Ottavino and Luis Cessa have been the best bullpen arms so far. With so many injuries piling up, it almost seems like the Yankees just don’t have time for slumps.

Our other off season acquisitions need to figure it out soon as well. I’m speaking about Zack Britton, James Paxton, and J.A. Happ. With our ace Luis Severino down until around the All-Star game and recent bad news about Dellin Betances, our three struggling southpaws need to improve before we dig ourselves into a deeper hole. CC Sabathia is back and you have to figure if something happens to another pitcher either Jonathan Loaisiga will return or Luis Cessa might get another shot. Hopefully from now on players are only coming back from the injured list and not being added to it.

The primary offseason acquistions simply need to figure it out soon. Between Happ, Paxton, and Zack Britton, I want to focus on Happ, because we really didn’t see him struggle last year until the ALDS. He had eleven starts with in New York in 2018 with a 2.69 ERA, but a 4.30 xFIP. That ERA suggests a Cy Young candidate, while the basic peripherals suggest maybe a fourth-rotation piece. Looking back to last year and the beginning of this year, Happ’s numbers might be cause for concern.

Happ’s Fastball since Beginning of 2018

Happ relies on his four-seam fastball so much that it has counted for 50% of his pitches thrown four out of the last five seasons. The remainder of his arsenal consists of a slider, changeup, and sinker, all three of which have rarely seen usage above 20%. Since Happ leans so heavily on his four-seamer, it’s mighty concerning to see the numbers and how his expected batting average and slugging against have increased.

Last season, when Happ arrived from Toronto we saw a rise in launch angle of more six degrees, but it didn’t come with an accompanying rise in exit velocity. Unfortunately, in 2019 batters are hitting his fastball two mph harder, all the while Happ is still averaging a 28 degree launch angle, far from the 21.3 degrees launch angle he had with the Blue Jays to start the season in 2018. Two mph might not seem like much, but it has increased Happ’s expected slugging to 0.813 compared to the 0.470 he had with to end the season per Statcast. 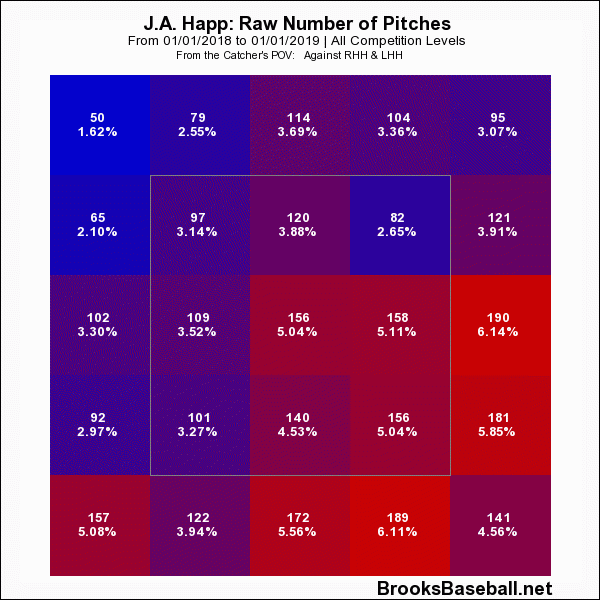 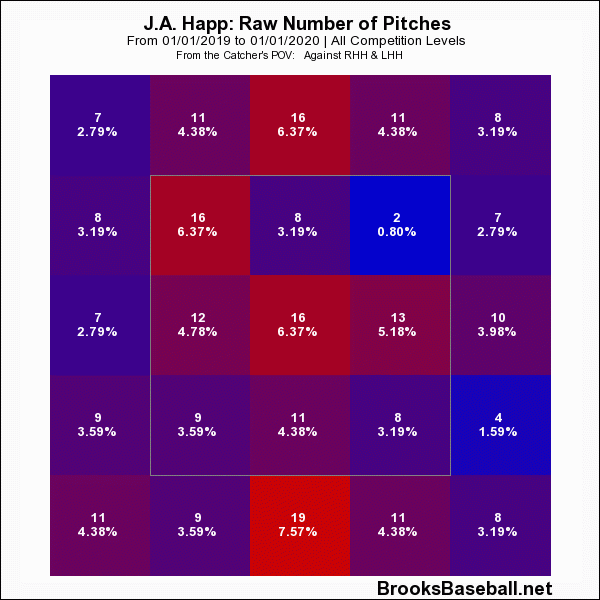 We don’t know if or when Happ will turn the corner, but it might start with his location. Last season he focused on throwing pitches to right side of the plate from a catchers point of view and so far this season the highest percentage of his pitches are being located in the middle. It doesn’t take much to know hitters like pitches closer to the middle of the plate than they would on the outer right side.

Happ is a veteran left-handed pitcher who most likely knows where his pitches are being located and is already attempting to fix it. He must improve his location, which in turn should help him rediscover the four-seam fastball that made him so effective down the stretch last season. Without better control and a quality fastball, Happ is basically what we’ve seen so far in 2019; a pitcher liable to get crushed by the White Sox.