Green was flat-out awful to start the season, but the right-hander returned to his reliable ways.

When the Yankees lost Dellin Betances to injury before the season started, Chad Green became even more important to the bullpen. After all, the relief staff was going to be relied heavily upon as the team was also without Luis Severino and CC Sabathia in the rotation to start the year.

Green responded to that need in about the worst way possible, but after a trip to Scranton and a tweak to his mechanics, he returned and looked much more resemblant of the Green Yankees fans had been used to seeing on the mound. He impressively salvaged a season that looked lost in May.

So, back to that tough start to the season, where Green appeared destined for a unanimous ‘F’ in our yearly report cards. Through Green’s first 11.1 innings of the 2019 season, he allowed 17 earned runs, SIX home runs, and an opponent OPS of 1.274. On April 23, with the Yanks holding a 7-1 lead over the Angels, Aaron Boone gave the ball to Green in an attempt to help his struggling reliever figure things out in low-leverage situations. Instead, Green was hammered for four runs while recording just one out, turning a 7-1 rout into a 7-5 nail-biter. The Yankees demoted him to Scranton shortly thereafter.

Green made valuable use of his time in the minors, tweaking his pre-delivery stance by raising his glove in line with his chest as opposed to rested at the belt. The result? Fourteen strikeouts in 7.1 innings before getting called back up on May 12.

Chad Green changed his mechanics tonight w/ @swbrailriders. As noted by @RiverAveBlues and @RailRidersTT, Green changed placement of hands before he throws a pitch.

Here’s what he looked like during last appearance with #Yankees on April 23 and what Green looked like tonight: pic.twitter.com/EVvk6SvfYI

Green’s adjustments also seemed to help with his fastball velocity, which helped compliment his slider and produced more strikeouts once he got back to the majors. Consider his average fastball velocity once he returned to the Yanks in May and through the rest of the season:

After a couple rough outings immediately upon his return, Green returned to his old self. From May 22 through the end of the regular season, Green fanned 87 batters in 57.2 innings, pitching to a 2.34 ERA while allowing an opponent OPS of .598. As the season went along, Green became Boone’s regular opener, and thrived in that role. He was also the team’s best bullpen arm down the stretch, posting a 0.21 FIP and striking out 17.55 batters per nine innings through 13.1 innings of work in the month of September.

Green carried that dominance over into the early parts of the postseason, tossing 4.2 shutout innings while allowing just two hits. Perhaps suffering from fatigue, he allowed a combined five runs in his last two outings of the ALCS, with the big blow coming on a three-run home run off the bat of Yuli Gurriel in Game Six, putting the Yanks in an early hole.

If there is a lingering concern from Green’s 2019 campaign, it would be the need for a better secondary pitch. Green’s fastball is elite, but his slider has been losing bite over the past few years, and the swing-and-miss percentage on that pitch has dropped in the process. To illustrate, check out the vertical movement on his slider over the years, followed by the swing-and-miss rate on the pitch as 2019 wore on: 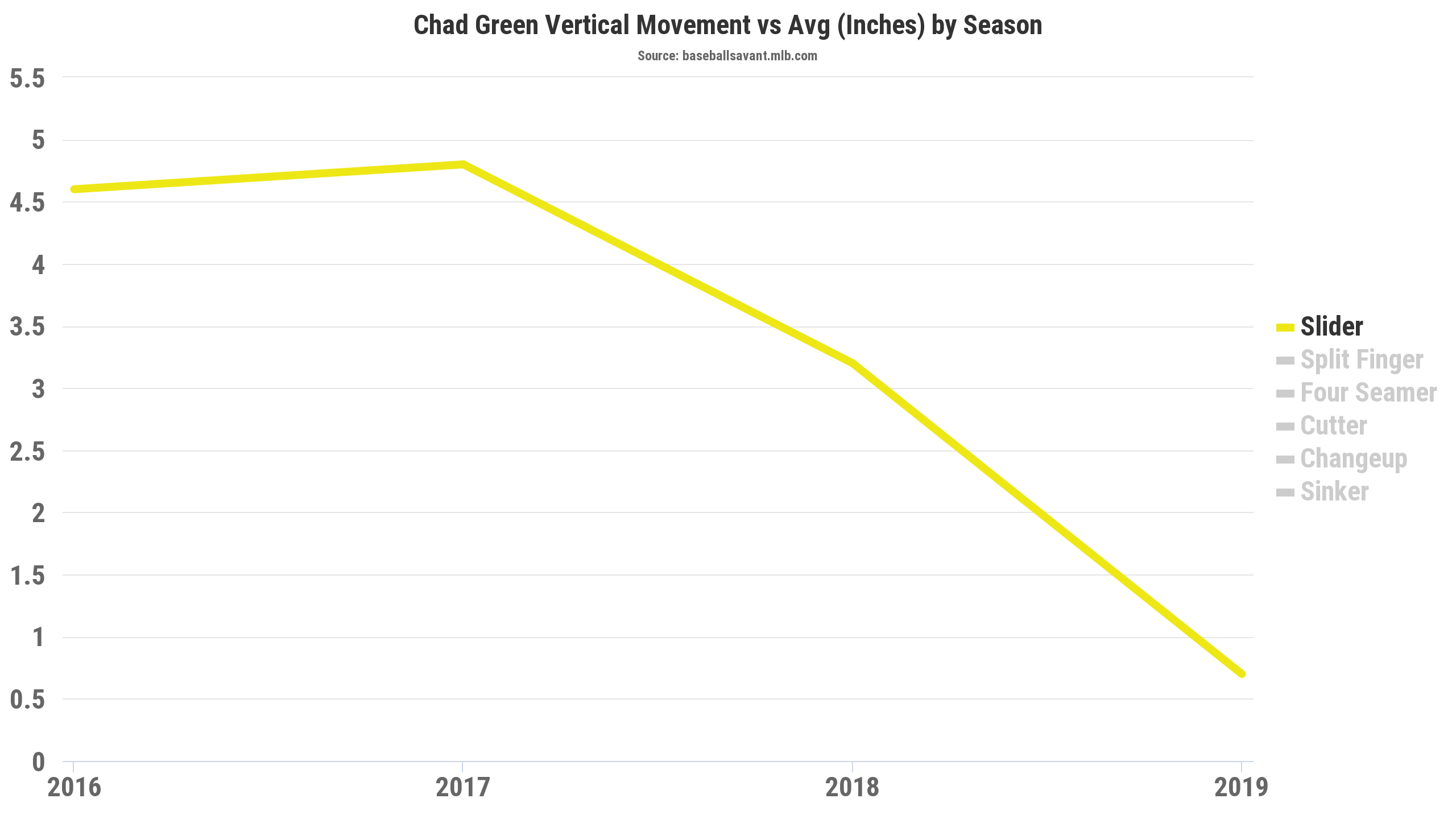 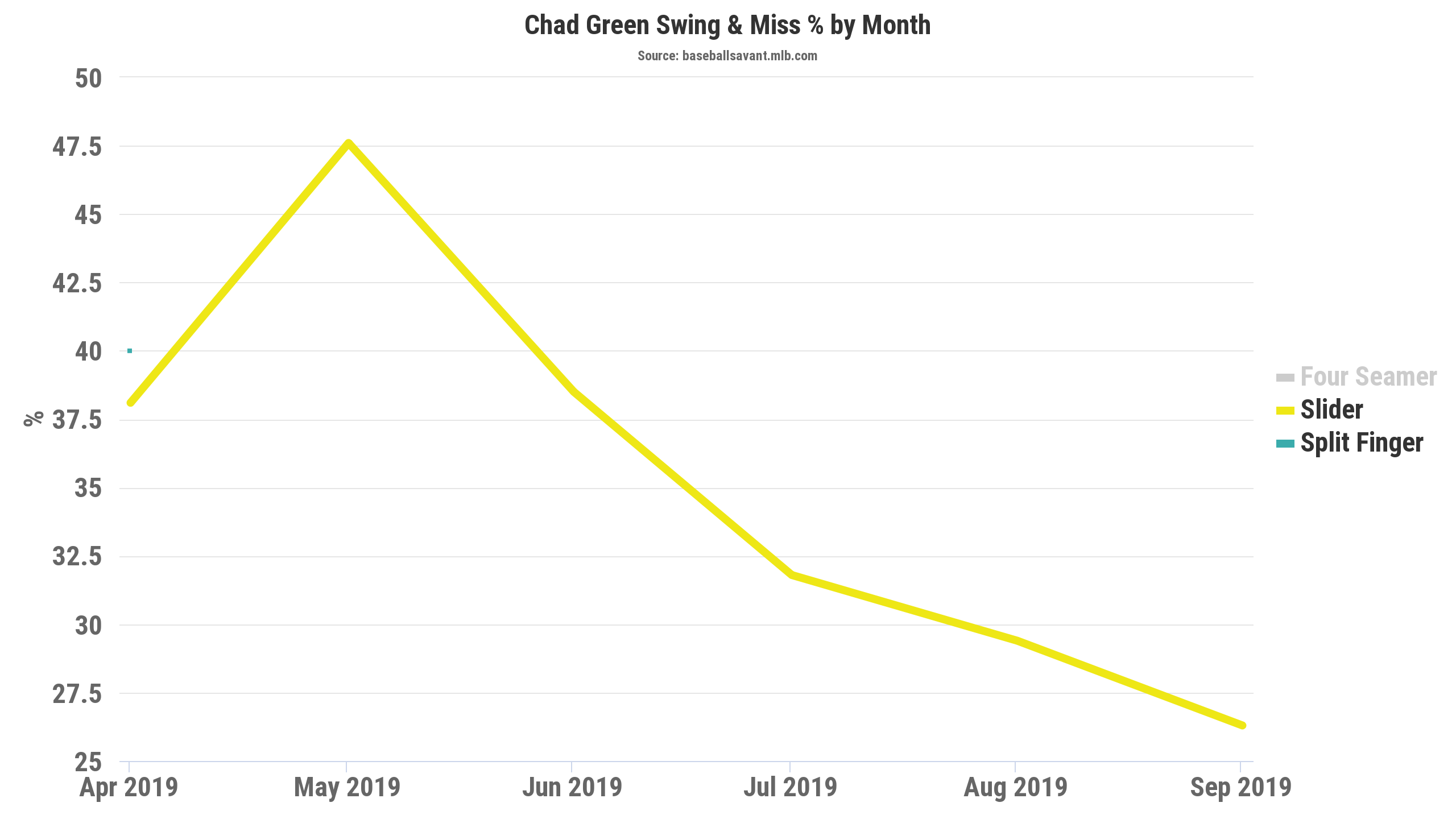 Time will tell if Green can produce a better pitch to compliment his fastball. We’ve seen him toy with a splitter at times, but he rarely used it in 2019. That’s a different discussion for a different day, though.

When looking at his entire year, Green did a fantastic job of overcoming a disastrous start and salvaging his season. Like the Yankees as a whole, his season didn’t end on a positive note, but Green showed he has staying power in the back of the Yanks’ bullpen; they can rely on him in high leverage spots. If you take away his first month of the season, Green’s final grade would look a lot different.