On the Yankees and unlocking postseason Masahiro Tanaka

A switch in location might help Tanaka next season.

Share All sharing options for: On the Yankees and unlocking postseason Masahiro Tanaka

No matter what happens during the regular season, when the playoffs arrive Masahiro Tanaka finds a way to raise his level of performance. We began to witness his postseason prowess in 2017 against the Cleveland Indians and Houston Astros, and the trend has continued ever since. With Tanaka set to become a free agent in 2020, it would be beneficial for both parties for him to find a way to pitch to that dominant level throughout the regular season.

Before we get to what Tanaka did differently during the postseason compared to the regular season, we must look into changes he was forced to make this year because of the juiced ball. Everyone knows balls were flying out of the park at a historic rate, and pitchers needed to make adjustments pertaining to what pitches in their arsenal were no longer working as effectively as before. Tanaka’s slider continued producing great numbers but his split finger did not.

Tanaka’s split finger continued to entice hitters, however, it no longer possessed the ability to miss bats. Considering Tanaka is a three-pitch pitcher working his split finger and slider with his fastballs, he lost the effectiveness of one-third of his arsenal. Hitters cut the whiff rate of his split finger in half as Tanaka lost a strength he uses to put batters away, lowering his K/9 to 7.37 compared to the two previous seasons when he generated a 9.00 or greater.

Hitters started to put his split finger in play more often, and the groundball percentage for his split finger increased about five percent compared to the last couple of seasons. His line drive percentage of 5.65 allowed, per BrooksBaseball, is the highest percentage he’s given up on his split finger since joining the Yankees. For the first time in his career, Tanaka allowed a slugging percentage over .400 off his split finger. Overall, Tanaka couldn’t generate as many strikeouts as he usually does because he was limited to using the slider as his main strikeout pitch. Furthermore, he needed to rely more on balls in play, and when they were put in play they were hit harder than ever because of the new ball, as if the change in the ball wasn’t already effecting the movement of the pitch.

During the postseason, Tanaka didn’t change the usage percentage of his pitches much. However, the location of one pitch saw a significant change. Considering Tanaka’s fourseam fastball generated a .313 batting average and .633 slugging percentage during the regular season per BrooksBaseball, easily the least effective pitch of the trio, he decided he wouldn’t allow it to beat him in the postseason. He did so by elevating the fastball more often, and avoiding the middle of the strike zone where most of the damage was done. 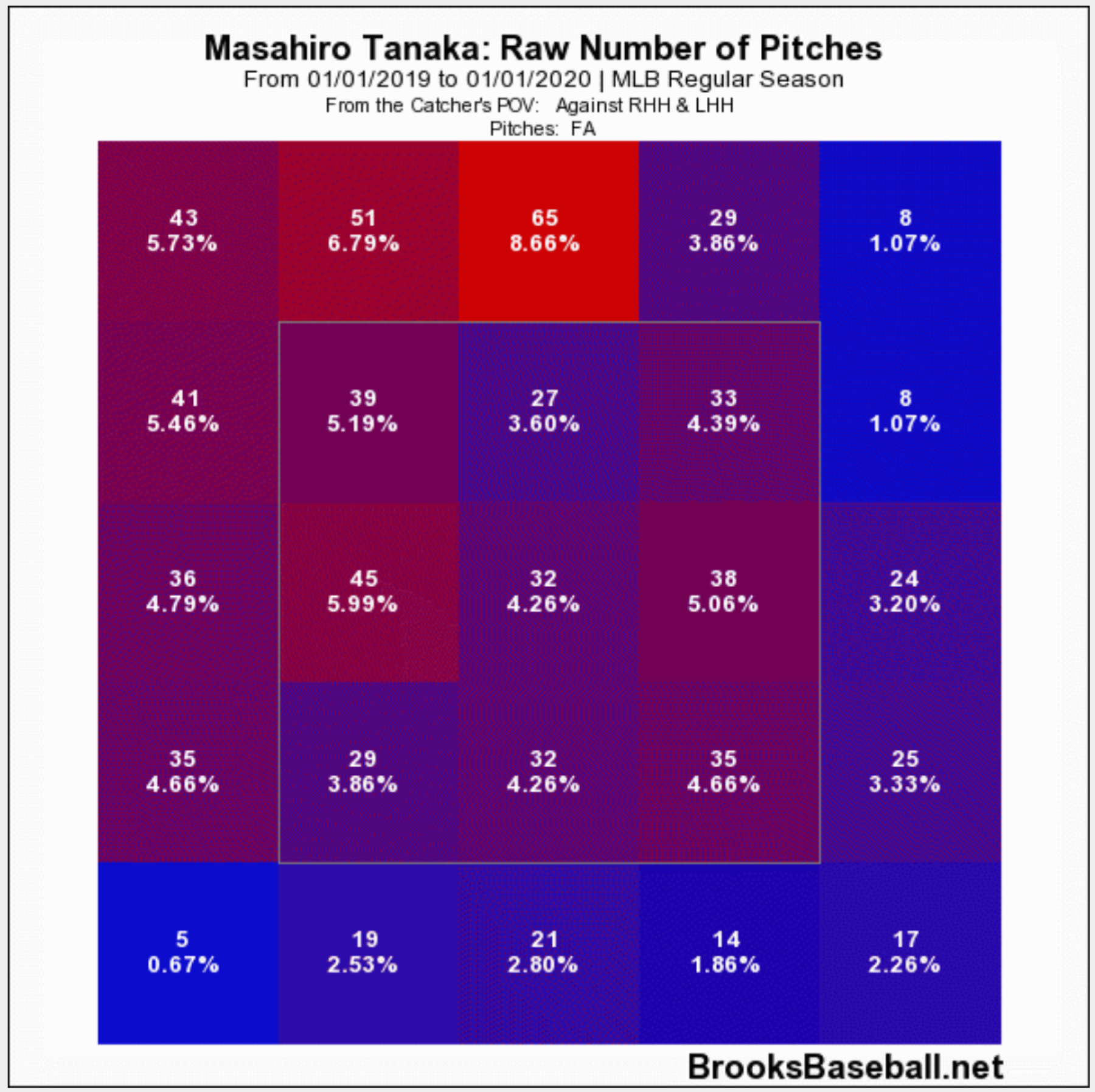 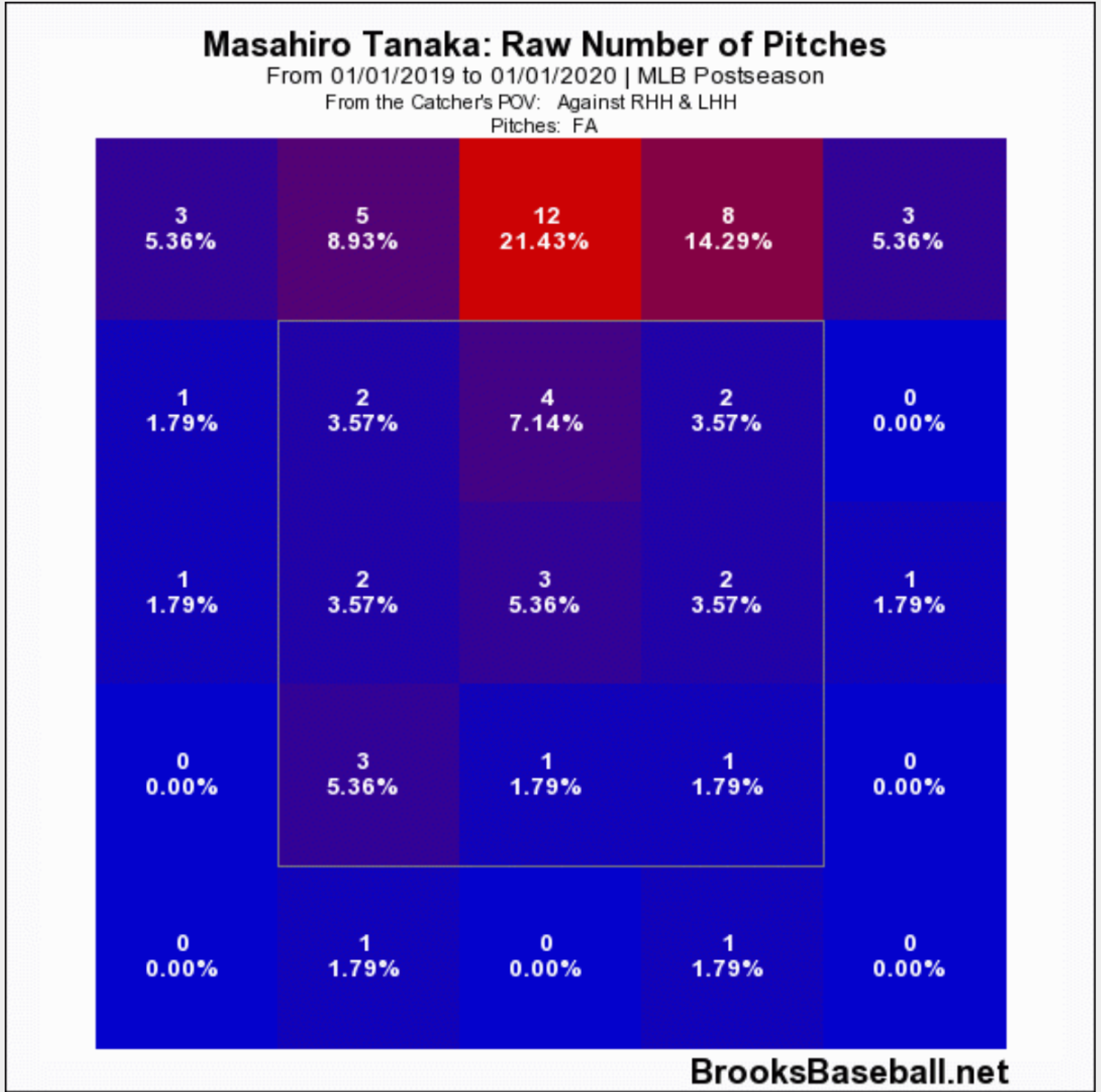 Compared to the regular season when Tanaka threw his fastball for a ball 34.75% of the time, during the postseason that mark spiked to 50.00%. Normally when a pitcher is missing the strike zone it would be a disadvantage, however, because Tanaka didn’t find too much success with this pitch during regular season within the zone, elevating provided an alternative option that ended up working out. The fastball was thrown for a strike less often, which led to drop in whiff rates as well. What did rise was the amount of fastballs put in play, jumping from 15.71% during the regular season to 21.43% in the postseason. With the change in location, the fastball generated a .077 batting average and .077 slugging percentage in the postseason.

Entering the playoffs Tanaka had a dilemma to figure out. His success in the major leagues had depended on the production of his split finger and slider while the fastball was used more as a secondary pitch contrary to most major league pitchers. Since the juiced ball took away his split finger leaving him with a slider to heavily depend on, he now needed to worry about both the fastball and split. The split finger generated just about the same numbers in the postseason compared to the regular season, but the fastball made enough of a difference to give him another pitch to work with.

If next season’s ball is similar to the one of 2019, Tanaka could face the similar problem of having two-thirds of his arsenal not producing as he would like. Even though the slider resulted in a .192 batting average and .339 slugging in the regular season, then accounted for 10 of his 12 strikeouts in the postseason, Tanaka can not simply rely on one pitch as a starting pitcher. He needs one of the fastball or splitter to work in his favor. Elevating might have helped him in a small sample size in October, but during the regular season the numbers back up his change in location as well. If anything, Tanaka was unfortunate in using his fourseam fastball because according to Statcast’s xBA and xSLG, his production was expected to gain better results.

Projecting what can happen throughout a whole season can be difficult, but the Yankees might have built a foundation with Tanaka during the postseason that can lead to better success in 2020. He might not be the pitcher of 2016 with a WHIP of 1.08 and 3.07 ERA, but if the adjustment generates a sub-4.00 ERA it would be a step in the right direction. Many fans don’t want to see Tanaka sign somewhere else since he will be a free agent after next season, and a great performance in 2020 could secure his future in pinstripes.