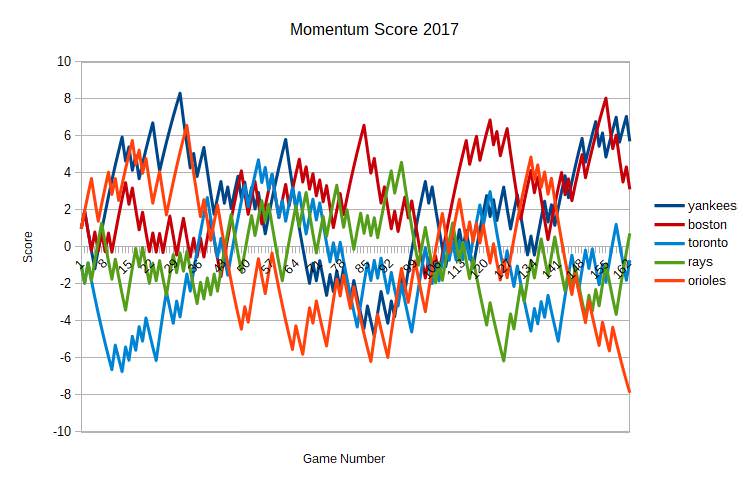 Back in the day, someone going by dmr posted this article over at Deadspin. In it, he introduces the concept of the Mo Score, which is a way of objectively measuring a team's momentum at any point in a season. I really liked it, so I've recreated it here for the AL East division races in 2017 and 2018.

To calculate Mo Score for any team on any day, simply multiply their score for the previous day by .95, then add or subtract one based on whether they won or lost that day. I think it's best to think of this as a sort of power ranking score. It does a good job of incorporating results from the entire season while favoring recent outcomes. However, it doesn't consider how a team is expected to do in the future, which isn't ideal for a power ranking metric. For example, it wouldn't have liked the Brewers over the Cubs for much of 2017. On the other hand, a metric that only deals with actual results is a good complement to Playoff Odds.

On to the 2017 graph. Honestly, I'm not very interested in how the Blue Jays, Rays, and Orioles did. Only Red Sox vs. Yankees was compelling. We all remember that the Yankees kind of shot out of the gate, so it's not surprising to see the dark blue line generally at the top for the first fifty games. We also remember Aaron Judge's struggles in August and how the Yankees lost the division lead in that middle part. Interestingly, though, the graph makes it seem like the biggest problem wasn't August. The Yankees really swooned a few weeks before the All-Star Break, and they didn't recover until just after. The Red Sox were able to take advantage of that. When Judge got hot again, so did the Yankees, but the Red Sox were able to respond well enough to hold them off. Most of us probably remember how intense September was. On to 2018: 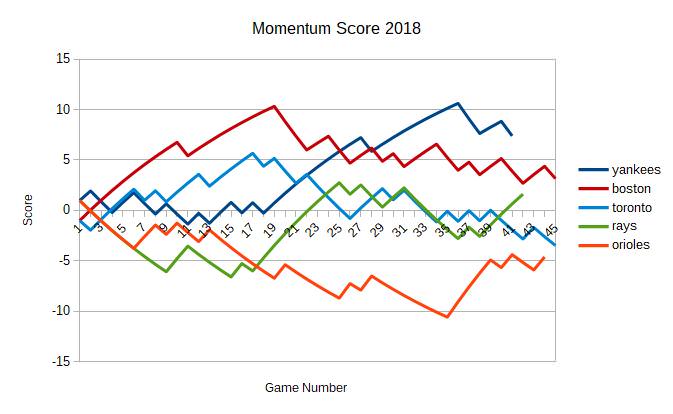 Before we look at individual teams, look at the y-axis. It goes from -15 to 15, because the Red Sox, Yankees, and Orioles have all gone on extreme runs already. In 2017, Boston and New York could barely reach a score of 8 one time. In 2012, only the Yankees and A's cleared 8 all year in the AL. In 2018, the Red Sox and Yankees have already cleared 10, and the Orioles have cleared -10.

So yeah, the Orioles have been terrible. Toronto got off to a pretty good start, but they've tailed off ever since. Tampa Bay continues to spend a little too much time on the wrong side of the x-axis. As for the Yankees and the Red Sox, it's kind of interesting. They both have these great hot streaks, totally identical. And both have mostly traded wins and losses otherwise. The Yankees are on top right now, but it's yet to be seen whether they really have all of this momentum. They may continue to play .500 ball. As for Boston, the fact that they played so well right off the bat caused many Yankees fans to panic. 'The Red Sox are too good! The Yankees have to do something!' It shouldn't have been a surprise that it didn't last.

Those are my thoughts from looking at these graphs. What do you think?