Whether you love or hate sabermetrics, the fact is they are here to stay. I used to be one of those fans who thought it’s ridiculous that there’s a stat for everything and largely ignored most advanced stats. However, that was mainly due to the fact that I didn’t understand them. As I’ve gotten a better grasp on sabermetrics, I’ve embraced them. I still don’t believe they should be the end all be all for every argument or evaluation of a player, but they certainly need to play a part, and a large part at that. The fact is they are the best and most reliable way to calculate player value. The eye-test is simply unreliable. But, baseball is a game played by human beings. As Yogi Berra said baseball is 90 percent mental.

Yankees fans are notoriously critical and the current Yankee who seems to draw fans’ ire is Sanchez (Sonny Gray?). We all know Sanchez is one of if not the best offensive catchers in baseball, but he is constantly criticized for his defense, or more specifically blocking. Sanchez has a cannon for an arm and is an above average pitch framer, worth almost 3 runs above average (although he could be even better in my opinion). However, Sanchez has given up a league leading 7 passed balls and 22 wild pitches, second most in baseball. Last year Sanchez tied for the most passed balls allowed in baseball with 16 and was again second in wild pitches with 53 even after missing a month. Many fans see this as a huge problem and want Austin Romine to start (lol) or think Sanchez is lazy, bad defensively, etc. Others point to the actual number of runs attributable to passed balls to argue the issue is overblown. Indeed, Sanchez was responsible for 5.5 runs last year solely from passed balls, and that’s without accounting for his other defense. So are the passed balls overblown? Yes and no, or at least that’s my hypothesis.

On the one hand the numbers clearly show, the passed balls accounted for just 5.5 runs over the course of last season. Considering that number does not include the runs Sanchez saves with his throwing arm or framing coupled with how good his and the Yankees’ offense is, 5.5 is essentially nothing. But what about the mental side? Does Sanchez’s "inability" to block pitches change the way pitchers pitch? To attempt to answer this question I looked at pitch selection data from several Yankees pitchers and compared different splits to see if they pitched differently. This is certainly an imperfect methodology, but more on that later.

I chose five pitchers, three starters and two relievers. I also tried to get a range of pitchers to adequately cover all pitcher types so the data isn’t biased. The pitchers I chose are Severino, Tanaka, CC, Green, and Shreve. This gives us a good mix of hard-throwers, soft-throwers, guys who throw a lot of breaking balls, fastball-heavy pitchers, and guys who pitch in high and low leverage situations. If Sanchez's defense does effect the pitchers' pitch selection, then we would expect a higher usage of fastballs and less breaking balls. The data is pitch selection by count with no runners on base and with runners on base to better cover the various situations. The data covers 2017-18 and is courtesy of Baseball Savant. (Note: Baseball Savant did not have data for 3-2 counts and no runners on). 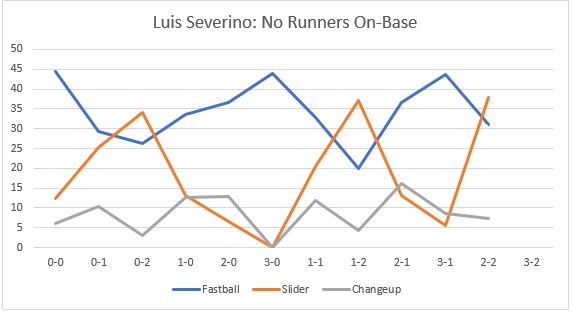 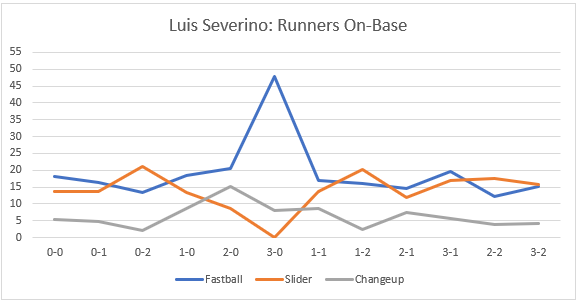 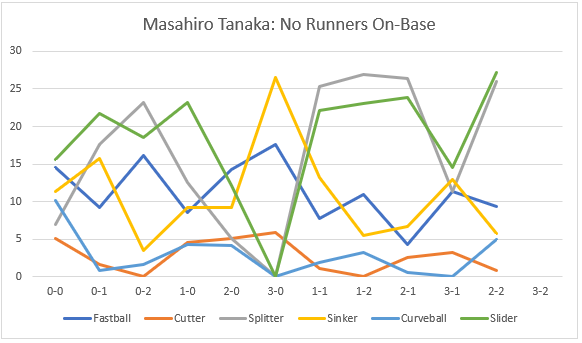 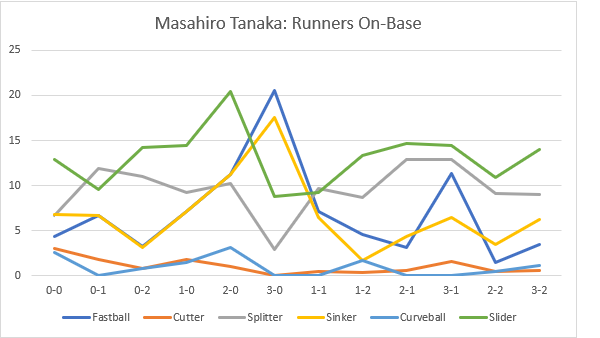 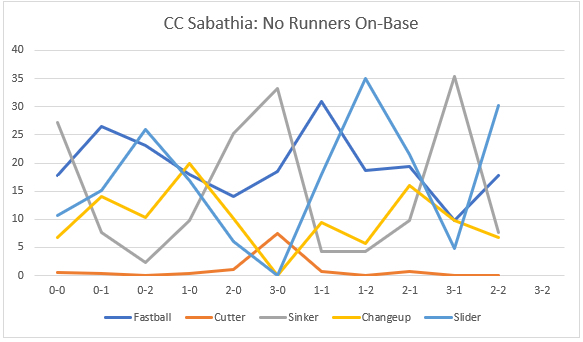 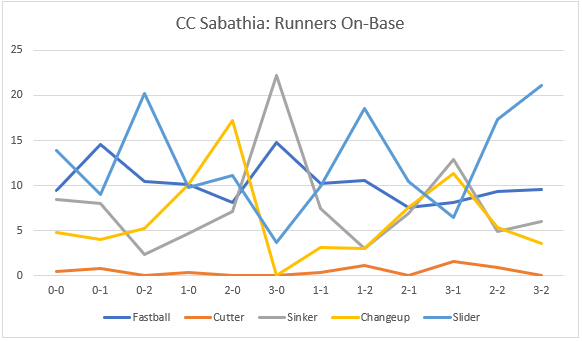 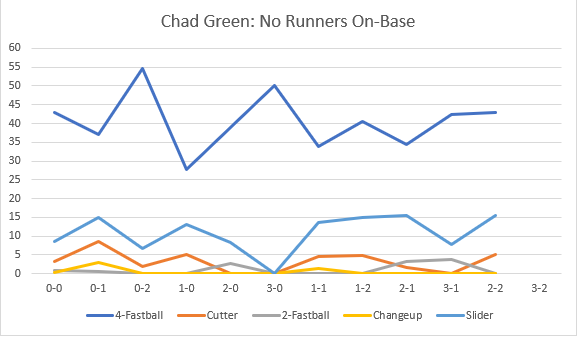 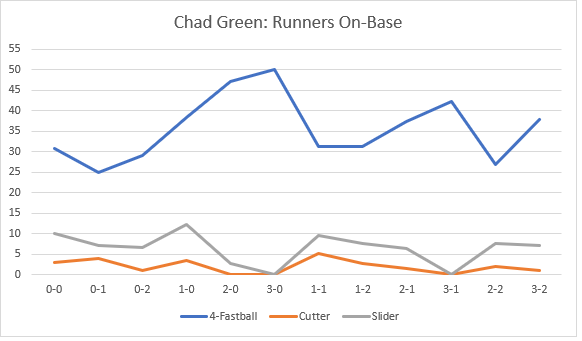 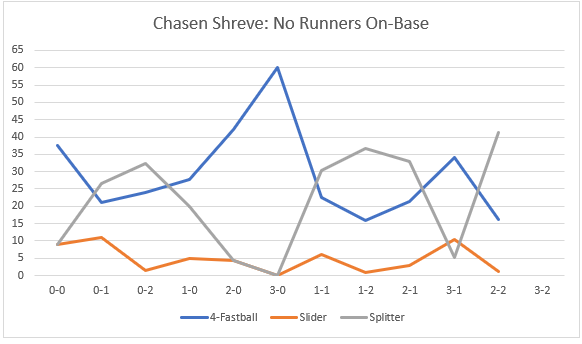 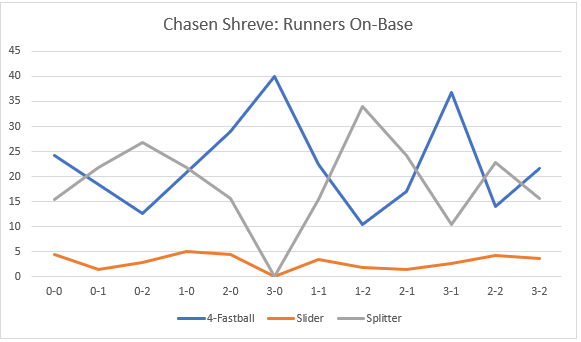 I am not a statistician by any stretch. In fact, the extent of my statistical abilities is to run a multiple regression analysis. In other words, my methodology here is far from perfect. The process I chose to analyze the pitchers was meant to get a quick snapshot and see if there was anything to my hypothesis that pitchers change the way they pitch to Sanchez with runners on-base. It appears that none of the pitchers examined other than Severino really change the way they pitch with runners on-base.

This method does not differentiate several factors. First, the data is all pitches thrown by these pitchers from 2017-18. The data does not account for who is catching. This really isn't a big deal given that Sanchez has caught the majority of innings for the Yankees over the past two seasons and the sample size is robust enough to make generalizations without differentiating who is catching. Second, the data is divided into nobody on-base and simply runners on-base. It does not account for where the runners are on-base, score, inning, etc. Breaking the data down further into these categories might yield different results. But this post is already long enough and that would require even further investigation; perhaps in the future. Finally, I only chose five pitchers. While I tried to encompass all types of pitchers on the Yankees' staff, it is possible the sample is not representative of the entire staff. I don't think this is an issue given that the relievers at the bottom of the pecking order are turned over frequently, Gray, Robertson, and Kahnle have thrown fewer innings than the pitchers chosen here since they were mid-season acquisitions, and the pitchers chosen do represent the staff well in my opinion.

While many fans argue that Gary Sanchez's defense is a detriment to the Yankees, based on the advanced metrics, it is not. Furthermore, it appears that Sanchez's defense has no to minimal effect on pitch selection. In other words, Sanchez's defense does not factor into the mental side of pitchers. Based on the data, my hypothesis that pitchers throw more fastballs and less breaking balls with runners on-base does not hold up. Of course, the methodology I used is far from perfect and could be improved further. Perhaps, if time permits, I will look at the game situation more closely to see if pitchers change their pitch selection based on situation. Interestingly enough, this Yale study finds that pitchers do in fact throw more fastballs with runners on base. Their sample is all major league pitchers so the Yankees may simply be an outlier. Given the Yankees' move away from the fastball, this could explain why the findings or different. Or the explanation could be that the authors of the Yale study are much smarter than I am and used actually statistical analysis to analyze the data.