Whitey wasn't the only famous Ford to stand out on a mound in pinstripes.

Pitchers are fragile. That's just one of the more disappointing truths of baseball. It's simply difficult to last a long time at the game's highest level putting such a toll on one's elbow and shoulder. There is often a misconception that players are more fragile than they used to be, when pitchers threw complete games every three days or so and ended seasons in the vicinity 40 starts and 300 innings.

However, as Joe Posnanski wrote, the story of pitchers getting hurt is as old as baseball. Hall of Famer Candy Cummings was one of the game's first famous curveball artists, and he only managed to produce five good years before his weary arm felled his career at age 28. Yankees fans know all too well of how quickly Chien-Ming Wang's promise faded due to a multitude of injuries.

The tale of Russ Ford is a similar story with an amazing debut, an unhittable pitch, and an early decline. Nonetheless, his rise to stardom represented one of the Deadball Era Yankees' few highlights. No one, not even Ty Cobb, could touch his "emery ball."

What that pitch, eh?

The Yankees don't have too many ties to the Great White North, but Ford makes for a pretty strong all-time battery alongside another Russ (Russell Martin). Russell William Ford was born to parents Walter and Ida on April 25, 1883 in Brandon, Manitoba, and remains the greatest pitcher to come out of the province most associated with another sport, through the NHL's Winnipeg Jets. Despite his Canadian birth, he actually had ties to the man who would become president of the United States in just a few years, Grover Cleveland, his mother's second cousin.

Ford did not remain in Canada for long, as Walter Ford moved his family to the United States in 1886, where he became employed as a clerk in Minneapolis. Ford's family became hooked on the sport, and Russ watched his older brother Gene rise from obscurity all the way to the major leagues. Two years older than Russ, Gene Ford was plucked out by the Indianapolis Indians of the American Association to pitch for them at age 22, and after a successful 1904 campaign closer to home with the Minneapolis Millers, he was purchased by the Detroit Tigers. He only made it into seven games with Detroit in 1905 before being farmed out, never to return to The Show in three more years of pro ball, but his ascent showed Russ that it was possible.

The same year that Gene Ford made his MLB debut, Russ Ford began his journey to the majors with the Cedar Rapids Rabbits of the Three-I League (Illinois, Indiana, and Iowa). He went 38-22 over two years before moving south for an opportunity with the Southern Association's Atlanta Crackers. Ford was effective for them, but it wasn't until 1908 that he stumbled upon the pitch that would launch him to fame. The Canadian Baseball Hall of Fame website detailed Ford's discovery of the emery ball:

After a pitch sailed over his catcher’s head and smacked a concrete grading, a scuff mark appeared on the ball. Using the same ball, his next pitch had an unusually sharp break. Armed with this information, he soon began employing a piece of emery paper on his ring and cut a small hole in his glove because he didn’t want opposing pitchers to find out his secret.

Like many Deadball Era pitchers, Ford threw a spitball, but this super-scuffed ball broke with even more devastating speed. Scouts from the struggling New York Highlanders liked what they saw from Ford that season, so they signed him to a contract and he debuted with the big club on April 28, 1909 against the Red Sox in Boston's Huntington Avenue Grounds. It wasn't exactly memorable, as he pitched three forgettable innings of mop-up ball in a blowout loss, and manager George Stallings sent him back to their Eastern League farm club, the Jersey City Skeeters.

Ford continued to experiment with the emery ball, working with catcher Ed Sweeney to perfect it. His teammates began to miss the pitch by 12 to 18 inches in batting practice, and he ended up pitching to a 2.41 RA in 276 innings while striking out 189 batters that year, an incredibly high number for the time. Stallings invited Ford back to spring training in 1910, and after more time with Sweeney and coach Duke Farrell, he was ready to truly unleash his weapon on the American League.

Rise of the Rookie

In 1910, Ford joined a Highlanders rotation that had pretty much no one else reliable beyond 92nd ranked Yankee Jack Warhop. The team had finished dead last in 1908 and followed it up with another under-.500 performance in 1909. They tied the Red Sox 4-4 on Opening Day and then dropped two of three before Ford took the mound on April 21st for his first major league start.

He had a formidable foe in the eventual World Series champion Philadelphia Athletics, led by future Hall of Famers Home Run Baker and Eddie Collins. Undaunted, Ford set the tone for his season by twirling a shutout, walking none and striking out nine A's, all with Sweeney behind the plate. Ford went on to have the year of his life.

There have been few pitching seasons in the history of baseball quite like Russ Ford's 1910, and his deception with the emery ball made it all possible. Fans going to rickety Hilltop Park in Washington Heights were certainly rewarded for their tickets. Had the awards existed, Ford would have been a shoe-in for AL Rookie of the Year and a top choice for the Cy Young Award (though the 43-year-old Cy was amusingly still pitching). Thanks to Ford, improvements on offense, and more, the Highlanders jumped all the way to second place with 88 wins, 14 more than they had in 1909.

Ford was dubbed "The Boy Wonder" and the "Matty of the Yankees," quite a claim given how much Hall of Famer Christy Mathewson was adored across town with the Giants. Cobb even put him on equal level with Walter Johnson, the greatest pitcher of his era. Even in this time, the emery ball wasn't strictly legal, but enough other pitchers did it that umpires were not rigid on the rules, though he did have to be subtle. T. Kent Morgan and David Jones of SABR quoted umpire Billy Evans recounting Ford's emery ball process:

"Ford worked cleverly. He had the emery paper attached to a piece of string, which was fastened to the inside of his undershirt. He had a hole in the center of his glove. At the end of each inning he would slip the emery paper under the tight-fitting undershirt, while at the start of each inning he would allow it to drop into the palm of his glove."

Opposing batters finally fared a little better against Ford's repertoire in 1911, but a 2.27 ERA (65 ERA-) and 158 strikeouts over 33 starts meant they were still having serious problems handling him. He even earned some MVP votes despite watching his fellow Highlanders sink back to .500 and the second division. Regardless, he was the ace for a team in the country's biggest city and engaged to a woman named Mary Bethell. It looked like good times were still ahead for the 28-year-old Ford. 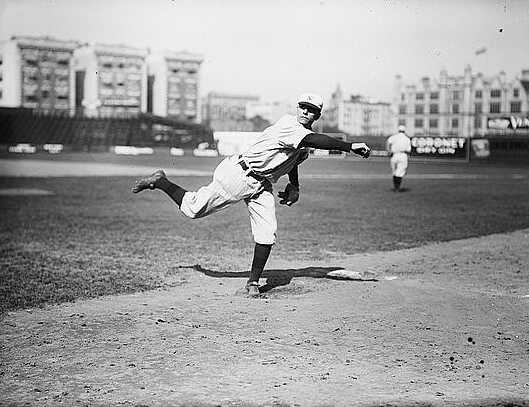 By the time the first few weeks of 1912 rolled around, it was evident that Ford wasn't the same. He appeared more hittable than ever, he wasn't getting strikeouts, and batters had seemingly figured out his trick. Although his ERA and FIP remained roughly league average, he led the AL in losses (21), earned runs allowed (115), and homers allowed (11). The long days of pitching had fatigued his shoulder, and he gradually faded over the next two seasons.

The Highlanders officially renamed themselves the Yankees in 1913 and gave Ford another chance to rediscover the glory of his 1910 and 1911 seasons. The team had returned to last place in 1912 with 102 losses and desperately needed someone to step up as Ford did just a couple years prior. It was no use. Ford used his guile to surpass the average AL ERA with a 2.66 mark (10 percent better), his strikeouts dropped even further and the Yankees lost 94 games.

At season's end, owners Frank Farrell and Bill Devery dramatically cut Ford's already-minuscule pay. Unhappy and tempted by a $10,000 offer to join the new Federal League, Ford bolted the Yankees in January 1914 for the Buffalo Buffeds. An exciting but all-too-short five-year stint with the Yanks was over, and soon, Ford's career came to a grinding halt as well. Success briefly came back thanks to a FL-best 0.934 WHIP and 1.5 BB/9 in 247 1/3 innings of 1.82 ERA ball, but Ford, the team, and the league all sank in 1915. His numbers were worse than ever, and after the Federal League folded at season's end, he never pitched in the majors again.

Ford hung around in the minors for two more years, pitching for the Denver Bears and the Toledo Iron Men. It was evident that he wasn't going to catch on with any big league teams though, so he moved on from baseball. Ford found jobs back near the location of his greatest triumphs in Newark and New York City before moving to North Carolina near his wife's family. It wasn't until he turned 52 in 1935 that he admitted to using the emery ball in an interview with The Sporting News, a full 25 years after his phenomenal 1910.

Ford had two daughters and lived a long life, passing away due to a heart attack at age 76 on January 24, 1960. When the Canadian Baseball Hall of Fame was established in 1983, it was only a matter of time before they honored him, and sure enough, Russ Ford was inducted in 1989 among its fifth class of baseball icons. The Yankees had become baseball's most dominant team, but none of their standout pitchers ever had a rookie season like Ford's 1910.

Appel, Marty. Pinstripe Empire: The New York Yankees from Before the Babe to After the Boss. New York: Bloomsbury, 2012.

Steinberg, Steve and Lyle Spatz. The Colonel and the Hug: The Partnership That Transformed the New York Yankees. Lincoln, NE: University of Nebraska Press, 2015.