The Yankees scored eight runs and overcame a four run deficit without their best hitters. Yup.

This looked like it would be a typical Yankee loss out of the gate. Chris Capuano was pretty terrible in his third of an inning of work. Yes, just one third of an inning. Capuano allowed four earned (one was a sacrifice fly after he was removed) on a Wil Myers RBI double and two RBI singles from Yunel Escobar and Logan Forsythe. Chase Whitley came in and was able to finish off the inning and only allowed the one run on the sacrifice fly, even though the bases were loaded with one out.

From there, things were not like the typical 2014 Yankees™. Usually, it would go like this: the Yankees would only put up a few hits and walks and would be handily put down by the opposing pitcher. Actually, it was always the case with a four run deficit:

Yankees have not overcome a deficit of 4+ runs this season.... tonight the night?

Luckily, Jake Odorizzi was off his game. Brian McCann put the Yankees on the board first with a home run in the bottom of the first, and then then the Bombers came even closer in the third. With runners on second and third, Brian McCann recorded his third RBI of the game as a single scored both Jacoby Ellsbury and Chris Young.

Chris Young then did a thing. He hit a baseball over a wall that was placed in the outfield to demarcate home runs, and it increased the score by one to tie the game at four. The crowd gasped.

From there, the game cruised right along. The Yankees tacked on a couple more insurance runs in the eighth (on RBI doubles from Ichiro and Chris Young), and the bullpen put up eight innings of one-run ball; it was a smorgasbord of pitchers that got the job done. Chase Whitley, Lord Preston Claiborne, Adam Warren, Dellin Betances, and Esmil Rogers nailed it down and the team ended up winning handily, 8-5. The only blemish was a solo home run that Rogers allowed with two outs in the bottom of the ninth.

This was a really nice win, and with the offseason the Yankees had, I think a lot of people wouldn't have expected that the first time the team would overcome such a deficit would be on September 10th. But, such is life. The Yankees' playoff odds per FanGraphs stand at 1.0%: 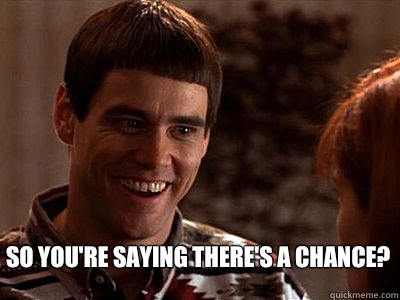 The Yankees will take on the Rays for the rubber game of the three game set as #BigMike (Michael Pineda) will face off against Alex Cobb. The game starts at 7:05 PM EST and you can catch the game on YES or MLB.tv.