Why have Jacoby Ellsbury's defensive metrics been unfavorable?

Share All sharing options for: Why have Jacoby Ellsbury's defensive metrics been unfavorable?

When the Yankees brought in Jacoby Ellsbury on a seven year, $153 million contract, one of the primary motivations was because of his defense. His offense certainly was not going to be bad (he'll always have 2011), but defense was and, I believe, still is his forte. From 2008 (his rookie season) to 2013, Ellsbury ranked seventh in outfielder UZR and UZR/150. But so far this season, his defensive metrics haven't been agreeable. By both Total Zone (-6 runs) and UZR/150 (-5.6), Ellsbury has been in the red.

I usually follow a simple rule when it comes to defensive metrics: it has to match up with the eye test. I, and many of you out there, watch Jacoby Ellsbury every day. We know that he's been good. So what's up with that? When this question was first posed on the podcast, I had a simple hypothesis that I thought made sense: because Ellsbury has Brett Gardner to his right, he doesn't have to cover as much ground, therefore hurting his range factor. Simple enough. But, I thought to myself--is that really the case? So, I took a look at the defensive spray charts for Ellsbury 2012 to 2013, and then compared them to this season to see if that hypothesis held.

Hm. That's not exactly what I thought I'd see. It appears as though his range into left field is almost identical when comparing 2012-2013 and 2014, but his range into deep right-center and right-field is greatly expanded in his time before coming to the Yankees. This is because of the following: Ellsbury never had to range into left field because of the Green Monster--there's just no room to cover; Shane Victorino generally covered close to the line; and, there is the immense amount of field to cover in deep center-field at Fenway Park. There's only so far that Ellsbury can range backwards in Yankee Stadium, while in Fenway Park, it can almost be limitless. There's also dealing with Ichiro Suzuki in right field instead of Shane Victorino. Here's a comparison of their spray charts in right field: 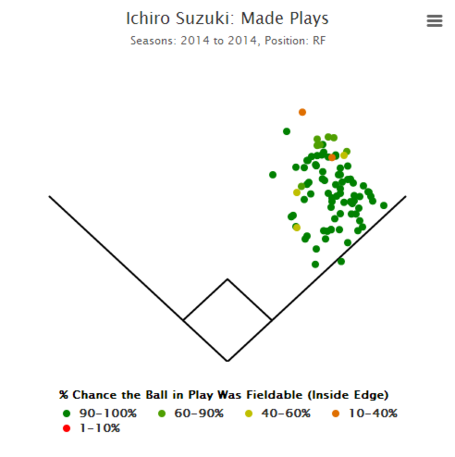 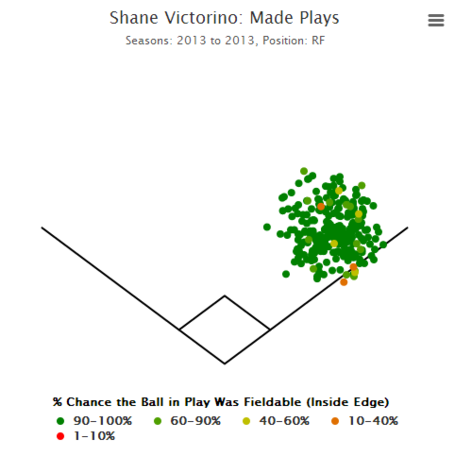 I know that Ellsbury has had other teammates in right field (for both teams), but this can give us a hint as to why his range has changed. Because of the short porch in right field at Yankee Stadium, Ichiro cannot range behind him, but certainly plays closer to right-center field, the place where Ellsbury's range has diminished. This, combined with the different ballpark dimensions, may be our answer.

The final piece to all of this just has to do with defensive metrics in general. Firstly, single-season (and especially partial-season) defensive metrics just aren't reliable. They rely on historical batted ball data, so their results have to be regressed to a three-year mean. So really, defensive data about this year won't be as reliable until down the road. The other, and most important factor, is that defensive metrics don't necessarily tell us whether the fielder played excellent defense or not, it's just based on the criteria of the batted balls. The results of a limited sample do not change the overall talent level of the player; they're just possible results given a certain talent level.

Overall, I would not make much of his current defensive numbers. They disagree with what we're seeing, with his current talent level, and pretty much all the scouting information people have on Ellsbury. Those are more predictive than partial-season UZR. My feeling is that it will eventually regress to its real mean, and then we can finally start putting an accurate number to what we know is pretty-darn-good defense in center field.