It would have been easy to be intimidated by the '98 Yankees, but "Mr. Padre" was definitely not affected.

Share All sharing options for: Remembering Tony Gwynn and the impact he made on Yankees fans in 1998

Few players in major league history have ever been so pure a hitter as San Diego Padres great Tony Gwynn. He suited up 2,440 games over 20 years exclusively with the Padres, notched 3,141 hits, won eight National League batting titles, and he ended his playing career with the highest career batting average seen since Ted Williams. He was an outstanding hitter who basically never struck out, and a ton of factoids are hovering around the Twitterverse right now about how difficult it was to handle him. (This might be my favorite.) Had it not been for the Players' Strike in 1994, the .394-hitting Gwynn might have hit .400; only 19 players in major history ever had a higher career batting average than Gwynn's .338.

This morning, Major League Baseball was just crushed by the awful news of Gwynn's tragic passing at age 54:

We mourn the passing of Hall of Famer and @Padres icon Tony Gwynn, who died today at the age of 54. pic.twitter.com/lXPEVSzRj3

Jim Salisbury at CSN Philadelphia had just written a touching Father's Day article about Gwynn and his son Tony Gwynn, Jr., a reserve outfielder on the Phillies. Salisbury talked of the elder Gwynn's battle with cancer of the salivary gland and how the family hoped for his recovery despite his failing health in recent months. Gwynn had been baseball coach at his alma mater, San Diego State, since 2003, where he coached future big-league aces Stephen Strasburg and Justin Masterson.

Sadly, Gwynn's recovery was not meant to be; he's gone off to the great ballpark in the sky to join, among others, the longtime voice of the Padres and former Yankee Jerry Coleman, who also passed away this year. (Reminder: Cancer is the friggin' worst and for the love of all that is sacred, quit it with the chewing tobacco before it kills you.)

Since Gwynn spent his entire career in the National League, the Yankees did not have too many interactions with him beyond All-Star Games, but they did meet up with Gwynn's Padres in the 1998 World Series. The Yankees of course had a dominant team that year, one of (if not the) best in the history of baseball, winning 114 games and losing only two games in the playoffs to finish at a remarkable 125-50.

However, Gwynn's Padres were no pushovers. They won a franchise record 98 games in '98 to clinch just their third NL West title in their then-29-year history. Behind the masterful and intense Kevin Brown, a steady rotation that featured former Yankee Sterling Hitchcock, and Cy Young runner-up closer Trevor Hoffman, their pitching staff ranked third among all NL teams in ERA with a 3.63. In addition to Gwynn, who missed his fifth straight batting title but still notched a .321/.364/.501 triple slash at age 38 with a 133 OPS+, the Padres boasted underrated 50-homer slugger Greg Vaughn and hard-hitting third baseman Ken Caminiti, the '96 NL MVP who reached a 132 OPS+ in '98 and also sadly fell to an early demise at age 41 in 2004 due to heavy drug use.

What was the Padres' reward for such a great season? They were granted to opportunity to play against the winningest teams in Houston Astros and Atlanta Braves history. Undaunted, Brown struck out a Division Series record 16 Astros in the playoff opener, former Yankee playoff hero Jim Leyritz crushed a late solo homer to win Game 3, and Hitchcock outpitched Randy Johnson to eliminate the Astros in just four games. Then, the Padres baffled the baseball world by jumping out to a 3-0 lead in the NLCS over the 106-win Braves thanks to a 10th inning homer from Caminiti in Game 1, a three-hit shutout by Brown in Game 2, and Hitchcock again outpitching an ace, Hall of Famer Greg Maddux, in Game 3. The Padres dropped the next two games to became the first team in history to allow a Game 6 after leading 3-0 in a series, but eventual NLCS MVP Hitchcock stopped worries of a collapse by going into Turner Field and tossing five scoreless innings against Hall of Famer Tom Glavine. The Padres put up a five-spot against Glavine in the sixth and they won their second NL pennant.

Again, they were forced to play against a team that had accumulated more wins than any other team in franchise history. It was Gwynn's second career trip to the series after the Padres fell in five games to the Tigers in '84, a 14-year gap between Fall Classics. He was excited to be back to compete for a championship again and was enthralled by the prospect of playing in Yankee Stadium. Gwynn made a trip to Monument Park prior to the World Series opener just to take in the aura of the hallowed grounds and left a wonderful impact on Yankees fans. It wasn't just a matter of respecting him from afar anymore--the man lived and breathed baseball, and his extremely friendly disposition just made him even more likeable.

Unfortunately for the Yankees' vaunted pitching staff, while Gwynn was impressed by Yankee Stadium, he was not intimidated at all. San Diego jumped out to a 5-2 lead thanks to two homers from Vaughn and a three-hit game from Gwynn. Although he wasn't much of a slugger with 135 career homers, he even took David Wells to the left field upper deck with a two-run homer in the fifth inning:

Sadly for Gwynn, Brown was removed from the game win the tying run coming to the plate and two outs in the seventh, and San Diego's shoddy middle relief blew the game. The next day wasn't much better as Andy Ashby was pummeled and though Gwynn had another hit, the Padres lost 9-3.

Game 3 was the first World Series game at San Diego's Qualcomm Stadium in quite some time and the raucous crowd was ready to see Gwynn and the Padres finally win one. For the fourth time in the playoffs, Hitchock faced a formidable former Cy Young-winning foe in David Cone, and he kept the Padres in the game with six scoreless innings. Gwynn gave him a lead with a two-run single to bring him home after a leadoff hit in the bottom of the sixth, and Gwynn himself came around to score on a sacrifice fly to make it 3-0, Padres. By the time Gwynn would bat again though, the Yankees had rallied off Hitchcock and Hoffman on the strength of two Scott Brosius homers to take a 5-3 lead, deflating the San Diego fans. However, Gwynn refused to let the Padres fall out of it in the half-inning that immediately followed the decisive Brosius homer. Batting against incomparable Yankees closer Mariano Rivera with a runner on second and one out, Gwynn singled again, and Vaughn brought the runner home with a sacrifice fly to make it one-run game. With the tying run on the bases and the go-ahead run at the plate in the dangerous Caminiti, Rivera fanned him to escape the jam and threw a scoreless ninth to clinch the third game.

Facing a sweep, Gwynn was one of only four Padres to get a hit in Game 4. The Yankees scored three runs off Brown, who was pitching on three days' rest, and the Padres could do nothing against Andy Pettitte. Gwynn's sixth inning single was erased on a double play. Trailing by three with one out and a runner on in the eighth, Gwynn knocked Pettitte out of the game by smashing another single up the middle to bring the tying run to the plate with Vaughn, Caminiti, and Leyritz due up, who could all go deep. It was all for naught, as Jeff Nelson and Rivera completed the inning without any runs crossing the plate, and Gwynn never got another chance to bat. Rivera threw a perfect ninth, and the Yankees swept the Padres.

No one could pin any blame on Gwynn, though. He had posted one of the finest World Series batting lines of all time by batting .500/.529/.688 with just one strikeout in the four games. The 15-time All-Star had fully demonstrated his abilities to the Yankees, and all were fully amazed by what the Padres' all-time great had done. That is the memory that countless Yankees fans are left with today now that Gwynn has left us. He was an unbelievable competitor, an all-around wonderful man to be around, and a Hall of Fame player who the baseball community will dearly miss.

Rest in peace, Tony Gwynn. Fans of the Yankees and all other teams around the game doff their caps to you and have your family and the Padres organization in their minds. 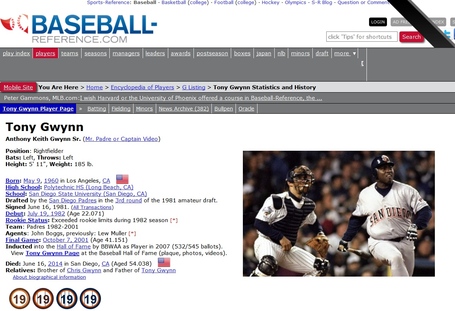 Maddux was convinced no hitter could tell the speed of a pitch with any meaningful accuracy. To demonstrate, he pointed at a road a quarter-mile away and said it was impossible to tell if a car was going 55, 65 or 75 mph unless there was another car nearby to offer a point of reference.

"You just can’t do it," he said. Sometimes hitters can pick up differences in spin. They can identify pitches if there are different releases points or if a curveball starts with an upward hump as it leaves the pitcher’s hand. But if a pitcher can change speeds, every hitter is helpless, limited by human vision.

"Except," Maddux said, "for that [expletive] Tony Gwynn."

Greg Maddux, who struck out 3,371 batters, 10th most in history, faced Tony Gwynn 107 times in their careers. He never struck him out. Ever.