Yangervis Solarte's future may be an uncertainty, but his plate discipline is not

While it's unclear whether Solarte can keep up his offensive output, his plate discipline shows that he might be able to do just that.

Share All sharing options for: Yangervis Solarte's future may be an uncertainty, but his plate discipline is not

Nothing is more unpredictable than the unknown. Minor League baseball players are not necessarily the unknown, but they're certainly the unpredictable. But what makes Yangervis Solarte unpredictable and unknown is that not only he has no Major League track record before this season, but that his current output is contradictory to what we had known. So what do we know? All we know is the data that Solarte has given us since Opening Day, and that's all we can use to extrapolate whether he can continue to be as good as he has been. I'm not going to say that I can predict whether Solarte will be league average or better than league average in the future, but there are some things I can reasonably predict given what is available, something that I know is very good.

Yangervis Solarte has an excellent approach at the plate. Solarte does exactly what you want at the plate: fewer swings outside of the zone (27%), contact when you do swing outside the zone (75.8%), contact almost always (!!) in the zone (95.7%), and very few swings and misses overall (4.6%). Solarte's Z-Contact% mark of 95.7% ranks third in all of baseball. That's all fine and good, but is that at all sustainable? He may have a league average or better approach, but can that correlate to future plate discipline? The following chart shows the correlation between year one and two for each stat of plate discipline, courtesy of Steve Staude's correlation tool:

Attributes like plate disciplines are not flukes. When one has at least 300 PA (Solarte has 229), one can reasonably expect that that is the hitter's approach within a certain margin of error. While wRC+ and BABIP can fluctuate for a variety of reasons from year to year, plate discipline in one year is pretty predictive of the following year. We know Solarte to be a ~10% BB% and 10% K% hitter, and that's what we should expect him to be. But what does that matter? Even if he makes consistent contact and does not swing and miss, why should that make us excited? Ben Revere is the King of Contact, and he is a career 80 wRC+ hitter.

While Revere is a high contact hitter, he is a singles hitter with a career ISO of .046. Solarte, on the other hand, has an ISO of .159, one that isn't incredibly high but is certainly respectable. What is important, though, is where his ISO is the highest. Take a look at his ISO in the zone heatmap: 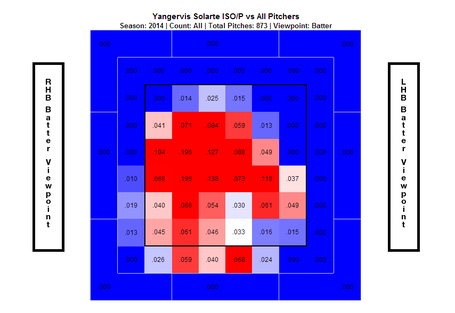 This is incredibly important because Solarte has the highest ISO in the area where he makes the most contact: the heart of the zone. That's an excellent combination--an ISO hot spot combined with an area of high contact. And via the same methods before, is ISO predictable from year to year? It's not as predictable as the plate discipline statistics, but still relatively so; the correlation from year to year is .6899 with an R-Squared of .4796. And while it isn't a certainty his ISO will be sustained, he won't be completely different in the future. And while pitchers will definitely try to pitch around the zone, his plate discipline statistics regarding outside of the zone will hold, numbers that are favorable. And when a pitcher makes a mistake, he is sure to punish them.

I don't know if Solarte can maintain a 129 wRC+ pace. Probably not. But plate discipline is a quality that hitters cannot just change--Alfonso Soriano never had a fluke year of low SwStr%, for example. We may not know what to expect from Solarte next year (or even next month), but we can be pretty confident that we understand his approach at the plate. That fact can inform a prediction of his future performance, and a high Z-Contact% with hard contact will certainly help us in making that prediction. He could fall off a cliff for all we know, but it won't be because of a poor approach.