Disappointments around the American League keeping the Yankees close

The Yankees sit at .500, but they are far from the only AL let-down.

Share All sharing options for: Disappointments around the American League keeping the Yankees close

It hasn't been the best of starts for the Yankees in 2014. With precisely 100 games to go, they sit at an even .500, 31-31, and their high-water mark is a mere five games over .500, last achieved on April 27th. Injuries to Ivan Nova, CC Sabathia, Michael Pineda, and Carlos Beltran have been part of the problem, but so has general ineffectiveness from several members of the offense, most notably Brian McCann, Alfonso Soriano, and Derek Jeter. Fortunately, standout rookies Masahiro Tanaka (no surprise) and Yangervis Solarte (huge surprise) have led the way to keep the team afloat.

The Yankees can credit the youngsters, but they should also give a big hat tip to the rest of the American League. Even though the Yankees are just a .500 team right now, they are right in the thick of things. They are definitely not the only team to disappoint its fans so far. Here are the standings that Baseball Prospectus's PECOTA projections calculated at the beginning of the season: 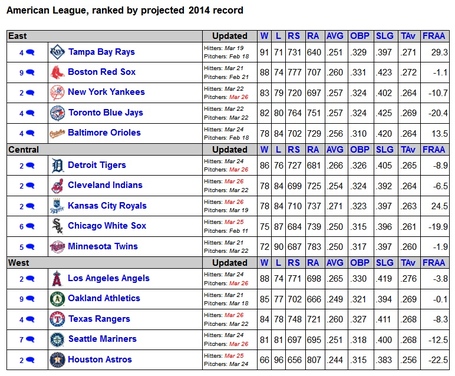 Compare those standings to what they look like now: 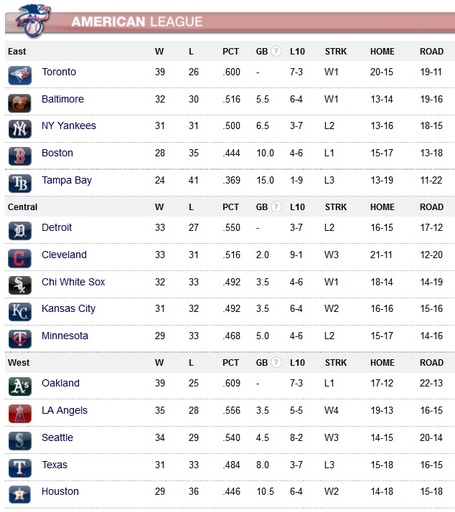 This is not a knock on PECOTA; many people around the game figured that the standings would look closer to what PECOTA estimated in the spring. Aside from a few mild bumps up, the Blue Jays are the only team that has greatly exceeded expectations thus far. The Yankees were projected to finish behind the Rays and the Red Sox, but both teams have bombed so far, especially Tampa.

Several prognosticators had the Rays either winning the division or making the playoffs via the Wild Card. Instead, they have inexplicably become the worst team in baseball. Losing southpaw Matt Moore for the season didn't help, but most of their disappointments have come from healthy players. Wil Myers is going through an ugly sophomore slump, and all of Evan Longoria, Ben Zobrist, and Yunel Escobar are performing below their career norms. Catching has been a complete cesspool, as Rays catchers have hit a combined .170/.240/.236, a 38 wRC+ that even Chris Stewart would laugh at, a figure by far the worst among all 30 teams. Former Yankee Jose Molina has yet to notch an extra-base hit in 102 plate appearances, leading to a dismal -12 wRC+. Grant Balfour has been dreadful in his return to Tampa and the bullpen's been terrible outside of a few middle relievers. The team recently endured a 10-game losing streak and are in a free fall, having dropped 13 of their last 14 games. The Rays are now 15 games back of the Blue Jays in the division, and their season is all but over already. That's what you get for employing ginormous scumbag Josh Lueke.

The Red Sox are certainly not quite as buried as the Rays, but few times have baseball fans witnessed a World Series champion stumble so badly out of the gate. Boston was going about its business with a mediocre 20-19 record on May 14th until they promptly went through a 10-game losing streak of their own. They bounced back with a seven-game winning streak, but since that streak was snapped, they have quickly reverted to their previous form, losing six of seven games. No outfield in baseball has performed worse than the Red Sox; Jonny Gomes has been just okay with the bat, but Jackie Bradley Jr., the Grady Sizemore experiment, Daniel Nava, and the injured Shane Victorino have all been horrible. Not even the efforts of David Ortiz, Mike Napoli, and rookie standout Xander Bogaerts have been able to lift the Red Sox from the bottom half of the league in offense. Jon Lester, John Lackey, and a superb bullpen outside of Edward Mujica have prevented the pitching statistics from looking too bad, but like the Yankees' rotation, it gets ugly in a hurry after the first couple starters. Jake Peavy, Clay Buchholz, and Felix Doubront have been atrocious in their starts, and they've combined to make just over half of Boston's 63 total. Boston's not out of it, but they have an even greater deficit to overcome than the Yankees.

Although the Red Sox and Rays' struggles have been the story of the AL so far, the Rangers have been a disappointment so far too. Their middling 31-33 record belies their woes. I don't know which baseball gods the Rangers pissed off before the season, but their injury problems are already comparable and then some to the 2013 Yankees. To wit:

Oh and just to add insult to injury (injuries?), Yu Darvish missed a start with neck stiffness and top prospect Rougned Odor (capably filling in for Profar) recently strained his shoulder on a pick-off play. It hasn't helped that Elvis Andrus has struggled so far, too. It's due to the fine work of Darvish, Adrian Beltre, Shin-Soo Choo, Alex Rios, and closer Joakim Soria that the Rangers haven't plummeted from the injuries. Nonetheless, the Rangers also have their rotation problems, as after Darvish, it's a hot mess. Even with Darvish's 2.36 ERA and 2.57 FIP, the team is dead last in the AL in ERA (4.60) and third-to-last in FIP (4.19). The Rangers are hanging tight, but how much longer can they last?

The Yankees should consider themselves fortunate to be where they are given how much some of their early projected competitors have struggled. Hell, they're tied with Texas in the win column despite all of the Rangers' injuries. If the Yankees can find a way to go on a surge now while these teams are stumbling, then it will slightly decrease the pressure to win later while their competitors inevitably go on good streaks of their own. Alternatively, trade Austin Romine to Texas for Darvish. Get it done, Cash.