Share All sharing options for: The time Superman saved Yankee Stadium from Godzilla

Flash Fact: I like comic books. I don't read them much anymore, but I still enjoy an entertaining comic book adaptation.

Another Flash Fact: I'm a sucker for crossovers.

Recently, I was watching the Max Fleischer Superman cartoons*, and in one episode, the most surprising things happen. First of all, a giant dinosaur is discovered to be frozen solid in the Arctic and is put on display in a museum until it inevitably thaws and goes on a rampage across town. I thought, hey, cool crossover of Superman vs. Godzilla, but then again, this is 1942 and Godzilla wouldn't be released for another 10 years. Whatever.

*For you non-nerds, the Max Fleischer Studios/Famous Studios Superman technicolor shorts were produced between 1941 and 1943 and are considered to be one of the most influential cartoons in comic book and animation history, even to this day.

Yes, this is a baseball blog, I'm getting to that part.

The giant monster seemingly comes across Yankee Stadium, and I'm like oh man, the Yankees:

Comic books and Yankees, in a cartoon together. This is awesome. But, yeah, that's totally Yankee Stadium. I mean look at it. This is 1942 Yankee Stadium, like it looks now, but better and a castle."Godzilla" is clearly coming out of the Harlem River, having just destroyed a bridge (the Macombs Dam Bridge?) in the previous scene to attack baseball. 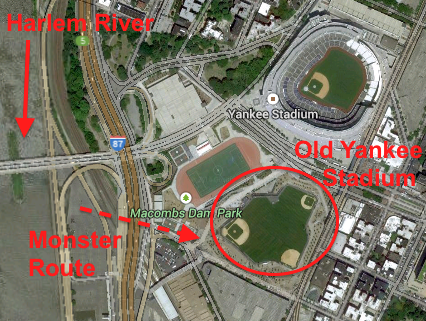 Then Lois Lane runs into the building the giant monster is approaching, because that's what Lois Lane did in these cartoons; insane things in the name of journalism. Sure, it probably says Metropolis Stadium, but it really wants to say Yankee Stadium.

Wait, is this Yankee Stadium or the Roman Coliseum? Fleischer and his artists are clearly trying, but they obviously never stepped inside the place before and didn't have the internet for reference. I'd like to think they got the crowd right, though.

I would love to know who was playing that day, but unfortunately, this short was released in February, before the season started. At this point, the franchise was coming off their 1941 World Series victory against the Brooklyn Dodgers, a series that featured the famous "Dropped Third Strike." It was ninth championship in franchise history and their first matchup against their Brooklyn rivals. The outcome of the series might be the reason Fleischer didn't have the monster peering over Ebbetts Field instead.

The '41 squad was headlined by Red Ruffing, Lefty Gomez, Bill Dickey, Joe Gordon, Charlie Keller, a 23-year-old Phil Rizzuto, and a 26-year-old Joe DiMaggio. This is what their Opening Day lineup looked like and their lineup, on this fateful day, would likely look similar: 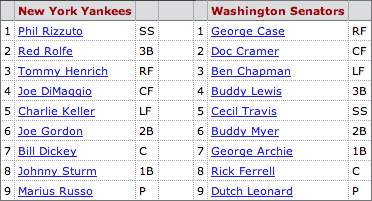 I'd like to imagine Phil Rizzuto looking up into the sky with a "Holy Cow!"

But back to the action. Superman, seeing the "Godzilla" about to ruin baseball, decides to do sports and stop it with the broken piece of an extension bridge.

Not the best mechanics, but it gets the job done. I'd like to see what his bat flip looks like.

Sadly, all of dinosaur kind would have to wait another 61 years before Hideki Matsui made his debut at Yankee Stadium. Superman preserved the Stadium's facade for another 30 years before George Steinbrenner decided to give it a facelift.

And there you have it. I hope you enjoyed baseball's cameo in the middle of your superhero time; I know I did. You can watch The Arctic Giant short here. Baseball shows up at the seven minute mark.