Umpire's different judgments on the play might lead to some angry managers in the future.

One of baseball's big off-season stories was the plan to adapt some kind of rule against brutal home plate collisions that have caused major injuries over the past few decades to numerous catchers, from Ray Fosse to Buster Posey and the oft-concussed Mike Matheny and Jorge Posada. The rule was officially passed today, and here it is, courtesy of CBS Sports:

Interestingly, it is not a complete ban on home plate collisions of any kind.

The first rule appears to protect the catcher who chooses to stand off to the side of home plate to receive, much like Posada used to do. That prevents the runner from going out of his way to take the catcher out in order to ensure that he is safe; instead on close plays, he must slide into home plate naturally, much like Sid Bream did on the famous play to end the 1992 NLCS:

And hey! That was an unbelievable ending to a playoff game. No harm done and the catcher fine. If Bream had make an attempt to take catcher Mike LaValliere out, he would have been called out. That seems fair; with a play at the plate, there's little reason to destroy the catcher if a legitimate slide can be made without the catcher standing in the way.

The second part of the rule looks like it's designed to ensure that the runner is not tempted to take the catcher out. The catcher will not be allowed to stand in front of home plate without the ball coming his path. Here's where the situation could get dicey.

It is completely up to the umpire whether or not Brian McCann could have fielded the ball without getting into the runner's path. On throws from right field and most throws from center, there would thus be little reason for the catcher to be blocking home plate since the throw is received up the middle or on the first base side. On throws from left field though, as long as it is not off-line like Barry Bonds's was in the clip above, the catcher could move up the third base line a little bit to receive the throw and would seem to have a legitimate claim as to why he happens to be blocking home plate--he wants to receive the throw and apply the tag as soon as possible. Under these circumstances, how could an umpire call it a violation of the rule? A good example occurred in the end to another excellent playoff series in the 2003 NLDS:

Ivan Rodriguez had to move into J.T. Snow's path to try to tag him out as the tying run. Under the new rules, it would seem these collisions are allowed, a move that might help pacify those who do not see the home plate collisions as much of a problem. I can't quibble too much with that--it's unfortunate that the collision has to happen, but there is really no other way for Snow to try to score or for Pudge to cover the plate since he has to tag him.

Since it will probably be referred to as the "Buster Posey Rule," it should come as no surprise that a play like this will likely no longer be allowed by MLB:

Posey handled the throw from right field and once he went to receive it, he was not standing directly in Scott Cousins's line toward the plate, even at the last moment: 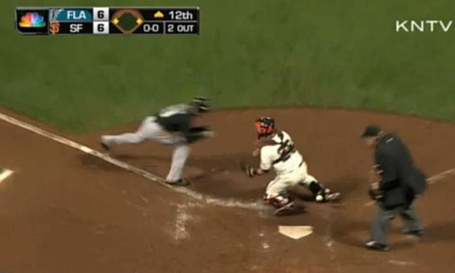 Posey (who incidentally did not have control of the ball) was not completely in front of home plate. The vast majority of the third base and foul territory sides of home plate are open, so Cousins could have gone for a hook slide or head-first diving toward foul territory with his hand aiming for home plate, but instead, he went to take the catcher out.

Needless to say, all collisions are different, and variance in catcher and runner positions are sure to stew some controversy by the time a close play comes around. For those sad about manager/umpire bickering departing the game with the advent of the new instant replay rules, do not worry. This rule contains enough umpire situation interpretation that it is all but certain to spark anger in the manager whose team does not benefit from the ruling.

"How was that not obstruction of home plate?! That catcher's ass was all over it, you blind sunuvabitch!"

"What do you mean, SAFE?!' My man had to handle the throw in that position to even try to tag that asshole out! Way to make the game all about YOU, ya asswipe!"

Reactions like these and many more are sure to come during the 2014 season. Obviously it's a very tricky rule to write out, so I cannot blame MLB too much for not clearing up every possible scenario. That's damn near impossible considering how much randomness baseball offers on a nigh-everyday basis. It is an attempt at improving catcher safety that I support, but I would not be at all surprised if after the first full season of this rule and observing its various instances of enforcement, it is altered somewhat to clear up some of the grey areas. Overall, it's a good place to start.

What do you think of the new rule?

Per CBS Sports and Matt Snyder, Cardinals manager and former catcher Mike Matheny noted his concern about the vagueness, too:

Matheny: The bad thing is there's that gray area. There's still that 'Am I going to run over him or not? Is he really blocking the plate or is he not?' There are going to be those plays where the throw takes you a little up the line more than you want and you kind of lose your position ... I think there are still going to be some train wrecks at home plate. I'm just encouraging my guys to do what they can to avoid it -- if it is avoidable."

Snyder: This, Internet Tough Guys, is coming from a guy who caught 1,285 games in the majors and won four Gold Gloves. I'm sure he's just part of the "wussification" process, though, right?