Yankee Stadium and the hypothetical homer jump from the newest Yankees

Homer-happy Yankee Stadium has a history of lifting new players' home run totals, so how do their recent acquisitions' previous performances translate to their new home?

Share All sharing options for: Yankee Stadium and the hypothetical homer jump from the newest Yankees

Yankee Stadium is an outstanding park for hitters, especially those who can hit left-handed and aim for the short porch in right field (#HotTake). For pretty much their entire existence with the exception of old Hilltop Park and the brief two-year foray to Shea Stadium in the '70s, lefty hitters have been able to take aim at cozy targets in right field, from the Polo Grounds to the three different iterations of Yankee Stadium (original, remodeled, and new). The Yankees' lineup took a serious hit in power with the loss of Robinson Cano, who was pretty much their only legitimate homer source during the 2013 season until they traded for Alfonso Soriano in late July.

Although Cano is gone, the Yankees signed four players in the off-season who are highly likely to combine to make up for Cano's absence and then some in the power department. Only four switch-hitters in baseball history have ever hit more home runs than Carlos Beltran (358), and with nine more, he will pass Lance Berkman for fourth on that all-time list. He has sustained that power into his mid-30s by belting 78 homers over the past three seasons, an average of 26 per year. Beltran is joined in 2014 by three other lefties with power potential. Brian McCann is a catcher with pop in his bat, and he has been a safe bet for 20 homer in seven of his last eight seasons. Jacoby Ellsbury only has one big homer season on his record, but it was a 32-dinger show just two years ago--in a cozier park for lefties than Fenway, it shouldn't be hard for him to reach double digits. Infielder Kelly Johnson is overlooked, but he has also been good for double-digit homers in six of the past seven years.

While it's fun to simply dream about these players shooting bombs into the short porch, it is interesting to evaluate how these players might have performed with Yankee Stadium as their home park in recent years. Thanks to Katron.org's useful spray chart overlay tool, it is possible to take these players' home spray charts and put them in the more accommodating environment of Yankee Stadium. Katron.org notes that every location is where the ball was fielded by a player, not where it landed, so there could be some variance in there regarding the ball's downward arc. Obviously, these spray charts can only tell us so much since they can't exactly indicate whether or not the ball had the height to get out of the park, but they are still fine estimates. 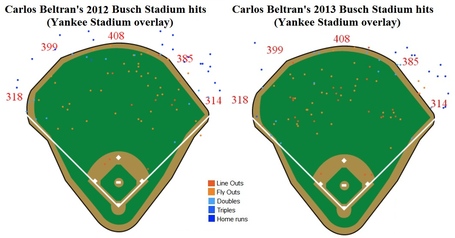 Based on Beltran's previous two years of spray charts playing at the Cardinals' Busch Stadium, he stands to possibly gain the biggest boost of all from playing at in the Bronx. At least seven of his 2013 non-homer balls in play seem likely to have gone over the wall at Yankee Stadium. That would have pushed his 2013 homer total to 31. It's optimistic, but boy would that be nice. 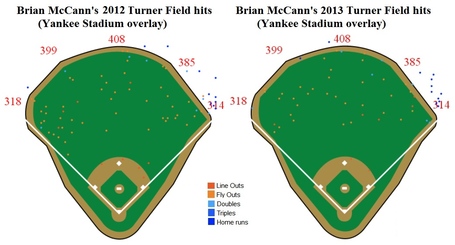 Somewhat surprisingly, few of McCann's long drives would have been assisted by cozier dimensions than the Braves' home of Turner Field. None of his 2013 non-homer balls in play appear to have had the distance to get over the Yankee Stadium fence. So perhaps the talk about McCann's swing being perfect for Yankee Stadium is a little overstated; when he gets a hold of one, it seems to have the power to get out of any park. Still, there's little doubt that he would prefer 314 down the right field line instead of 330. 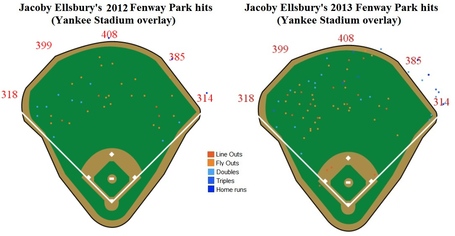 After a collision with Reid Brignac sapped Ellsbury's power in 2012, he had a much better year in terms of power in 2013. It was no 2011 of course (for the record, he could have had five more homers that year at Yankee Stadium, an overall jump to 37 on the season), but despite only a slight difference in homers (four in 2012, nine in 2013), he definitely had more of a charge in his bat. That is evidenced by jumps in slugging percentage (.370 to .426) and wOBA (.300 to .343), and it is also apparent in the home spray chart comparison. Whereas none of his non-homer balls in play at Fenway in 2012 would have even come close to going out in Yankee Stadium, he might have nearly doubled his 2013 home run total had he played at Yankee Stadium for half his game. Seven drives appear to have possibly gone out of Yankee Stadium. Ellsbury's power could very well catch Yankees fans by surprise in 2014 thanks to Yankee Stadium. 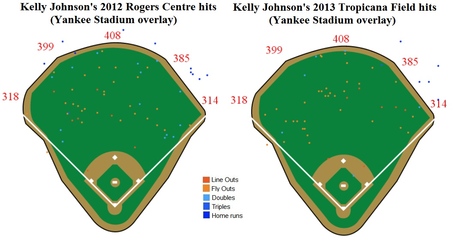 Way to end the exercise on a dud, Kelly. None of his non-homer 2012-13 drives appear to be that close to going over Yankee Stadium's walls either. The Rogers Centre and the Trop treated him equally.

Checking spray chart park overlays do not tell the whole story about plate appearance results, but they do add some credence to the hope of a better power lineup in 2014. The short porch beckons. The Yankees just have to hope that the results can come close to the expectations.

Next Up In MLB