They called him "The Curveless Wonder." The more you know! 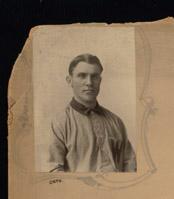 One of the benefits to the long process of creating and writing these lists is learning about players who I knew extremely little about prior to research. In some ways, it's incredible that 99% of Yankees fans also probably have no knowledge about a man who threw 102 complete games for them with impeccable control and an ERA well under 3.00, but such are the consequences of both pitching in the Deadball Era and pitching for the Yankees franchise during the mostly-dark first decades of existence prior to the arrival of Babe Ruth.

This is Al Orth, a man born so long ago that the National League was not even founded yet. Would you believe his nickname was "Smiling Al?" He was 31 when he joined the then-Highlanders in the middle of 1904 and perhaps represented the very first in a long tradition of Yankees midyear veteran acquisitions to help them attempt to clinch a playoff spot.

Early life on the Phillies

Orth was born two months prior to President Ulysses Grant's re-election over New York Tribune founder Horace Greeley (who died three weeks after the election), future Vice-President Thomas Hendricks, and a smattering of other candidates. He was born in Missouri, but grew up in Hendricks's state of Indiana. While not much is known about Orth's youth, he was raised in Danville just outside of Indianapolis, and he went on to attend little-known DePauw University in Greencastle, where he honed his craft as a young pitcher.

Some reports say that Orth pitched for semi-pro teams around that time in Lebanon and Indianapolis. His first big break came when the Lynchburg Hill Climbers of the Virginia League caught his attention with an offer to join their team in 1894. The 21-year-old accepted, and though there isn't a record for his 1894 stats, he thoroughly dominated his opposition the next year by pitching to a 2.51 ERA in 34 games, completing 28 of them with three shutouts and a 1.190 WHIP. In those days, aspiring major leaguers could pitch for years in the minors before getting noticed, but fortunately for Orth, he only had to wait about a season and a half.

Major league scouts were thoroughly impressed by the righthander's pitching dominance and excellent control, and the Pittsburgh Pirates told Lynchburg that they would buy him for $500. Team officials were so confident in Orth's marketability that they declined, and their intuition paid off, as they soon after sold Orth to the Philadelphia Phillies for double the Bucs' offer. Orth immediately jumped to the Phillies, who at the time were mired in seventh place in the 12-team NL.

A couple weeks shy of 23, Orth made his MLB debut on August 15, 1895, pitching a couple mop-up shutout innings at home for the Phillies in a 23-9 whooping of the New York Giants. In that first game, he also demonstrated another aspect of his game that would be an Orth trademark--a prowess at the plate that was superior to the typical pitcher. He had slugged .436 with 15 extra-base hits in 149 at-bats in Lynchburg, and on his first pitch in the majors, he belted a double off the wall at the Baker Bowl and scored a run. Over the remainder of the season, he made 10 starts, completing nine of them and winning eight thanks to some strong run support, a 3.89 ERA (83 ERA-), and a 3.91 FIP (83 FIP-). The team rallied behind its burgeoning ace and went 30-12 the remainder of the season to end up in third place at 78-53, a .595 winning percentage that would translate into 96 wins over a 162-game campaign. Following that rookie season, Orth married his wife, Jimmie Allen, who he would have two sons with later in life, John and Allen.

Over the next six years, the Phillies were up and down, but Orth remained a steady presence in the rotation, averaging 27 starts, 23 complete games, and 236 innings per year. Although he didn't strike out many batters, his pinpoint control led to a minuscule 1.86 BB/9, and solid marks in ERA (3.47, 91 ERA-) and FIP (3.46, 93 FIP-). His 18.8 fWAR ranked eighth among pitchers in baseball over that time. Along the way, he achieved the unusual feat of starting both ends of a doubleheader in one day and completing both of them with victories on October 13, 1898 against the Brooklyn Superbas. Even going back to baseball's old times, only 44 pitchers have ever done that.

Orth capped off his career in the City of Brotherly Love at the turn of the century with an outstanding 1901 campaign in which he posted an otherworldly 1.00 WHIP, 1.0 BB/9 (both led the league) and a 2.27 ERA (a 69 ERA-). His six shutouts were also tops in the NL. At the end of the season though, he followed many of his National League compatriots in jumping over to the upstart new league, the American League, which had just completed its first at the major league level. The Washington Senators reportedly offered Orth $3,500 to join them, and he took the offer, ending his seven-year career in Philly.

Al in the AL

The Senators brought Orth aboard hoping that he would be their new ace, but there's no way to sugarcoat it--he was a big disappointment in the nation's capital. Over two and a half seasons with Washington, he was battered to a 4.21 ERA (a 132 ERA-), and while he kept walks down, opposing batters hit close to .300 against him. Halfway through the 1904 campaign, Orth was at his worst with a 4.76 ERA and 188 ERA- in 10 games for the Senators, so Washington finally gave up on him by trading him to the New York Highlanders on July 20th in exchange for pitchers Tom Hughes and Barney Wolfe.

Orth's AL past was checkered, but pitcher/manager Clark Griffith had a positive impression on him from the get-go of the Highlanders' history in New York, as Orth beat them in their very first game in 1903. The upstart Highlanders were in the midst of a pennant race against the defending champion Boston Pilgrims, and Griffith realized they needed a starting pitcher to replace himself in the rotation since he was getting older and less effective. Along came Orth, who resurrected his career thanks to some help from his new teammate and baseball's best pitcher in 1904, Jack Chesbro.

The future Hall of Famer and 41-game winner in '04 helped Orth master the spitball, a crucial pitch for Orth, who was called "The Curveless Wonder" during his Philadelphia days of success despite not much movement on his pitches at all. Orth's delivery seemed effortless and while he was once able to get away with pitches since he had decent velocity while younger, it had decreased by the late 1890s, and Orth's "slow stuff" was not helping him as much in the AL as it did during his exceptional 1901 season with the Phillies. With an improved spitter that had "quicker break" in tow though, Orth dramatically turned his season around by pitching to a 2.68 ERA in 20 games, walking just 1.2 per nine innings and pitching to a 1.02 WHIP. Although a wild Chesbro spitter cost the Yankees the season in the penultimate game of the season against the Pilgrims, the Highlanders felt fairly confident about their future with Chebro and Orth leading the rotation.

Unfortunately, the Highlanders needed more than just a pair of strong pitchers to help them repeat their '04 success in 1905. The pitching staff behind the two aces was dismal, and they stumbled to a 71-78 season back in the second division. They rebounded in 1906 with superior pitchers behind them though in Bill Hogg and Walter Clarkson, and the second-best offense in the league helped Griffith's Highlanders to another second-place finish at 90-61, just three games behind the eventual champion White Sox. Orth led the charge with a career year at age 33, leading the AL with 27 wins, 36 complete games, 338 2/3 innings pitched, 7.7 rWAR, and 6.6 fWAR. If the Cy Young Award existed then, it would have been a tight race between Orth and... well, Cy Young.

AL standout to the minors in two years

The next year, the Highlanders continued the pattern of "one step forward, one step back with another sub-.500 season as Orth attained the ignominious feat of becoming the only pitcher in major league history to lead the league in wins one year and losses the next. However, that was also a byproduct of horrid run support, as Orth actually pitched slightly above league average with a 2.61 ERA (97 ERA-) and 2.37 FIP (94 FIP-). Alas, Orth declined further in 1908 with a worse season, and his longtime manager Griffith was fired after a 3-27-1 stretch in late June. Kid Elberfeld took over for Griffith, but it didn't really help.

Orth was ultimately cut in August, and he returned to his roots with his old Virginia League team in Lynchburg, where he completed the season as player-manager with 19 games played, both on the mound and in the field. During the next season, Orth was still serving that all-around role for Lynchburg and hitting .296 with a .379 slugging percentage when new Highlander manager George Stallings convinced him to return to the majors with a proposal. He would not pitch as much and instead be use more as a hitter since he had always done relatively well at the plate.

Orth thus only made one emergency start for the Highlanders, played six games at second (unimpressively, per legendary scribe Ring Lardner), and appeared in 15 others as a pinch-hitter. Although he hit .265/.359/.324 with a 115 OPS+ in 40 plate appearances, it was evident that his major league playing days were over. A forgettable 35-game stint close to his hometown with the minor league Indianapolis Indians of the American Association ended his professional career in 1910, and he returned to managing the Lynchburg team midseason.

Orth tried a new baseball role in 1912 when he joined the National League as an umpire, 11 years after he served as a doubleheader fill-in while with the Phillies. (Imagine an umpire crew today asking a player on one of the teams that day to try to be an impartial arbiter.) He was an umpire until 1917, then served as an athletic director for American troops in France during World War I. Orth lived out the remainder of his days in Lynchburg, which he had grown to love during his minor league stints there and occasions as a collegiate baseball coach for Washington and Lee University and the Virginia Military Institute. Long after the New York AL team had changed its name to the Yankees and achieved incomparable success, Orth died quietly at home at age 76 in 1948, a more than serviceable pitcher who probably deserves to be remembered far more than he actually is today.

Appel, Marty. Pinstripe Empire: The New York Yankees from Before the Babe to After the Boss. New York: Bloomsbury, 2012.